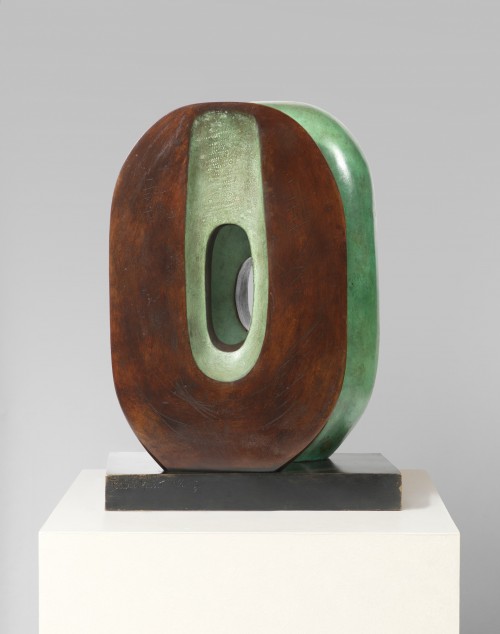 and stamped with the Morris Singer Foundry mark

Foundry, London in a numbered edition of 9+0

This powerful, imposing work derives from the large bronze Dual Form, 1965 (BH 396, 72 ½ inches height), cast in an edition of 7+0, all but one in public collections including Leeds City Art Gallery; Lancaster University; Rijksmuseum Kröller-Müller, Otterlo, The Netherlands; The Phillips Collection, Washington DC and the Portland Art Museum, Oregon. The cast situated outside the Guildhall in St Ives was given to the town by the artist to mark the conferment of the Honorary Freedom of the Borough of St Ives. Like the large-scale bronze, Maquette for Dual Form seems to be a replication and variation of a pierced Monolith; two shallow half-ovoids standing back to back, flattened at top and bottom, creating distinctive U shapes in their concavities. Penelope Curtis writes of the work: ‘A form that may seem familiar, but which has in fact been refined quite differently, with a very successful result, is the deep ‘U’ shape which we see in Dual Form, another large piece known from its dispersal on public sites around Britain. The variations on Dual Form date from 1965, but clearly go back to Curved Form (Oracle) of 1960, and Two Forms with White (Greek) of 1963, both in wood and in paint. The ‘U’ shape takes further

the more familiar aureole around the hole and, in slicing off the top, suggests a kind of infinite extension of the sculpture. This adds to the spectator’s involvement with the piece, a concern which was important to Hepworth at this time, and which shows that she was not unaware of what was happening in the work of younger colleagues, such as Anthony Caro and Phillip King, and of the move to bring sculpture down to ground level. In 1962 Hepworth was interviewed for The Studio, and pointed out: ‘It is easy now to communicate with people through abstraction, and particularly so in sculpture since the whole body reacts to its presence…people become themselves a living part of the work.’[1]

The mirrored yet divergent forms construct a brilliant play of contrasts between mass and space, plane and curve, smooth exterior and roughly textured recessions. Obliquely angled and placed off-centre on their base, the twin forms overlap and almost touch, but light and space can be seen between, as well as through them. Their circular and elongated oval openings offer a view through the sculpture uniting the space in front of and behind the work, recalling the artist’s first piercing of the block, seen at the time as imbuing the works with ‘air, intimacy and a sort of stereoscopic quality.’[2] The greatest and most vivid contrast afforded by Hepworth’s use of bronze is the exceptional colour, the warm bronze of the primary form set against the bright, Verdigris of the other (and its recession), like lichen-covered rock. The plaster for the maquette, at the Hepworth Wakefield, was built up using an aluminium sheet armature bent into shape onto which scrim was laid (whose texture can be seen in the recessed area of the brown form).[3] Plaster of Paris was then layered and worked using spatulas and the artist’s bare hands. When dry, Hepworth carved the hard surface with tools and ‘surform’ planes. As Sophie Bowness relates, the surface texture of the plaster and its related bronze, ‘its expressiveness and variety, was of great importance to Hepworth’[4] in order to ‘imbue it with my own life & feeling & calligraphy.’[5] ‘I only learned to love bronze’, she wrote to Ben Nicholson in 1966, ‘when I found that it was gentle and I could file it and carve it and chisel it. Each one is a “person” to me – as much as a marble.’[6] Hepworth, with her assistants’ help, frequently finished the bronzes by hand

when they returned from the foundry.

In 1965 a retrospective of Hepworth’s work was held at the Rietveld Pavilion, Rijksmusem Kröller-Müller, Otterloo in The Netherlands. She was made a Dame Commander of the British Empire and appointed the first female Trustee of the Tate Gallery. The following year, Barbara Hepworth: Drawings from a Sculptor’s Landscape was published. Writing in her obituary, Susan Bradwell suggests: ‘She enjoyed the numerous honours she received, but perhaps none as much as when in 1968 she was made a Bard and took the name Gravyor in a ceremony in fields outside St Just. In the same year both she and her friend the potter Bernard Leach were given the freedom of St Ives and Dame Barbara in turn presented Dual Form to the Corporation. It stands outside the Guildhall.’[7]

outside The Guildhall, St Ives. 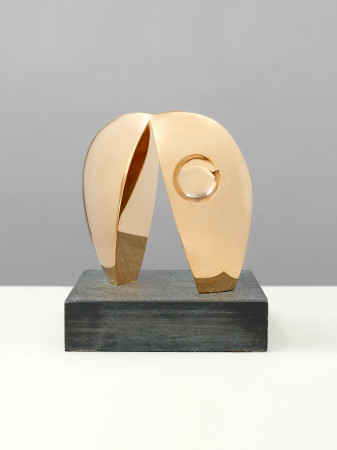 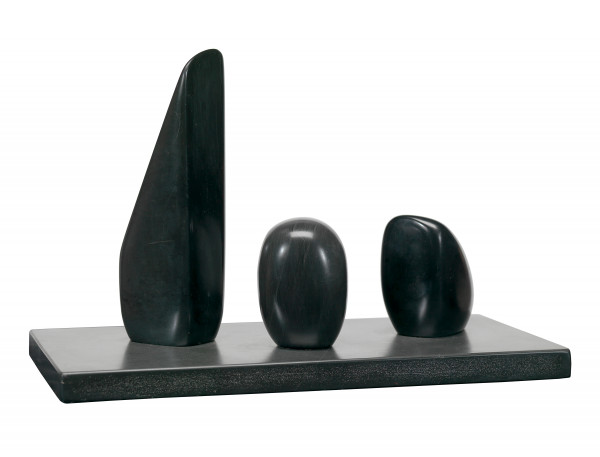