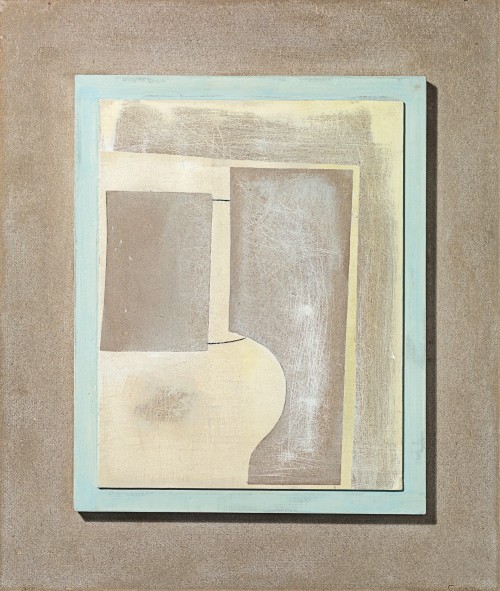 Philip Hughes Esq, acquired from the above, then by descent

In the year prior to his completion of March 62 (Phrygia), Nicholson had moved into a new home and studio near Brissago, Switzerland. Situated close to the Swiss-Italian border, Casa alla Rocca not only awarded the artist stunning views of Lake Maggiore and the surrounding mountains, the purpose-built workspace provided him with the ideal conditions for expanding his aesthetic practices. What followed was a period of prolific artistic activity – John Russell noted at the time that Nicholson had completed enough work to ‘kill off a man half his age’ – which, as can be seen in March 62 (Phrygia), resulted in a series of works that successfully refined and reinforced key themes and ideas that had long shaped Nicholson’s art.

March 62 (Phrygia) marks a distinct chapter in Nicholson’s lifelong preoccupation with the still life. The artist recalled that his commitment to the motif had its origins in being surrounded as a young boy by the paintings and collection of ceramics and glassware amassed by his father, the artist William Nicholson. In the 1920s, as he began to forge his own career as a painter, Nicholson’s adoption of the genre was significantly impacted by the ground-breaking developments of cubism, examples of which he first discovered in the modern art galleries of Paris. This was an experience that would stay with him and continue to resonate as he zealously explored the aesthetic potential of the still life theme over the following decades. In March 62 (Phrygia), Nicholson presents a simplified rendering of a goblet and mug, the handle of the latter suggested by the pencil marks that anchor and enliven the adjacent forms. Whereas the abstracted objects provide a clear compositional structure, the highly worked surface introduces a poetic, almost spontaneous quality, acting as both counterpoint and balance to the more considered elements of the work. In this, March 62 (Phrygia) relates closely to the artist’s celebrated abstract carved reliefs of the period; works which Nicholson admitted he liked ‘as a means of expression’ as they gave ‘so simply the structure […] & then one can pursue one’s idea on this basic building rather like a tree in spring grows its leaves.’

In March 62 (Phrygia) the varied textures and subdued palette certainly evoke associations with the natural and mineral world. Shortly before his move to Switzerland in 1958, Nicholson had stated that his still life paintings had become more ‘closely identified with landscape.’ During the period, from his base in Ticino, this was a factor increasingly shaped by his various trips across Europe, including tours of Italy and France, and significantly in 1959, his first visit to Greece, returning again in 1961. Nicholson had long been fascinated by the region and he had remarked in a letter to Barbara Hepworth many years earlier, that the ‘Greek country always looks very exciting as one can see all the lovely things that have happened just from the lie of the land […] it gives one an amazing idea of time.’ Enthralled by the ruined temples and rock-strewn landscape, set against the blue of sky and sea, this sense of an ancient place weathered over millennia by both human and natural activity, was a quality that clearly found its way into his work.

The association of March 62 (Phrygia) with classical antiquity is in turn alluded to in the work’s title. Located in present day Turkey, Phrygia was an Anatolian Kingdom (12th to 7th century BC), that straddled the ancient cultures of Greece and Persia. The Phrygians make an appearance in Homer’s Iliad, as allies of the Trojans, and King Midas in Greek mythology is said to be a ruler of the region. Whilst Nicholson was always clear that, with the exception of his landscapes, the title of a painting and relief was always the date, and the parenthesis was merely a way for him to remember the work, he did explain how this sometimes came ‘from a reminder of place or even a person or an experience, sometimes from some gramophone record or radio I’ve had on when working.’ Interestingly, whilst the artist had not visited the Phrygian region, he did acquire a number of antique Anatolian vessels during this period, the aged, worn appearances of which offer an interesting comparison with the tonal and textured qualities of March 62 (Phrygia).

Ben Nicholson was born in Denham, Buckinghamshire in 1894, the eldest of four children of artists Sir William Nicholson and his first wife Mabel Pryde. He spent his early education at Heddon Court, Hampstead and Gresham’s School, Holt before studying at the Slade School of Fine Art in London from 1910–11, where he met and befriended Paul Nash. Following graduation, Nicholson spent time in France and Italy before living in Pasadena, California for health reasons between 1917–18. He was declared unfit for active service during the First World War due to his asthma.

In 1920 Nicholson married the artist Winifred Roberts and they subsequently divided their time between London, Cumberland and Switzerland, often visiting Paris on the way. Having experienced Cubism first hand, he produced his first abstract paintings in 1924. That same year he held his first solo exhibition at the Twenty-One Gallery, London and was invited to become a member of the Seven and Five Society. Accompanied by the artist Christopher Wood, Nicholson visited St Ives, Cornwall for the first time in August 1928, where they discovered the painter Alfred Wallis who would become an important influence on them both. In 1931 he met the sculptor Barbara Hepworth, and within a year began sharing a studio with her in Hampstead. Together they held a joint exhibition at Tooth’s Gallery, London in 1932. Nicholson would go on to marry Hepworth after his divorce from Winifred Nicholson was finalised in 1938. From 1933 Nicholson became a member of Unit One and was invited, together with Hepworth, to join the group Abstraction-Création. He began making abstract reliefs in 1933 and a series of white painted reliefs the following year which would establish his international reputation. Winifred’s move to Paris in 1932 with their children meant that Nicholson visited often, enabling him to establish links with other artists there, including Georges Braque, Pablo Picasso and Jean Arp. In 1934 he met Piet Mondrian and played an active role in his move to Hampstead in 1938. Nicholson co-edited the publication Circle: International Survey of Constructive Art with the sculptor Naum Gabo and the architect Sir Leslie Martin in 1937.

In 1939 Nicholson and Hepworth relocated with the triplets (born in 1934) to Cornwall where he resumed painting landscapes and coloured abstract reliefs. His international reputation grew during the 1950s as a result of a series of large still lifes for which he received several important prizes. In 1954 he represented Britain at the Venice Biennale (alongside Lucian Freud and Francis Bacon) and was awarded the Ullisse prize. The following year the Tate Gallery held the first of two retrospectives of his work, the second being shown in 1969. In 1958 he moved to Switzerland with his third wife Felicitas Vogler (Hepworth and Nicholson having divorced in 1951) where he began to concentrate once more on abstract reliefs including a large wall relief made in 1964 for the Documenta III exhibition in Kassel, Germany. He was awarded the Order of Merit in 1968. Nicholson returned to England in 1971, living until 1974 in Cambridge and then in Hampstead where he remained until his death in 1982. 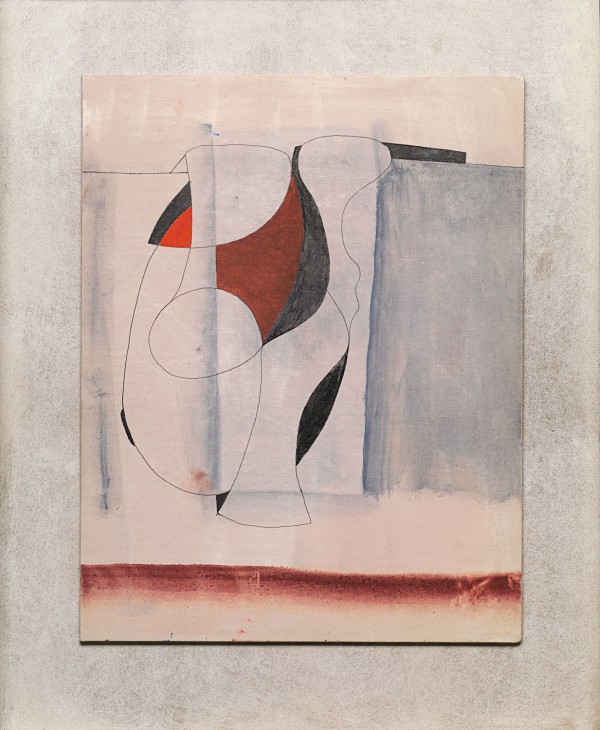 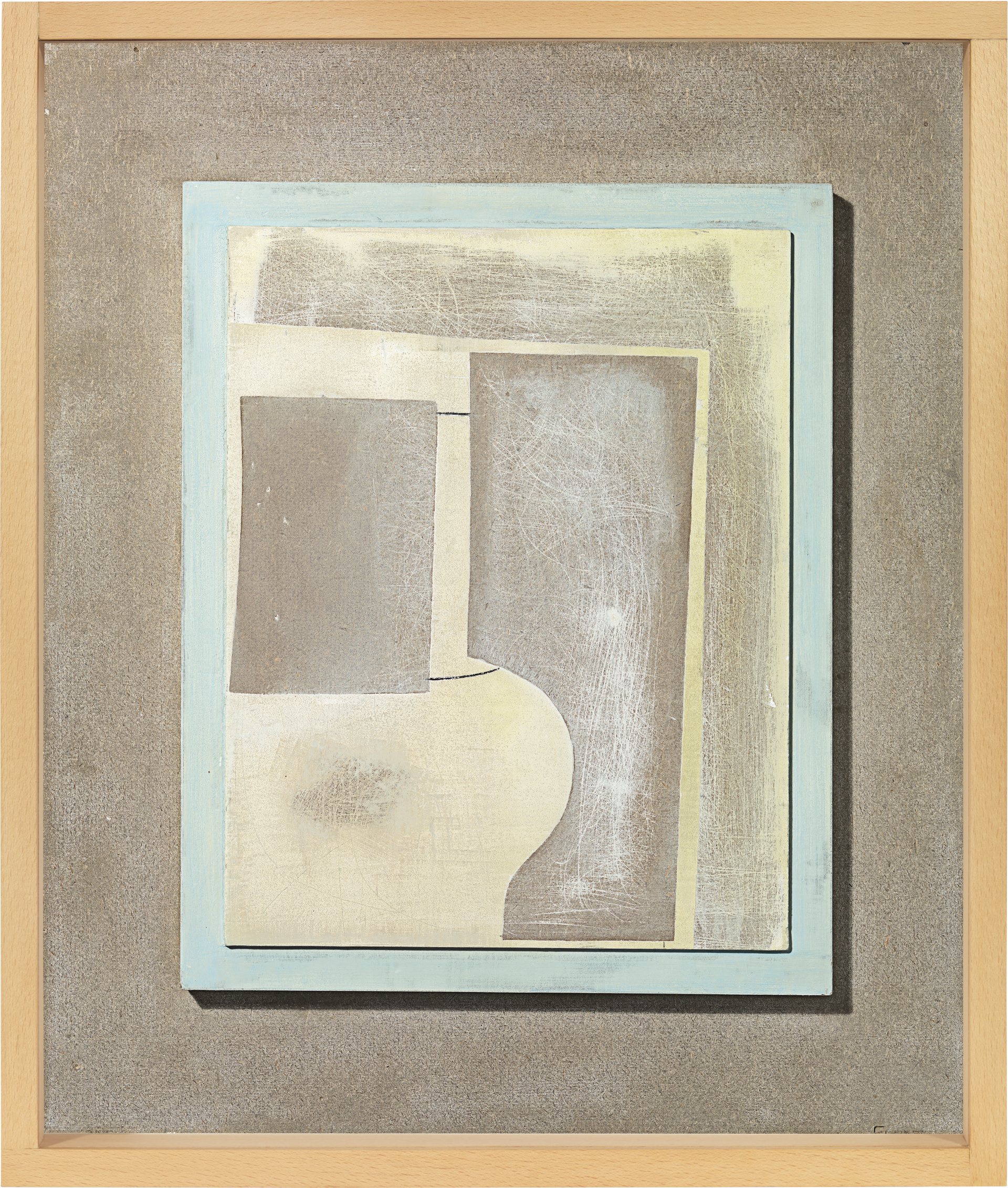