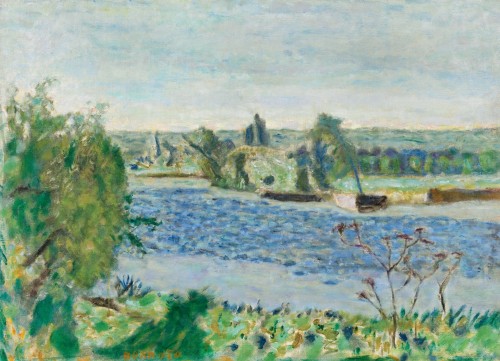 Bernheim-Jeune, Paris, acquired from the artist in 1927;

by descent to EH Phillips

In 1912 Pierre Bonnard bought a house, which he named Ma Roulotte (My Caravan), at Vernonnet on the Seine. It was a few miles from Giverny, where Monet had lived since 1883; the artists became good friends. From 1909 Bonnard had also discovered the Côte d’Azur, visiting every year and acquiring a home at Le Cannet, above Cannes, in 1926. His landscapes are a delightful alternation between the light of the Midi and the lush, green, rain-drenched Seine valley, or sometimes a dreamlike entwinement of the two.

Matin bleu, 1927, is close in spirit to La Seine à Vernon or La risée sur la rivière (private collection)[1], also painted in 1927 and part of a series of landscapes which Bonnard had begun at Le Vernonnet the previous year. Matin bleu shows the same interest in the textures of the water as La Seine à Vernon, with the deeper part of the channel being differentiated from the smoother waters near the bank. In Matin bleu, the smoother water is constructed from blended strokes of pale mauve, violet and eau-de-nil, while the deeper water is conveyed by agitated, oval strokes of darker purple, midnight blue and hints of green. The sparkling, snakelike energy of the river is echoed in the horizontal row of trees on the far bank, which is likewise constructed from juxtapositions of green and purple-blue.

While being sensitive to topography, Bonnard was interested in the abstract patterns of the landscape. As Nicholas Watkins comments, Bonnard was concerned to ‘integrate form and structure with an overall atmosphere of light’; he also saw a painting as ‘a decorative object in its own right’[2]. Bonnard described painting as ‘a sequence of marks which join together and end up forming the object, the fragment over which the eye wanders without a hitch’[3]. In Matin bleu, the emerald green shadow of the tree at foreground left provides the bridge which leads the eye to the riverbank. The plant at foreground right throws a network of stalks over the river, leading the gaze towards the strongly-lit and strongly-shadowed boats on the far bank.

Unlike the Impressionists, Bonnard did not paint his landscapes in front of the motif. He preferred to make small drawings and colour notes on the spot, which he translated into oil paintings in his studio. His landscapes are imbued with memory and emotion as well as the transient appearance of nature. He expressed his philosophy to Matisse in 1940: ‘During my morning walks I amuse myself by defining different conceptions of landscape – landscape as “space”, intimate landscape, decorative landscape, etc. But as for vision, I see things differently every day, the sky, objects, everything changes continually, you can drown in it. But that’s what brings life’[4].

This painting comes from the collection of Laughlin Phillips (1924-2010), son of Duncan and Marjorie Phillips, who amassed the largest collection of works by Bonnard in America between 1925 and 1954. Duncan Phillips (1886-1966), heir to a Pittsburgh banking and steel fortune, was an art critic who founded the Phillips Memorial Collection in Washington DC to honour his father and brother. Phillips believed in the vital connection between Old Masters and Modernism, hanging El Greco, Goya and Manet alongside Georgia O’Keeffe and Nicolas de Staël: this eclectic philosophy is still practised to great effect by The Phillips Collection today. Duncan Phillips corresponded with Bonnard for twenty years and included his work in the Phillips Memorial Gallery’s Tri-Unit Exhibition of Paintings and Sculpture in 1927, the year that Matin bleu was painted. He wrote of Bonnard in the catalogue: ‘Nature is never too sacred for Bonnard to rearrange, but ever a source-book for this playboy of pictorial design….It is tempting also to see in Bonnard an affinity to the magical Debussy. These two masters of nuance are corresponding links between the old and the new in music and painting’[5].

Laughlin Phillips, the son of Duncan and Marjorie (who was herself an artist), took over the directorship of The Phillips Collection in 1979, after a career with the CIA and ownership of the Washingtonian magazine. Bonnard’s Matin bleu descended in his family. 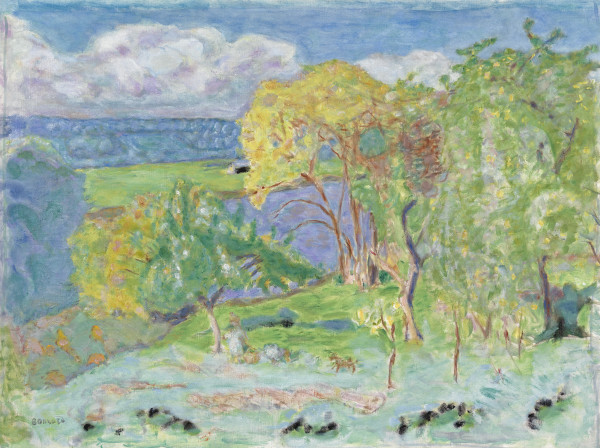 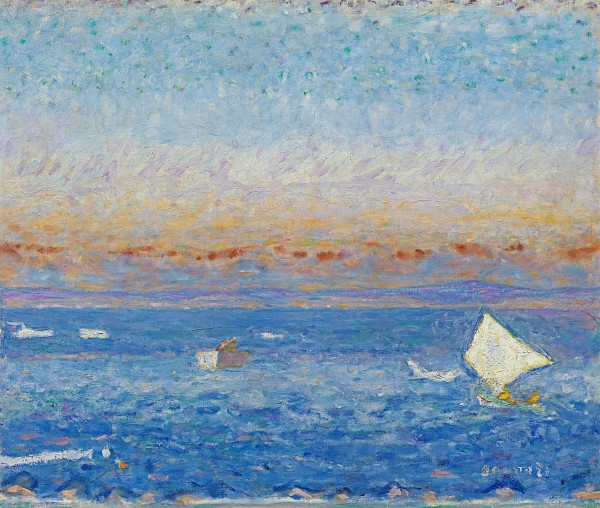 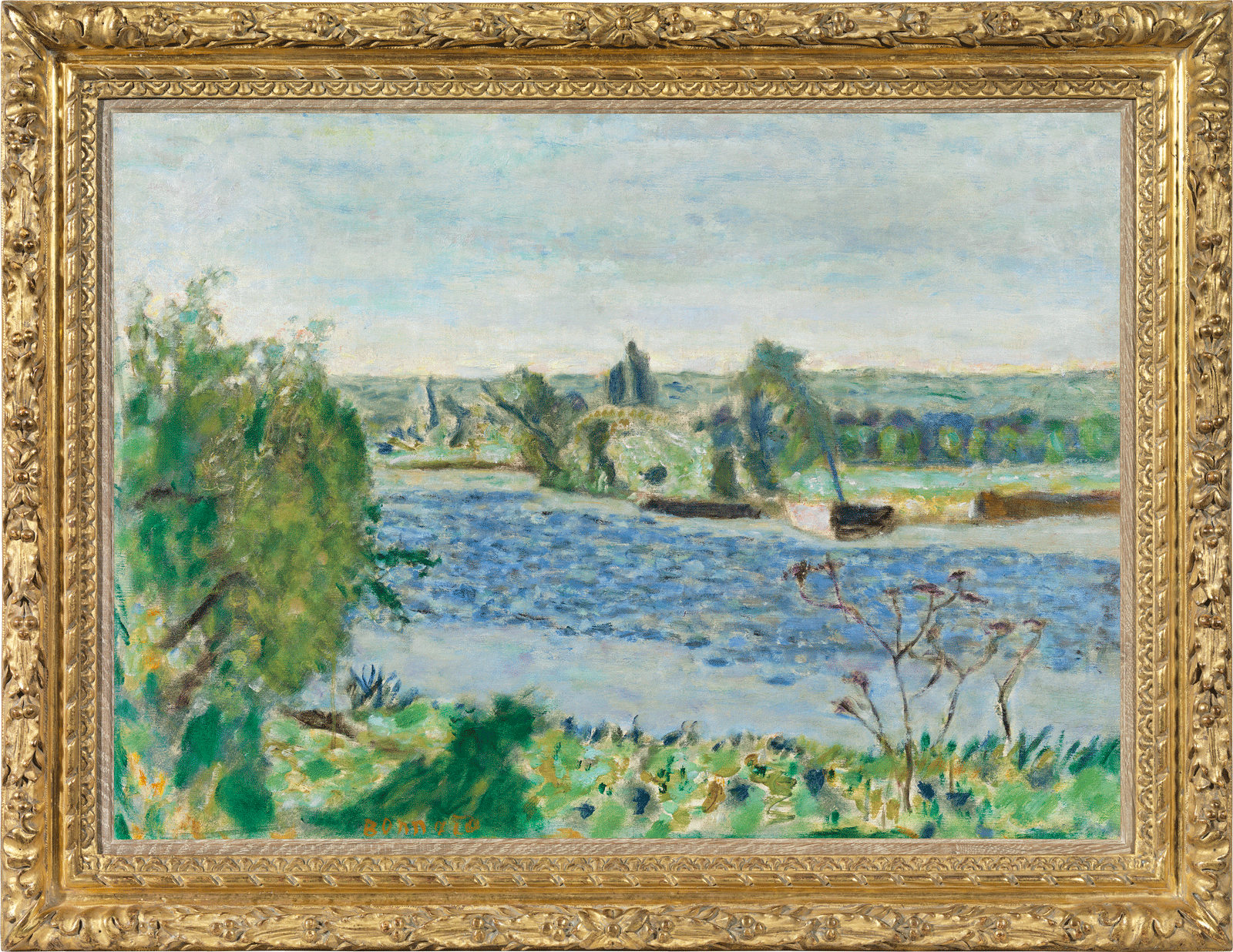