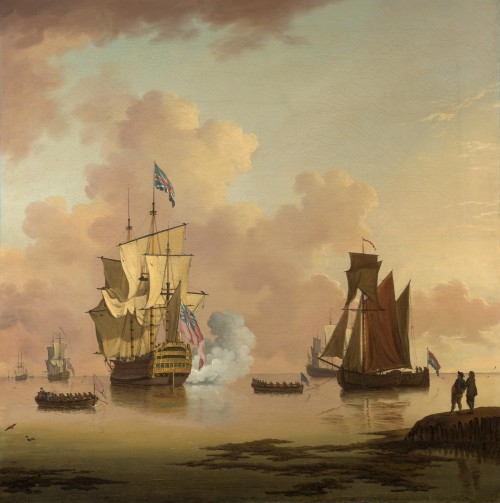 Like his father-in-law Peter Monamy (1681-1749), Francis Swaine was influenced by the work of Willem van de Velde the Younger (1633-1707), who came to England with his father in 1672 and who was given a studio at Greenwich by Charles II. This painting emulates one of Willem’s famous ‘calms’, even down to its square format, which suggests that it was intended to be an overdoor.

The beautifully balanced composition is constructed around a triangle which runs from top left to bottom right. The focus of the painting is a handsome British three-decker man of war which fires a salute into the calm air, the billowing white powder smoke echoing the pink-tinged clouds which frame the ship. Seen slightly to port, she displays a magnificent carved and gilt stern typical of ship design of the mid-eighteenth century: the ‘gingerbread work’ which, when damaged in battle, gave rise to the expression ‘taking the gilt off the gingerbread’. The three-decker wears a red ensign, the senior colour, and a Union at the main, suggesting that this is the flagship of the Admiral of the Fleet. At the left, a barge pulls for the starboard side of the flagship, transporting naval officers and VIPs. At the centre of the painting, a second barge pulls for the shore, passing a moored Dutch galliot, a small trading vessel. Her rusty sails, silhouetted against the morning light, form a contrast with the towering sail plan of the warship whose limp sails are creamy in the pale sunshine. In the distance are other warships of the fleet, hazy on the horizon as if suspended between sea and sky.

Swaine creates a scene of calm grandeur which evokes the beauty and power of the British fleet. The flagship towers over and seems to protect the humble trading vessel, a reminder of the debt which the British, and indeed other economies, owed to the Royal Navy. When Swaine signed this painting in 1765, the Seven Years’ War, which exacerbated the age-old rivalry between England and France, had only just ended. Ironically, Britain was not well prepared for a naval war with France at the beginning of the Seven Years’ War, with government’s usual stinginess about shipbuilding in peacetime. Victory, Nelson’s flagship at Trafalgar, was launched in 1765, the year that this painting was made, as part of a programme to bring the fleet up to strength.

This painting hung at Shrubland Park in Suffolk, descending in a distinguished naval family which numbers among its members Admiral James Saumarez (1757-1836), one of Nelson’s Band of Brothers at the Nile in 1798, and Rear-Admiral Sir Philip Broke (1776-1841), hero of the 1813 action between the Shannon and the Chesapeake. Shrubland was built in 1770-72 by James Paine for the Rev. John Bacon and after 1798 extended in Italianate style by Sir William Middleton, 1st Bt. (1747-1830) of Crowfield Hall near Coddenham, whose wealth came from trade and land in Barbados and South Carolina. He married Harriot Acton of Livermere Hall near Bury St Edmunds, Suffolk, and inherited the fortune and collections of his childless brother-in-law, Nathaniel Lee Acton (1756-1836). Middleton’s son Sir William Fowle Middleton, 2nd Bt. (d.1860) commissioned Sir Charles Barry, architect of the Palace of Westminster, to transform Shrubland into an Italianate palazzo, filled with Italian paintings collected on Sir William’s trips to Europe and surrounded by an elaborate, terraced Italianate garden. Shrubland, along with Queen Victoria’s Osborne House on the Isle of Wight, is one of the finest surviving examples of the nineteenth-century English love affair with the Italianate style.

Sir William’s heir was his nephew Sir Nathaniel Broke, 3rd Bt. (1812-1887), who took the additional name of Middleton. He was the son of Rear-Admiral Sir Philip Broke, of Broke Hall, Nacton near Ipswich, whose fifteen-minute duel commanding the Shannon against the heavier US frigate Chesapeake off Boston on 1st June 1813 restored the honour of the Royal Navy, somewhat dented by US victories (such as the capture of the Java by the Constitution) in the War of 1812. The gallantry of Captain Lawrence of the Chesapeake in coming out of harbour to meet Broke’s challenge, and his death after a hard-fought action, while Broke was seriously wounded, has meant that the actions of both sides are held in high esteem. Sir Nathaniel Broke-Middleton, who served in the Royal Navy in the Crimea, brought to Shrubland many possessions of his father and added a further collection of Italian paintings. On his death in 1887 the house passed to his niece Jane Ann Broke, wife of James, 4th Baron de Saumarez (1843-1937), grandson of Admiral James Saumarez, 1st Baron de Saumarez, who fought at the Nile.

Although it is not possible to say from which of these complicated inheritances this painting by Francis Swaine entered the Shrubland collection, it is satisfying to think that it has belonged for nearly two and a half centuries to a family which played such a large part in Britain’s naval history.

Francis Swaine painted general shipping scenes and naval actions. Nothing is known about his training; he is first recorded in 1735 as a messenger on a list of clerks and officers working for the Treasurer and Commissioners of His Majesty’s Navy.

Swaine was a contemporary of Charles Brooking (1723-1759), some of whose paintings he copied, and he was also influenced by Peter Monamy (1681-1749). On 29th June 1749, five months after Monamy’s death, Swaine married Monamy’s daughter Mary. Their second son Monamy Swaine (born circa 1751) also became a marine painter. Swaine exhibited at the Free Society from 1761-1782 and at the Society of Artists from 1762-1782; his work was also exhibited posthumously at both institutions, in 1783.

The work of Francis Swaine is represented in the National Maritime Museum, Greenwich; the Victoria and Albert Museum, London; the Witt Collection, Courtauld Institute of Art, London and the Glasgow City Art Gallery. 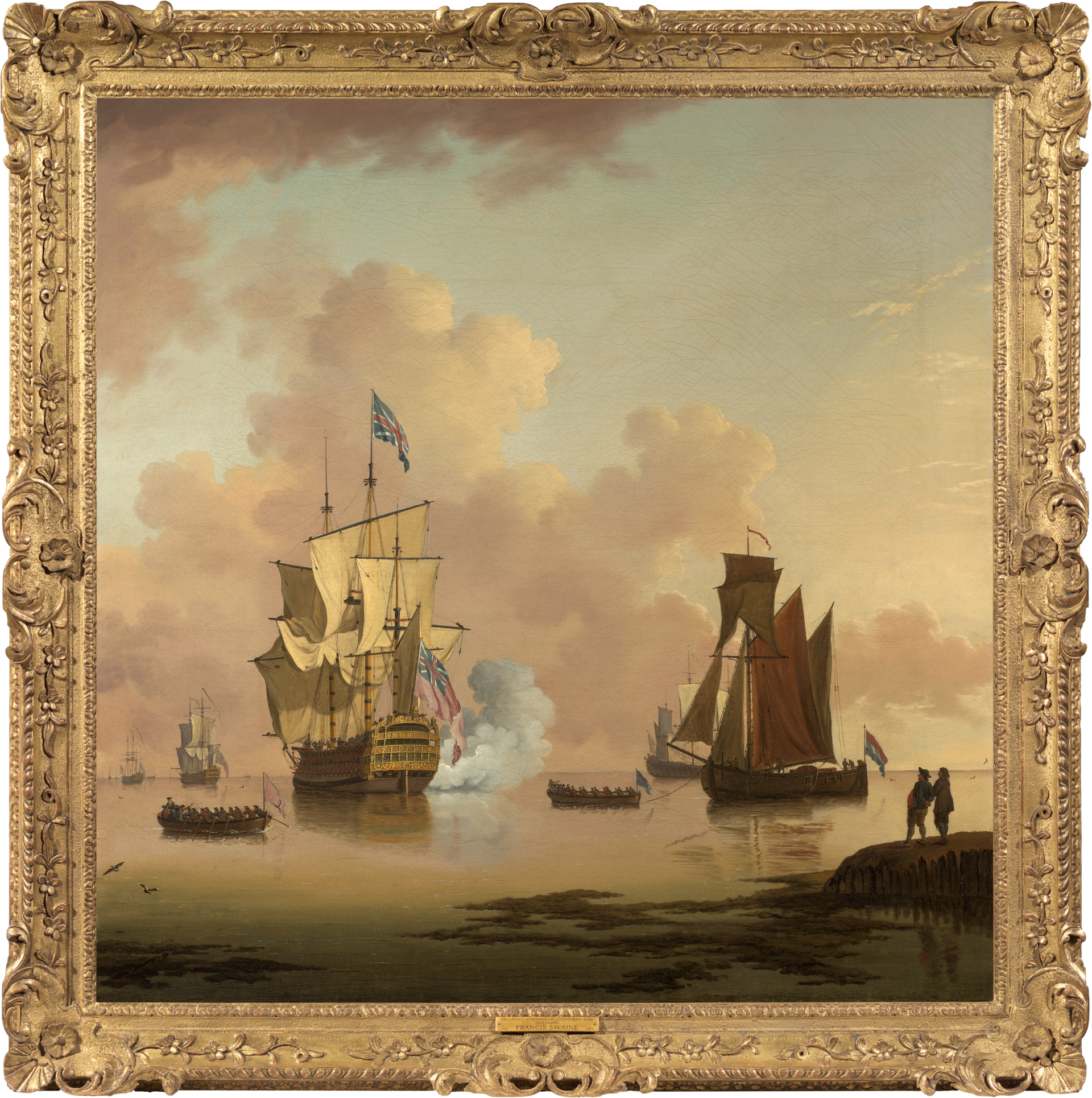