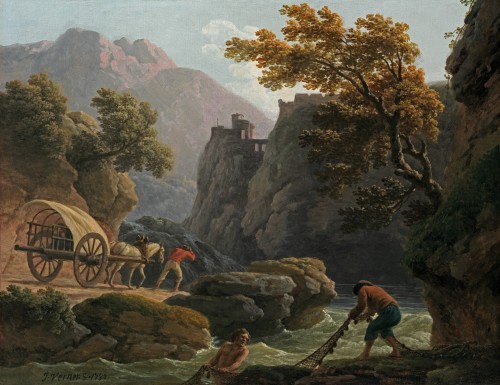 Claude-Joseph Vernet was born in Avignon in the South of France and spent almost twenty years in Italy, from 1734 to 1753, before returning to his homeland. His idealised views, which found favour with Louis XV and an international clientele, are informed by his intense observation of Mediterranean architecture, nature and light.

Vernet’s Alpine views, such as the present painting, are much rarer than his Mediterranean scenes. In 1778 he spent six weeks in the Swiss Alps with his son Carle (1758-1836), the future battle painter, at the invitation of his patron Jean Girardot de Marigny. Girardot de Marigny was a Parisian banker of Swiss descent, who formed an important collection of contemporary French paintings.

A pair of fishermen struggles to cast a net in an ice-cold, fast-flowing mountain stream. On the narrow, rocky track, a man with a cart leads his horse, braced against the wind. The painting is filled with the energy of the high, unforgiving terrain: the flecks of foam on the turbulent stream, the right-hand tree bowed in the direction of the prevailing wind, the cart’s canvas straining in the breeze. In the distance, a castle guards a lonely promontory and the Alps rise higher and higher, tops warmed by an unseen sun.

Vernet was celebrated for his depictions of nature in its most awe-inspiring moods, for example in his many paintings of storms and shipwrecks. As the eighteenth century progressed, writers and artists became increasingly fascinated by Alpine scenery. Most Grand Tourists took the route over the Alps to reach Italy, in carriages clinging to narrow ledges, battling hail and snow. What seemed terrifying at the time, could be experienced as sublime when recollected in the tranquillity of a drawing room, contemplating an Alpine painting.

Vernet’s Mountainous river landscape, with its crisp handling and powerful chiaroscuro, vividly reflects the experience of his Swiss journey. He was also influenced by Salvator Rosa (1615-1673) and by the dramatic Alpine landscapes of the Swiss artist Caspar Wolf (1735-1798), five of whose gouaches he acquired in 1780. This painting can be compared to Vernet’s Cascades, another view of a rushing mountain torrent, known from an engraving by Rhein[1].

Mountainous river landscape comes from the collection of Thomas Rusche, fourth-generation textile merchant and Managing Director of the luxury clothing label SØR Rusche. Mr Rusche collected over a thousand works, beginning with cabinet-sized Old Masters and later adding contemporary art. They were displayed in his houses in Oelde, Münsterland and Berlin Charlottenburg. Selections from the collection have been extensively loaned to German and international museums.

Claude-Joseph Vernet was one of the most eminent and influential French landscape painters of the eighteenth century. Born at Avignon, son of the painter Antoine Vernet, Claude-Joseph showed great talent at an early age. Patronised by the Marquise de Simiane, the Marquis de Caumont and the Comte de Quinson, he went to Italy in 1734. In Rome, Vernet probably worked initially in the studio of the French marine painter Adrien Manglard. By 1738 he had established a reputation as a painter of landscapes, seaports and coast scenes, reminiscent of seventeenth century masters such as Gaspard Dughet. In 1745 he married Virginia Cecilia Parker, daughter of Mark Parker, an Irish Captain in the Papal Navy.

Vernet was particularly concerned with rendering the transience of nature and the effects of light and weather. His paintings won critical acclaim for his ability to capture the changing beauties of nature. His subtle interest in the variety of landscape is seen in the way he conceived works in pairs and sets, contrasting times of day, weather, sea and shore scenes.

Vernet became a member of the Académie Royale and returned to France in 1753. That year he was commissioned by Louis XV to paint his famous series of the Ports of France, a celebration of the country’s principal seaports, in which he combined the exacting demands of topography with a poetic monumentality. Vernet completed only fifteen of the proposed twenty or more ports, exhibited at the Salon between 1755 and 1765. However, both in scale and quantity, this was one of the greatest official commissions of the century. Vernet finally settled in Paris in 1765, working for a large international clientele. He travelled to Switzerland with his patron Jean Girardot de Marigny in 1778, and died in Paris on the brink of the Revolution in 1789.

The work of Claude-Joseph Vernet is represented in the Musée du Louvre, Paris; the Château de Versailles; the National Gallery, London; the Hermitage, St Petersburg; the Prado, Madrid and the Philadelphia Museum of Art.