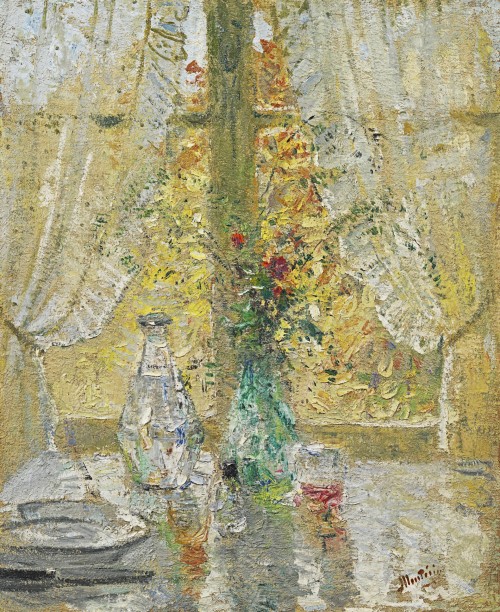 inscribed on the stretcher: Montézin Dreux

The authenticity of this work has been confirmed by Cyril Klein-Montézin, grandson of the artist

Pierre-Eugène Montézin followed in the tradition of Impressionism and had a distinguished career as a plein-air landscape painter. In 1932 he gained the Medal of Honour at the Salon des Artistes Français, the first landscape practitioner to do so for more than three decades. He was also a very fine painter of still life, capturing the vibration of light with dancing, delicate brushstrokes. Light almost dissolves the solid elements in this composition: the glass carafe is deconstructed into richly-impasted dabs of white, blue and yellow; the glass of wine loses its sharp edges, bathed in radiance. The central bouquet is an informal gathering of cottage-garden flowers with arching sprays of trembling leaves. Everything shimmers with transparency, from the voile curtains to the windows giving a hazy glimpse of the garden beyond.

The exploration of light in quiet, domestic still lifes was characteristic of other Post-Impressionist painters in the first half of the twentieth century, notably Pierre Bonnard (1867-1947) and Henri Le Sidaner (1862-1939), who also enjoyed placing still life objects in front of a window, playing with effects of interior and exterior light. Although by then in his forties, Montézin enlisted and fought with distinction in the First World War. Upon his return from the front in 1919, Montézin settled for a year in the peaceful surroundings of Dreux, near Chartres, overjoyed to return to his painting. He returned to Dreux on many later occasions. Montézin Dreux is inscribed on the stretcher of Nature morte à la fenêtre, placing the scene in the picturesque city on the Eure. Cyril Klein-Montézin dates this painting circa 1940-46.

Pierre-Eugène Montézin was born in Paris in 1874, the son of a lace designer. He gained his lifelong love of nature from fishing and shooting trips to the countryside with his father. He was introduced to the arts at a young age and entered an atelier to learn mural painting. From 1893 he sent works to the Paris Salon, but had none accepted for a decade. Around 1903 Montézin gained a mentor in the landscape and flower painter Ernest Quost (1844-1931), who encouraged him to concentrate on drawing and painting and to study the theories of Impressionism. Montézin painted landscapes and rural scenes, always working en plein air with graceful, allusive brushwork. He also executed still lifes and portraits.

Montézin was awarded Salon medals in 1907 and 1910. He enlisted in the First World War and was awarded the Médaille Militaire for his part in the battles of the Meuse. After the War he spent a year painting at Dreux near Chartres and at Moret-sur-Loing, the former home of Alfred Sisley, whose work, along with Monet’s, he greatly revered. In 1920 he was awarded the Salon’s Prix Rosa Bonheur and three years later was made a Chevalier of the Légion d’honneur. Montézin, his wife and daughter divided their time between Neuilly-sur-Seine and their house at Veneux-les-Sablons in the Ile de France, which Montézin decorated with a mural.

In 1932 Montézin gained the Medal of Honour at the Salon des Artistes Français, the first landscape painter to do so for more than three decades. He was elected President of the Salon the following year and had a highly successful exhibition at Galerie Charpentier. At a major exhibition at Durand-Ruel in 1938, the critic Louis Vauxcelles commented of Montézin’s work that ‘Each touch, each vibration weighs as a truth’. The following year Montézin executed a large mural for the Palais de Justice in Chambéry, south-eastern France, titled Les travaux des champs – la Justice et le Droit (in situ). He was elected to the Académie des Beaux-Arts in 1941 in place of Edouard Vuillard, who had died in 1940. Montézin retained his enthusiasm for plein-air landscape into his seventh decade, dying in 1946 while on a painting trip to Moëlan-sur-Mer in Brittany.

Other Works By
Pierre Eugene Montezin: 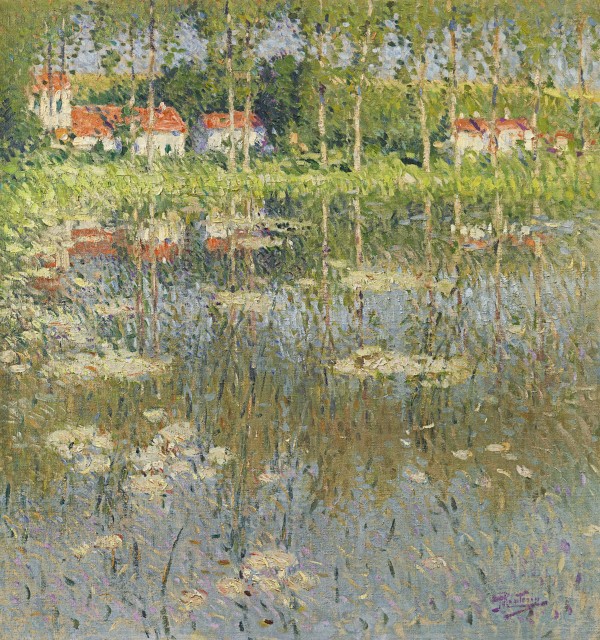