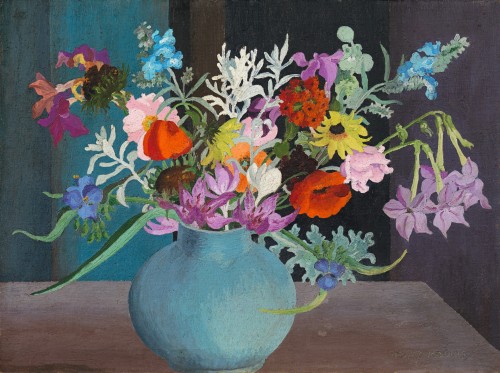 titled on the canvas overlap

In its original restored frame

from whom bought by Clement Butson, Esq.

from whom bought circa 1968 by a private collector, New Zealand

In this painting Cedric Morris uses startlingly original colour juxtapositions to produce a work of great impact, at once naturalistic and stylized. The purple of the nicotiana, scabious and autumn crocus clashes against the vivid scarlet of the poppies and Maltese cross. Interwoven are the cool silver, blue and blue-green hues of the lamb’s tongue, spiderwort and yellow-horned poppy. The subtle blue of the globular vase is echoed in the vertical panel of blue in the background, which balances the purple-brown horizontal of the table top. Morris plays with the ambiguities of space behind the bouquet, the greys and blacks of the right-hand background push the flowers in front of it into intense silhouette, while the blooms sink gently against the soft blue panel on the left, turning deeper into space. The effect is to give this far-from-still life a brilliant dynamism, acknowledged in Morris’s title, Nicotiana in contrast.

This is a late summer bouquet, as nicotiana, Japanese anemones, sunflowers and autumn crocuses all appear in July or August. The yellow-horned poppy can be found growing in shingle along the Suffolk coast. The Maltese cross, so called from the shape of its flowers, is a garden flower introduced from Russia. Caryopteris and Japanese anemone are native to China and Japan, while the tradescantia, sunflowers and nicotiana are of American origin.

Already disillusioned with the wiles of London dealers, Morris nevertheless went ahead with an exhibition of portraits at Guggenheim Jeune Gallery in 1938. A guest so objected to his work that he began to burn the catalogues and Morris hit him: ‘the walls of the gallery were spattered with blood’[1]. Thereafter Morris abandoned the London art scene. The previous year he and Lett had set up the East Anglian School of Painting and Drawing in Dedham. When the building caught fire in 1940 (gleefully applauded by Sir Alfred Munnings, who hated modern art) the school, as well as Cedric and Lett’s home, moved to Benton End, Hadleigh, Suffolk, where another marvellous garden was created. Students were given creative freedom as well as a solid grounding in technique (not to mention the benefits of Lett’s superb cooking). Alumni include Lucian Freud (who imbibed Morris’s method of painting directly on to canvas, without underdrawing) and Maggi Hambling. Failing sight caused Cedric Morris to give up painting in 1975, but he was still gardening at the age of ninety-one in 1981; he died in Ipswich the following year.