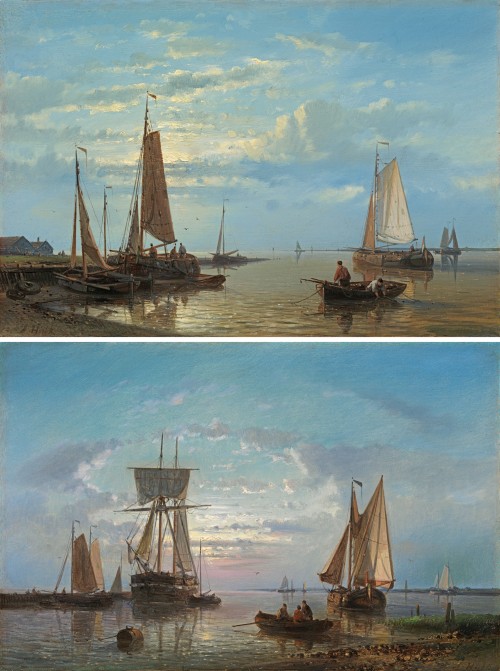 On the Scheldt, low tide

On the Scheldt, sunset

Abraham Hulk Snr stands in the great tradition of Dutch sea painting. The high degree of finish in his work, understanding of light and subtle response to changing weather derives from masters such as Salomon van Ruysdael (1600/3-1670) and Willem van de Velde the Younger (1633-1707) and parallels that of his contemporaries like as Johannes Hermanus Koekkoek (1778-1851). Hulk grew up in the great port of Amsterdam and spent an adventurous period in America from 1833 to 1835, initially supporting himself as a ship’s painter – of real ships, not yet as an artist portraying ships[1].

Returning to Amsterdam, Hulk abandoned his specialization in portraiture in favour of marine painting, which brought him prosperity, especially when he moved to England in 1875. A keen sailor, who made many expeditions on the Zuiderzee, he thoroughly understood marine life and the intricacies of sailing ships. Shore scenes like the present pair are a favourite theme, one also favoured by van de Velde. In each work, the sky fills two-thirds of the composition, intricately fretted with clouds to give a sense of energy. On the Scheldt, low tide is filled with golden morning light. In its pair, On the Scheldt, sunset, the pale orange and pink of the declining sun, hidden behind clouds, flushes the bay and the sails of the fishing boats with its warmth. Both paintings exhibit the pervasive sense of tranquillity and tonal harmony for which the artist was renowned. Hulk turns everyday views of the maritime life that was so crucial to the Dutch economy into scenes of romantic reverie.

Hulk moved to London in 1875 and found success in a burgeoning industrial nation with a taste for Dutch marine painting, both Old Master and modern. He frequently produced pairs of paintings, often comparatively small in format and on panel, in homage to the cabinet paintings of the seventeenth century Netherlandish masters. Panel also afforded him the high degree of finish that he wished to achieve in his oils. This pair bears the labels of the prestigious art suppliers Winsor & Newton, indicating that it was executed in London.

Abraham Hulk Senior specialized in marine subjects and Dutch estuary scenes, inspired by the turbulence and calm of the coastal waters and estuaries of The Netherlands. He showed a particular talent for capturing the atmosphere and varied effects of calms and storms. Abraham was the senior and most important member of the Hulk family of artists which also included his brother John Frederick, an animal painter, and his son Abraham Junior, a landscapist.

Born in London in 1813, Hulk studied at the Amsterdam Academy under portraitist Jean-Augustin Daiwaille. Between 1833-1834, he undertook a long voyage during which he visited North America and then returned to Holland for many years where he lived in Amsterdam, Nijkerk, Enkhuizen, Haarlem and Oosterbeek. During this period, Hulk regularly exhibited in Holland. In 1870, he returned to London where he remained for the rest of his life and exhibited at the Royal Academy in 1876 and 1890.

The work of Abraham Hulk Snr is represented in several museums including the Amsterdam Historical Museum, the Zuiderzeemuseum, Enkhuizen and the Teylers Museum, Haarlem.

[1] For a detailed biography of Hulk and his time in America, see Matthew Honan, ‘De kunst van Abraham Hulk en zijn dagboek naar America’ (The art of Abraham Hulk and his travel diary to America), Scheepshistorie, Issue 26, November 2019, pp.92-109. We are grateful to Dr Honan for details of Hulk’s life and for providing a translation of the article. 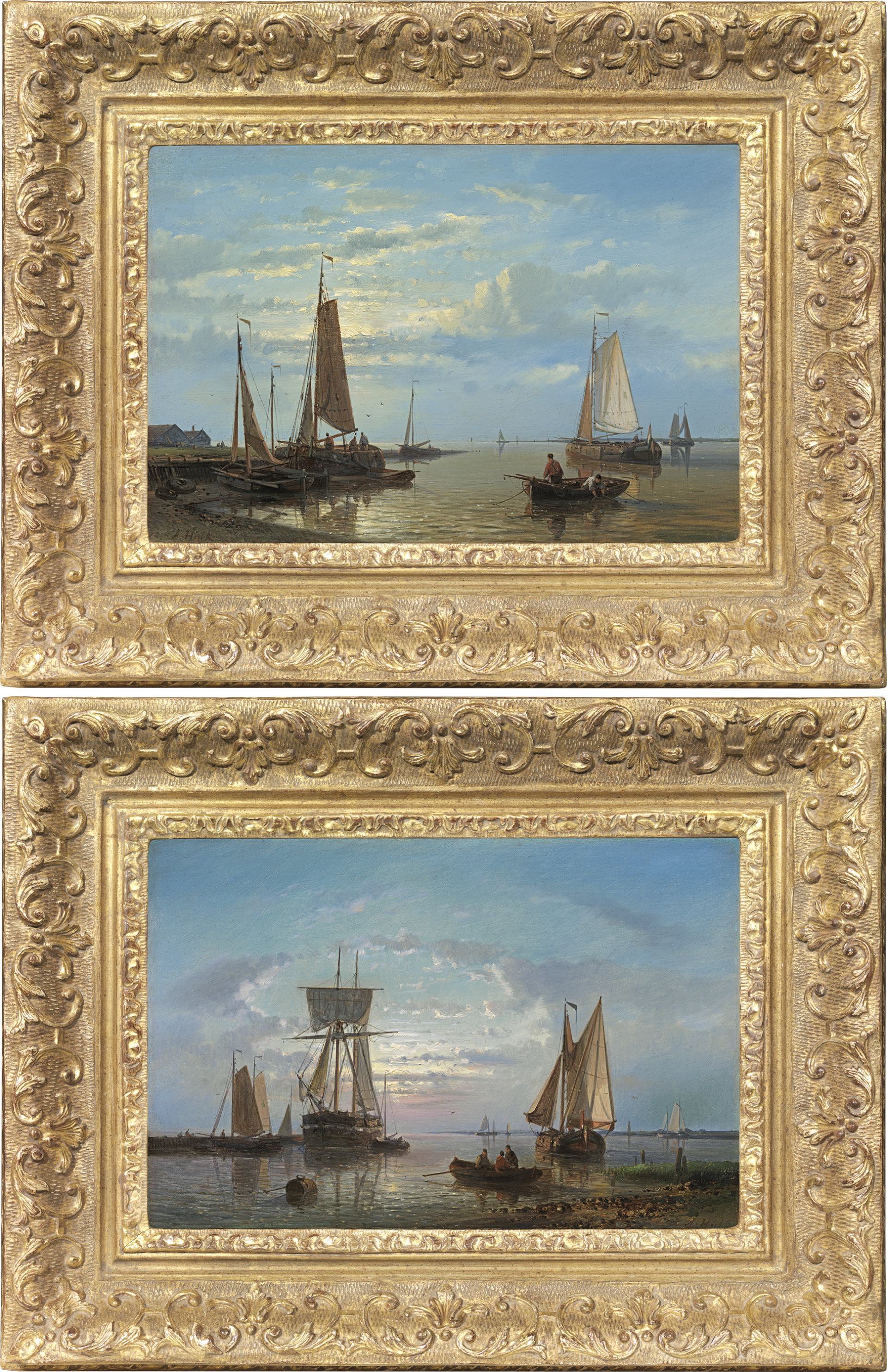