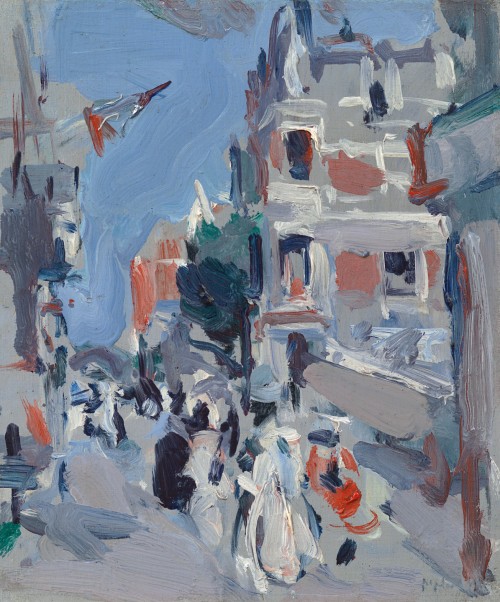 In an antique Louis XIII carved and gilded frame

Described as a ‘Franco-Scottish Painter’,[1] Peploe had a lasting love of France. He studied in Paris, stayed for extended working holidays and lived in the capital for two years, during which he observed and completely engaged with modern French painting from Manet to Matisse. Peploe met John Duncan Fergusson (1874-1961) around 1900 and from 1904 to 1910 they spent their summers painting together on the northern coast of France. Staying at Etaples, the artists visited Paris Plage (now known as Le Touquet) on the Cote d’Opale, a popular seaside resort and artists’ colony, previously frequented by Eugène Boudin (1824-1898).

A remarkable study in red, white and blue against the grey ground of the built environment, Peploe describes the bright, fresh vitality of the bracing sunlit street with swift assurance. Strokes of vivid red on the far right define the cropped edge of a building, while another in the foreground conveys the rustle of a dress, its saturated hue leading the eye, via the fluttering Tricolor, into the distance in an accomplished display of compositional structure and perspectival recession. Bustling with active figures deftly defined with richly impasted dashes of paint, this intimate, intuitive townscape fluently articulates the energy and immediacy of plein air painting.

In his biography on the artist, Stanley Cursiter wrote of this period in Peploe’s career: ‘In the years immediately before 1910 Peploe had spent some time each summer sketching in France, at Étaples and Paris-Plage with his friend J.D. Fergusson. He painted a number of small panels with subjects supplied by the beaches: groups of figures, bathing tents, striped umbrellas, and the sea with green waves dancing over the pale sand. These pictures grew naturally out of the light schemes of colour on which he had been concentrating… The colour is not the foundation of his schemes, but incidental and added to a structure which exists in tone. In the small panels painted at Paris-Plage and Étaples colour is used more in the manner of the Impressionists; the picture exists in colour; the colour is no longer something added to a scheme of tonal relations, but the tonal relations are the outcome of the colours selected.’[2]

It is thought that Peploe and Fergusson met at a studio club run by Joseph Simpson in Edinburgh around 1900, both having studied in Edinburgh and Paris.[3] Fergusson would later describe their relationship as: ‘A happy unbroken friendship between two painters who both believed that painting was not just a craft or profession, but a sustained attempt at finding a means of expressing reactions to life in the form demanded by each new experience’.[4]