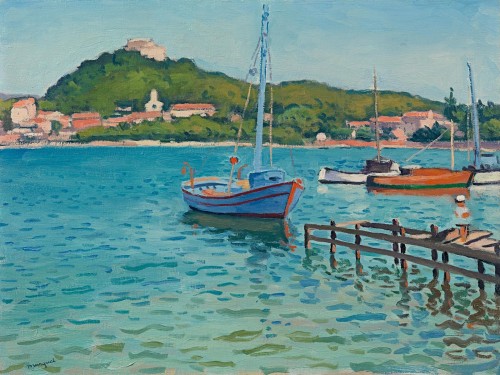 titled and dated on the stretcher: Après midi d’été /1939

This painting was authenticated in 1982 by FC Martinet, Albert Marquet’s nephew

To be included in the forthcoming Digital Catalogue Raisonné of the work of Albert Marquet currently being prepared by the Wildenstein Plattner Institute, Inc., ref. 19.12.12/20644

Albert Marquet lived on the banks of the Seine most of his life and became celebrated for his sensitive observation of Paris and its river. Fascinated by water, ports and coastline, he was also an inveterate traveller, visiting England, the USSR and North Africa, among other places, as well as exploring his native France.

As a young man in the studio of Gustave Moreau, Marquet forged friendships with Camoin, Rouault, Manguin and Matisse. They burst upon the Salon d’Automne in 1905 with vibrant colours and bold brushwork, leading a critic to dub them ‘Fauves’ (Wild Beasts). Marquet was closely associated with this group in the early years of the twentieth century and its legacy can be seen in this view of Porquerolles, painted in 1939.

Marquet evokes the colour-saturated Mediterranean landscape on a hot afternoon in that last summer of European peace. The hues he chooses are never obvious or banal, but form a unique signature. The sea is a pristine aquamarine, given context and pictorial depth by the even-more-vivid blue of the central boat. Marquet ‘draws’ with economy in paint, suggesting the shape of the boat, its mast and rigging with a minimum of bold strokes, contrasting the blue with a few lines of lipstick-red. The composition is underpinned by a geometric precision, a balance of horizontal and vertical lines, shoreline and jetty against masts and church tower. As with most of Marquet’s paintings, humanity is implied but largely absent. The only person here is a small child, gazing upon the water from the jetty.

Porquerolles is one of the Provençal Iles d’Hyères, situated south-east of Toulon. Marquet’s painting shows the village of Porquerolles, with the church and wooded slopes crowned by the Fort Saint Agathe. The village was built around 1820 for the families of the military stationed there; situated at the approach to Toulon, one of France’s most important naval bases, the island had strategic significance. The pale yellow stone of the Fort Saint Agathe, reflects the afternoon sun. Sixteenth century in origin, it was renovated under Cardinal Richelieu, Napoleon III and the Third Republic. 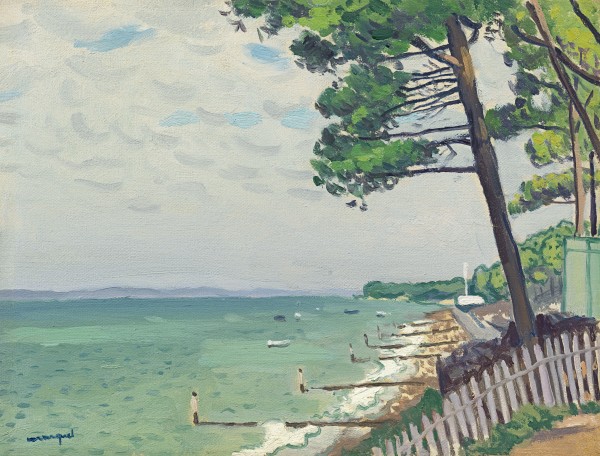