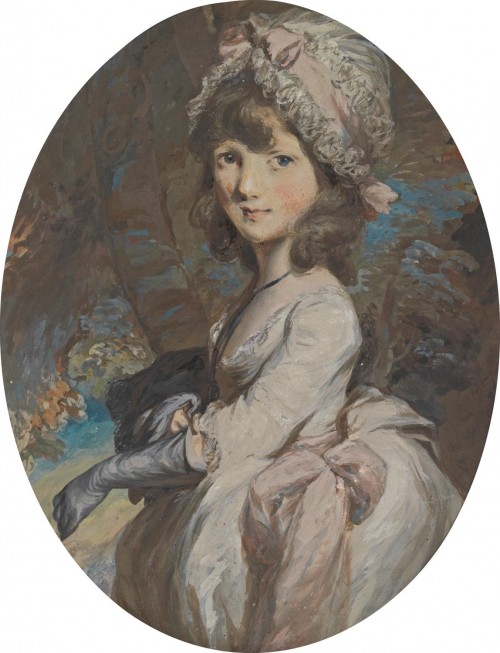 By descent in the family of the sitter

Daniel Gardner was taught to draw by his mother’s friend George Romney and is said to have worked in the studio of Sir Joshua Reynolds. He eschewed Reynolds’s ‘Grand Manner’ in favour of small-scale portraits, often in pastel, which have the charm and informality reflected here. Gardner’s bravura use of pastel enhances Caroline Rumbold’s air of youthful freshness and glowing complexion. Wearing a white dress and a pale pink sash, she stands before a tree whose leaves shimmer in the breeze. Embowered in the landscape, the young girl invokes the late eighteenth century cult of sensibility, with its emphasis on communion with the natural world.

Caroline was the second daughter of the diplomat Sir George Berriman Rumbold, 2nd Bt. (1764-1807) and his wife Caroline, née Hearn. Her grandfather was Sir Thomas Rumbold, 1st Bt. (1736-1791), Governor of Madras. Sir George, despite his diplomatic immunity, was captured by the French in 1804 while serving in Hamburg as Ambassador to the Hansa towns. Returned to London on Napoleon’s orders, he died in 1807 at Memel, Germany (today in Lithuania).

In 1810 Lady Rumbold remarried, to her husband’s erstwhile colleague Vice-Admiral Sir Sidney Smith (1764-1840). He was one of the most dashing naval officers (and spies) of the American Revolutionary and Napoleonic era, whose exploits outrun those even of the fictional Hornblower or Jack Aubrey. Smith fought at the Battle of the Saintes (1782) and spent two years as a French prisoner of war from 1796-98, before a daring escape. He played a crucial part in the Siege of Acre (1799), which helped to check Napoleon’s expansion eastwards. Smith and his family were in Brussels before the final showdown with Napoleon at Waterloo in 1815 and attended the Duchess of Richmond’s legendary ball, at which the cream of British society danced before the battle. In Byron’s famous words, ‘The lamps shone o’er fair women and brave men’[1] before the slaughter.

Sophisticated and cosmopolitan, Smith lived beyond his means and it seemed that his stepdaughters did likewise. Charles Macfarlane commented that Caroline and her sister ‘set no bounds to their flirtations, or to their extravagance’[2]. Smith had moved his family to Paris after Waterloo to avoid his creditors in England, so it is little surprise that in 1828 Caroline married a French aristocrat, Adolphe-Lazare Coturier de Saint-Clair (1786-1847), a Colonel in the Garde du Corps du Roi of the restored Bourbon monarch Charles X. Something of the elegance and spirit of the adult Caroline is presaged in Gardner’s portrait of her as a ten-year-old girl.

Daniel Gardner was a portrait painter whose style especially evokes the glamour and ‘sensibility’ of the 1770s and 80s. He invented a technique of combining oil, gouache and pastel on paper laid on canvas, which gives sparkle and texture to his small-scale full-lengths of high-society sitters.

Gardner was born in Kendal, Westmorland, the only son of a master baker. His mother was the daughter of Alderman Redman, a business associate of George Romney’s father. A keen amateur watercolourist, Mrs Gardner gave early encouragement to the career of George Romney, who in turn taught Daniel to draw. Gardner went to London in 1767 and in 1770 entered the Royal Academy Schools, where he studied with GB Cipriani, Benjamin West and Johan Zoffany. In 1773 he won a silver medal for the drawing of an academy figure and exhibited a Portrait of an old man at the RA, the only time that he ever exhibited there.

Gardner is said to have joined the studio of Joshua Reynolds as an assistant, to gain experience in oil painting. His oils are influenced by Reynolds, strongly impasted, sometimes somewhat ponderous. Gardner found his métier with small-scale full-length portraits and conversation pieces in his dazzling combination of oil, gouache and pastel, translating the glamorous theatricality of Reynolds’s Grand Manner into something more informal and playful. His compositions emphasize the bond between mother and child and the affection of siblings, a reflection of the late eighteenth century cult of ‘sensibility’. His paeans to family life reach their apogee in the elaborate oil, gouache and pastel Mrs Justinian Casamajor and eight of her children, 1779 (Yale Center for British Art, New Haven, CT). His sitters included the cream of Georgian society, among them the Duke of Buccleuch and the Duchess of Rutland.

Daniel Gardner was an eccentric who was observed by his patrons the Heathcotes wandering off into the woods to gather plants to use for experiments with pigments[3]. He refused to take pupils, would admit no visitors to his studio, and kept it firmly locked. Even sitters were not allowed to see their portraits before they were finished. In 1776 Gardner made a happy marriage to Anne Haward, sister of the engraver Francis Haward. Their son George was born in 1778, but Anne and her second son died in 1781. Gardner retained his links with Kendal, sending his son George to be educated there and amassing property and land in the town and its environs, which brought him a handsome income.

In 1802-3, during the Peace of Amiens, Gardner and his son took the opportunity (along with many other artists, including Thomas Girtin) to travel to Paris to see the Italian treasures looted by Napoleon. He sketched extensively in the Louvre and narrowly escaped being made a prisoner of war when hostilities resumed. Gardner’s combative personality did not make him popular among his fellow artists, but he formed a genuine friendship with the young John Constable, whom he introduced to Lakeland scenery, and of whom he made a beautiful portrait in 1796 (Victoria and Albert Museum, London). He also painted Constable’s father, the miller Golding Constable (Wolsey Art Gallery, Ipswich). Described by Joseph Farington as ‘extremely parsimonious’, Gardner left more than £10,000 at his death in 1805.

[2] Sydney Smith to Catherine Amelia Smith, 27th April 1826, in A Memoir of the Reverend Sydney Smith. By his Daughter, Lady Holland. With a Selection from his Letters, edited by Mrs Austin. 2 vols, Longman, London 1855. The wit and writer Rev. Sydney Smith was no relation of Vice-Admiral Sir Sidney Smith. 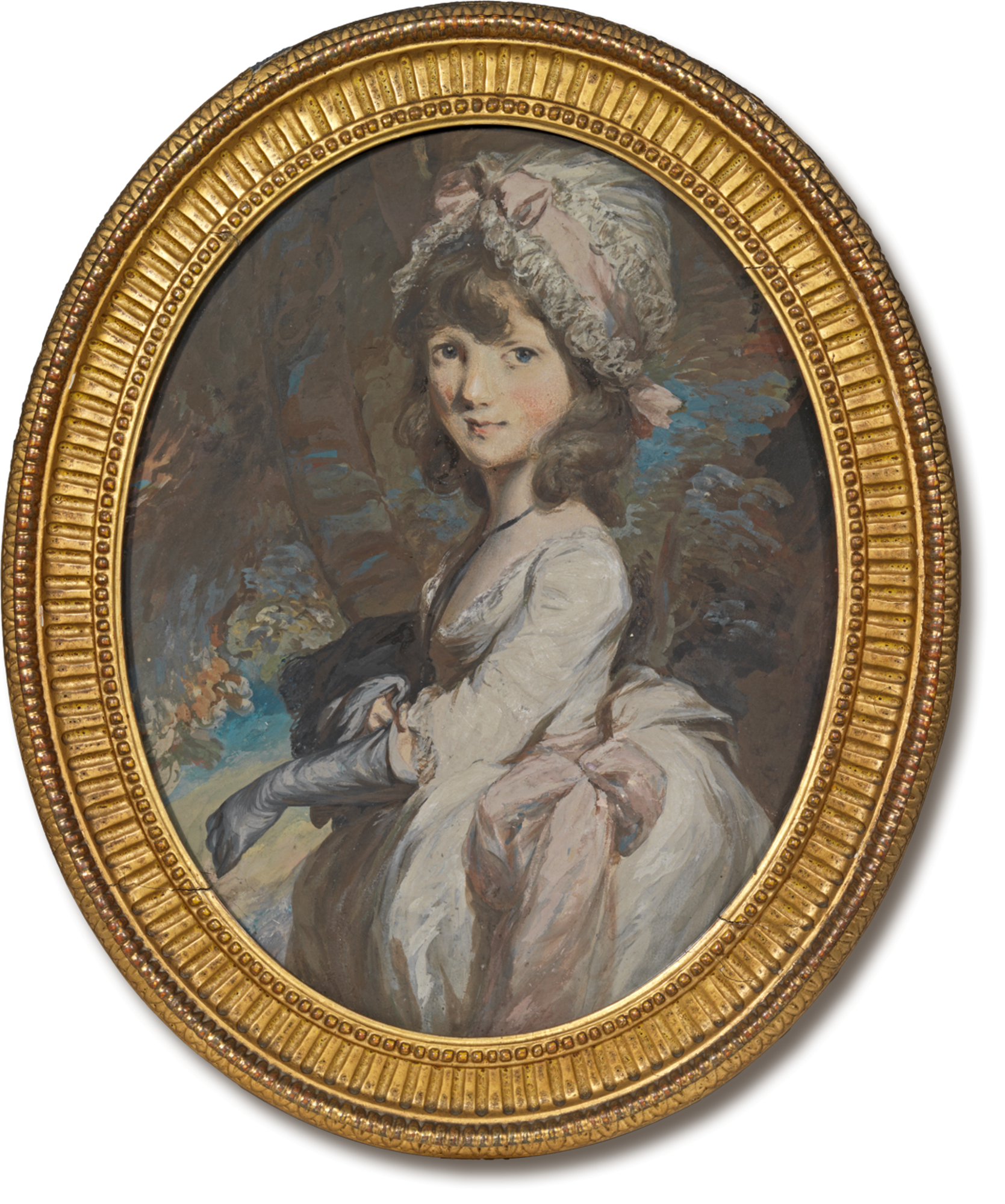