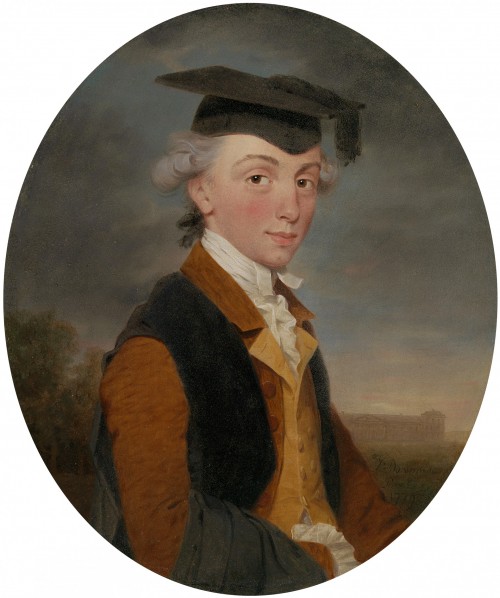 from whom acquired by a private collector, UK

John Downman is now best known for his small, oval portraits in black chalk and stump, drawn on very thin paper and tinted with watercolour on the reverse to give the effect of translucent skin tones. In the earlier part of his career, however, he often worked in oil on panel or copper. From 1777 to 1779 Downman lived in Cambridge, obtaining his portrait clientèle from among the academics and students. It was said that he initially set up his easel in college gardens to attract custom[1]. Cambridge students, usually from wealthy and well-connected families, provided many of the contacts from which sprang Downman’s flourishing London career, from 1779 to 1804.

The elegant young Charles Chadwick is shown outside the long façade of Emmanuel College, Cambridge. Chadwick was admitted to Emmanuel in 1771 and to the Middle Temple in 1775; he gained his LL.B in 1778. This oil on copper is based on a chalk drawing of 1778[2] in the Fitzwilliam Museum, Cambridge, perhaps commissioned to celebrate the awarding of Chadwick’s degree.

The Chadwick family had a long association with Emmanuel College. Charles Chadwicke, Chaplain to Elizabeth I and James I, was among its first dons at the college’s founding in 1585 and became Dean in 1587. The family had estates at Mavesyn Ridware in Staffordshire, Healey Hall near Rochdale and Sladen near Littleborough, Lancashire.

Charles Chadwick was the son of Colonel John Chadwick (1720-1800), who in 1774 replaced the Jacobean Healey Hall with a fine Georgian mansion. John Chadwick enjoyed scattering Healey and its buildings with inscriptions. Charles added one of his own, by a field used for training his racehorses and for foot races. A quote from Horace, Misce stultitiam consiliis brevem. Dulce est desipere in loco. (Mingle brief folly with your wisdom. It is sweet to play the fool at times), is appended: VI Oct MDCCLXXV Meus est Natalis. C.C. (6th October 1775 is my birthday. CC). Despite the delights of Healey, upon inheriting the Hall Charles Chadwick chose to let it, preferring to live at Mavesyn Ridware. In 1788 he married Frances Green, heiress of Richard Green Esq. of Leventhorp House, Co. York; they had one son, Hugo-Malveysin Chadwick. Charles Chadwick served as a Magistrate and Deputy Lieutenant for Lancashire and Staffordshire.

In 1804 Downman was living in West Malling, Kent, where he had relatives; he was a keen naturalist and made studies of animals and birds. By 1806 he had moved to Devon, where he married a daughter of the well-known Exeter organist and composer William Jackson, who had been a friend of Thomas Gainsborough. His later years were spent in constant travel to fulfil commissions, for example to Alnwick, Northumberland, to portray Hugh, Lord Percy, son of the Duke of Northumberland. In 1818, with the decline of demand for his work, he settled in Chester; he died at his daughter’s house in Wrexham in 1824.

Other Works By
John Downman: 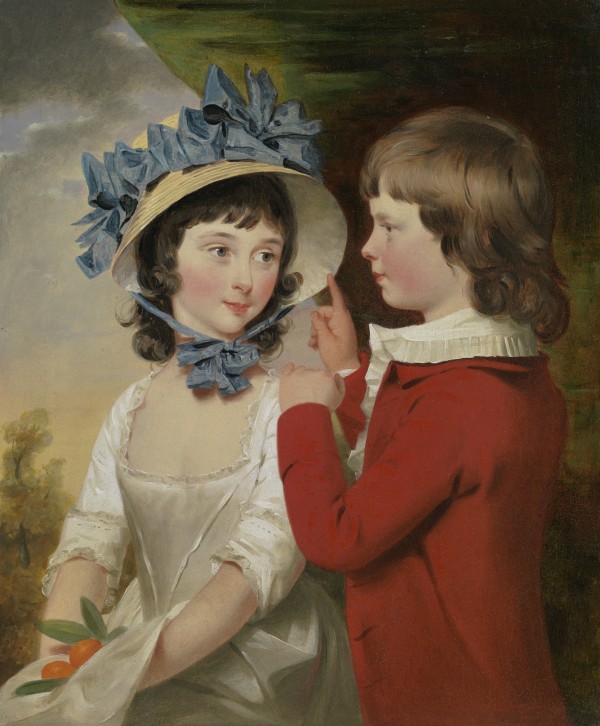