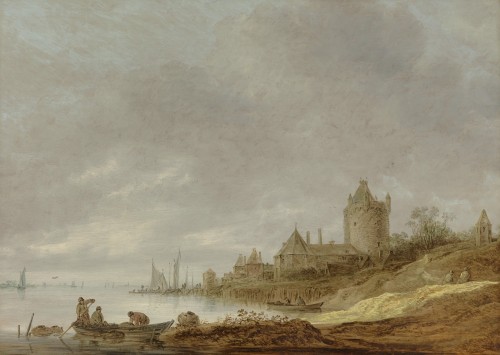 River landscape with a castle with a round tower

River landscape with a castle with a round tower

In the 1630s Jan van Goyen moved away from landscapes with strong local colours, influenced by Esaias van de Velde (1587-1630), towards a ‘tonal’ style which explores the nuances of nature through a limited, carefully harmonised palette. In the early 1640s he introduced compositions based on a subtle range of creamy yellow, gold, ochre, buff and warm greys, as in this River landscape of 1642. A similar palette is found in the work of Isack van Ostade (1621-1649) and Salomon van Ruysdael (1600/3-1670) at this period.

In this River landscape, a brilliant band of sunlight throws into relief the sandy bank in the foreground, leading the eye towards the ramshackle fortification. The sky occupies more than two-thirds of the painting, giving the composition its energy as clouds spiral over the village. To the left is a vast inland waterway, reminding us that there was less reclaimed land in the northern Netherlands in the mid-seventeenth century than there is today. The distant boats – by far the easiest and swiftest means of travel – are executed in grey-green with the most delicate of brush tip. One can make out a windmill and, across a huge and atmospheric expanse of water, a town with a substantial church tower.

Van Goyen, a restless man, travelled the length and breadth of the Netherlands, making black chalk sketches, the elements of which he combined in new compositions. His paintings are rarely unmediated topographical transcripts. His assurance as a draughtsman is reflected in his paintings. This is evident in the present work in the sinuous freedom with which he describes the misty line of boats and figures along the quayside in the middle distance, and in the figures of the foreground fishermen, conjured up from a few quick washes given definition by a squiggle of fine lines.

By 1642 the northern Netherlands had been fighting the Hapsburg south, on and off, for nearly eighty years. Fortifications were an essential feature of the landscape and a favourite motif of van Goyen. A similar pair of towers and shoreline are found in an upright painting by van Goyen, A castle by a river, 1647 (Ashmolean Museum, Oxford)[1]. Hans-Ulrich Beck suggested that the fortification in the present work may be based on the moated Culemborg Castle in Gelderland[2]. A 1647 drawing of Culemborg Castle by Roelant Roghman (National Gallery of Art, Washington DC) shows a similar arrangement of a square and round tower with a lower round tower in front.

This painting has been in several distinguished collections. It is first recorded in the collection of Jules Porgès (1839-1921), who made his fortune developing the South African diamond and gold mines. He founded the mining and financial group known as the Corner House with his employees Alfred Beit and Julius Wernher, who themselves became major art collectors. Porgès had largely retired from South African business by 1890 and built a chateau at Rochefort-en-Yvelines near Paris, as well as owning a house on the Avenue Montaigne, where he displayed his superb art collection.