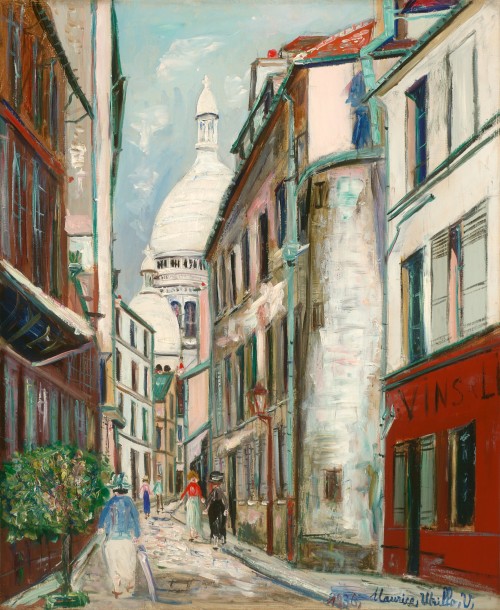 In an antique carved and gilded Louis XIV frame

from whom acquired by a private collection, New England

from which acquired by a private collection, Europe

Gilbert Pétridès confirmed the authenticity of this work in 2006, in photo certificate no.28 94

This painting will be included in Volume 1 of the L’Oeuvre Complet de Maurice Utrillo being compiled by Jean Fabris and Cédric Paillier, as no.5310

Maurice Utrillo was the painter par excellence of Montmartre, capturing the raffish, semi-rural air of this northern district of Paris, the magnet for so many artists in the nineteenth and early twentieth centuries. He grew up there with his mother, the former circus performer and artist’s model Suzanne Valadon (1865-1938), who forged her own career as a painter against many odds.

This painting shows the narrow, winding Rue Saint-Rustique with the dome of Sacré-Coeur in the distance. This great set-piece church, built between 1875 and 1914, had become the defining monument of Montmartre. Built to assert the spiritual renewal of France after the decadence of the Second Empire and the violence of the Commune (1870-71), Sacré-Coeur ironically can be seen both as a symbol of triumphant, Catholic conservatism and government control, and as a monument to the Socialist martyrs of the Commune. The insurrection had begun in Montmartre and many Communards were entombed in the gypsum mines beneath the hill when the Army detonated explosives to cut off their retreat.

Painted in 1936, this work belongs to Utrillo’s periode colorée, which began in 1922 and lasted until his death in 1955. The richly-impasted architecture is defined by lines of turquoise, blue and oxblood red, throwing into relief the white marble of the church and the stucco of the old houses. The curved structure at the right, perhaps a vestige of some medieval building, is a rich weave of white and coloured shadows as the sun plays on it.

Several women stride purposefully up the hill, wearing large picture hats and bell-shaped skirts. Just as Utrillo’s Montmartre is a landscape of the mind, so are these figures derived from the Montmartre of his youth, when the young Picasso invented a new type of painting in the squalid Bateau Lavoir and Suzanne Valadon modelled for Degas and Toulouse-Lautrec. Such is the power of Utrillo’s vision, it is impossible to look at Montmartre today without seeing it through the prism of his work.

Born in Paris in 1883, Maurice Utrillo was the son of the artist and model Suzanne Valadon (1865-1938) and the Spanish painter Miguel Utrillo (1862-1934). He was encouraged by his mother to take up painting as a distraction from his need for alcohol. In 1903-4 Maurice executed almost 150 sombre, heavily-impasted landscapes of Montmagny, a village to the north of Paris. In 1906 he returned to Montmartre and began to paint the semi-rural north-eastern suburb in lighter tones. Influenced by Pissarro and Caillebotte, Utrillo made the subject of Montmartre his own.

From 1909 until around 1914 Utrillo mixed glue, plaster or cement with his paint to obtain the whites for which he became famous. His buildings show a striking contrast between the boldness of his colour and painstaking draughtsmanship achieved by ruler and compass. Eventually, these experiments led to austere monochrome works in beige and grey.

Poor health and shyness led Utrillo to withdraw from Montmartre into a series of nursing homes. His mother and stepfather, the painter André Utter (1886-1948), provided postcards of Montmartre as inspiration. In 1936 he married Lucie Pauwels and moved to Vésinet. His late landscapes have rich colours and strong, black contours. From 1937, at the request of his family, Maurice was looked after by his friend and dealer Paul Pétridès. He died in the spa town of Dax, south-western France, in 1955.

The work of Maurice Utrillo is represented in Tate Modern, London; the Musée Nationale d’Art Moderne, Paris; the National Gallery and the Phillips Collection, Washington DC. 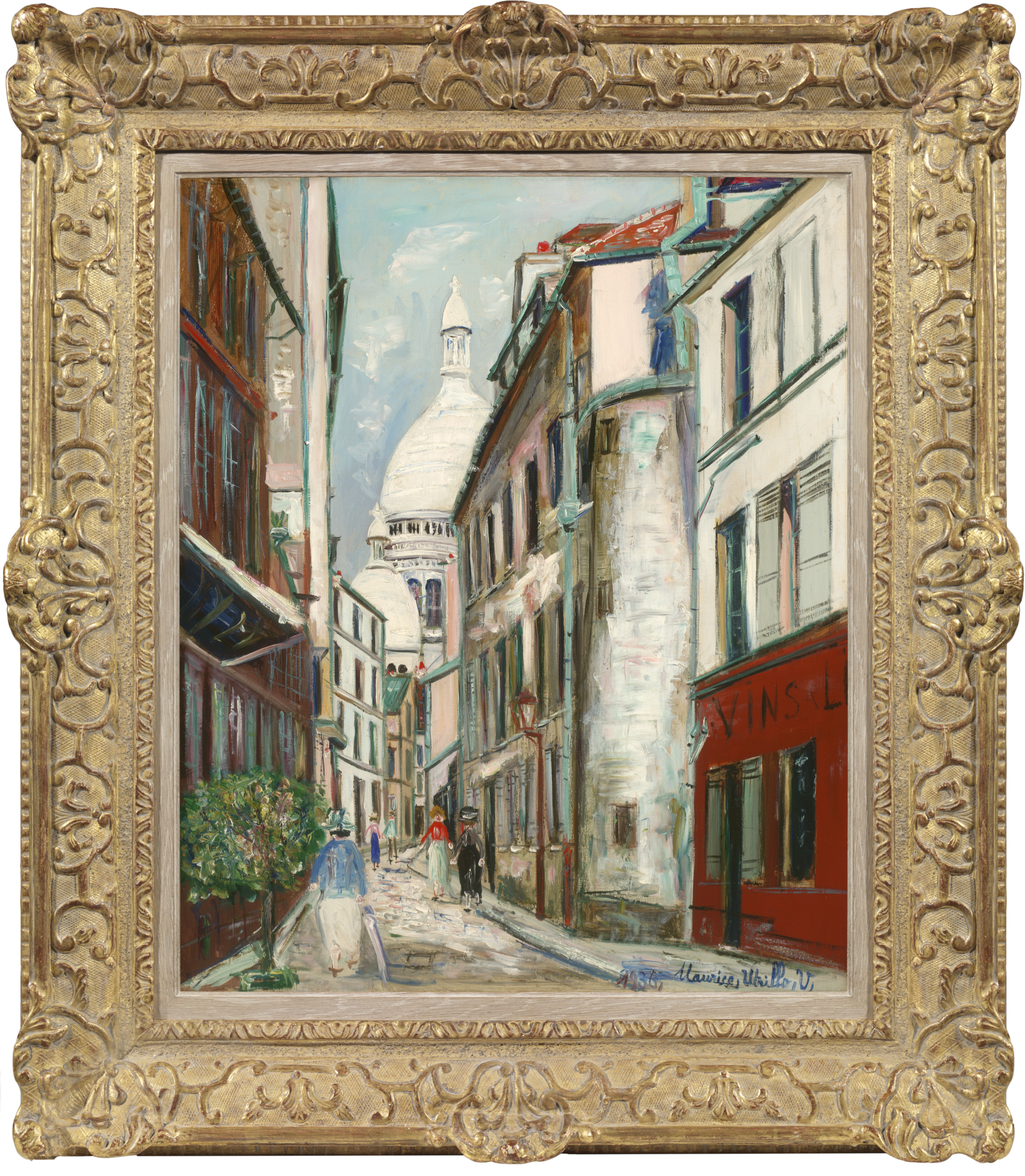