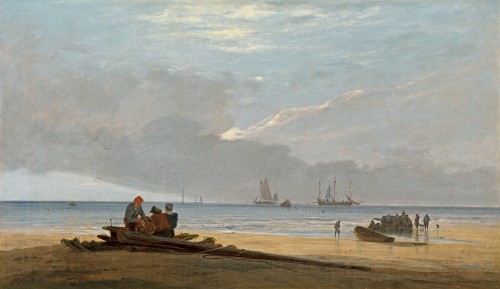 numbered and inscribed on a label attached to the

Possibly, Exhibition of the Norfolk and Norwich Association for the Promotion of the Fine Arts, 1849, no.19

Sea shore, morning is a beautifully calm panoramic seascape of subtle and exquisite colouring, with more than half the canvas devoted to the detailed study of a cloud-scudded sky. Though the scene is still and with little incident, the lighting is deftly dramatic from the layering of dark clouds on the horizon, to the foreground cast in unexpected shadow. Here three highly finished fisherman check lobster pots by the broken mast of a ship, while the middle-ground charts their colleagues progress from ship to shore. Stannard’s serene surface is completed with intense precision, which William Frederick Dickes describes as ‘an amount of Dutch finish quite unusual in the true Norwich School.’[1]

Writing of the celebrated family and their maritime views, Peter Kennedy Scott explains their continued importance: ‘The Stannard family, who often painted ships at sea, used the sands for their subjects too. Delightful paintings of fishermen, with their boats and haul, provide us with a lasting record of the life and work these men endured. In fact, much of the Norwich School landscape painting is memorable for its historic portrayal of the life and times of this part of eastern England and the toils of the past.’[2]

Alfred Stannard was a painter of marines and landscapes. Most of his landscapes are from the Norwich area and the coast around Yarmouth. He was the brother and pupil of Joseph Stannard (1797-1830). Both brothers were part of the Norwich circle of painters. Alfred reputedly studied with John Crome. Alfred Stannard principally painted scenes of his beloved Norwich countryside with motifs of shipping and light effects reminiscent of the Romantic marine painters of Holland. He exhibited in London between 1826 and 1860. He showed eight paintings at the British Institution and seven paintings at the Royal Society of British Artists, Suffolk Street.  He was a vital member of many East Anglian artistic societies amongst them the Norfolk and Norwich Association of the Fine Arts, the Norfolk and Suffolk Institution for the Promotion of Fine Arts, the East of England Art Union and the Norwich Society of Artists.