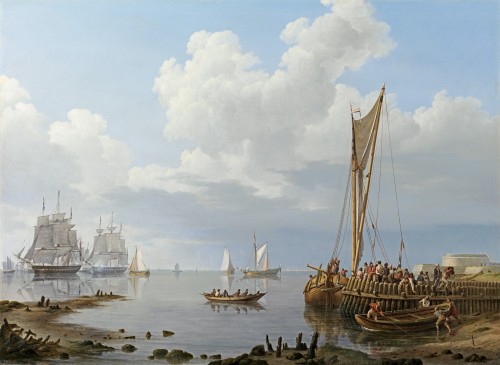 Shipping in a calm estuary

Shipping in a calm estuary

Johannes Hermanus Koekkoek was the father and the founder of a formidable family of artists, active in Holland in the late eighteenth century to the early twentieth century, which contributed greatly to the development of the Dutch Romantic School.

Born at Veere in 1778, Johannes Hermanus Koekkoek began his career employed in a tapestry factory. As an artist, he was primarily self-taught and specialised in marine and river scenes, in which he combined a meticulous attention to detail, clear colours and smooth finish. Such paintings were admired and secured him his membership of the Amsterdam Academy.

The work of Koekkoek is represented in the major museums of Holland, and the municipal art galleries of Hamburg, Munich and Bristol.