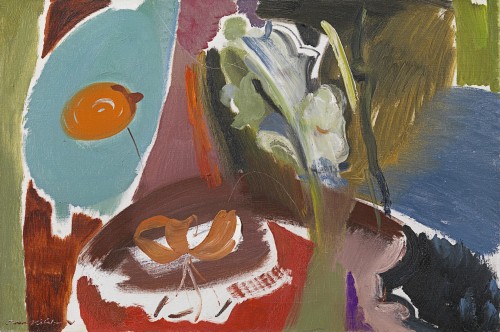 In a gessoed coloured and gilded frame

Cyril & June Mardall, acquired from the above June 1952

Single dahlia dates from roughly the mid-point of Hitchens’ sixty-year painting career. By this time his painting language has developed so far from imitation that a picture of his consists essentially in an inner pattern or harmony of shapes and colours, to be appreciated largely in its own right, regardless of subject matter. It continues, though, to be based on the experience of things seen, the shapes and colours of those things selectively forming part of that inner pattern.

The detail of the single dahlia may be slightly blurred by the vigorous upsurge of brush marks but the deftly drawn, orange-brown flower of the tiger lily below and to the left of it is instantly recognizable. This tension between the demands of the canvas—colour, shape, brush mark, texture—and the individual personality of the flowers is what makes the painting alive: it is about paint as much as it is about flowers, and by sleight-of-hand Hitchens intertwines the two.

Bold colour patches, animatedly brushed in different directions, form the background and surroundings of the dahlia in its olive green vase. They are marked off from one another by narrow channels of white primed canvas that emphasize both their shape and their non-representational character. It may be fanciful to see a magnified leaf shape in the large turquoise oval that offsets the orange poppy-head, but there is no doubt about how it works in the structure of the painting: its rightward tilt ‘answers’ the leftward tilt of the dahlia, thus creating a balanced arch from the top of which the eye naturally travels down to the tiger lily on the table. Note also the thin, curved lines that Hitchens has subtly incised into the paint with the tip of his brush, one to guide the eye into the picture, the other to release it out of the frame at the top.

In Single dahlia we see Hitchens moving away from his earlier, more conventional flower pieces, which are comparatively static and airless, towards greater freedom of form and colour, movement and gesture, exactly as he does in his landscapes of the same period.

In conversation with T.G. Rosenthal, Hitchens stated, ‘I love flowers. I love flowers for painting. It’s only that life’s too short – one can’t always do flower paintings – not a carefully arranged bunch such as people ought not to do – but doing a mixed bunch in a natural way. One can read into a good flower picture the same problems that one faces with a landscape, near and far, meanings and movements of shapes and brush stroked. You keep playing with the object’.[1]

‘Hitchens’ flower paintings, though they amount to only a fraction of his total output, are a key ingredient of his artistic make-up, some of them outdoing his landscapes in freedom and audacity. He never devoted an entire exhibition to flower pieces but placed them like punctuation marks in his shows of landscape for the sake of variety and to sustain excitement. In the early days—the 1920s and 30s—when he had still to establish his name and acquire sufficient clients to be able to earn a living, the flower paintings were a dependable source of income—their decorative qualities made an instant appeal—and to this day they have continued to be among his most sought after works, regularly fetching high prices. But they were never merely pot-boilers. Hitchens loved painting flowers. As he said himself, it was a challenge and a compulsion, especially each spring with its outburst of yellow daffodils. At other seasons much depended on what flowers he could muster from his own greenhouse, from friends’ gardens, from local florists and from imaginative visitors. The problem was especially acute in the winter months, the one time of year when, forced by the cold to give up painting outdoors, he was at liberty to turn his attention to flower subjects in his studio. Technically, the painting of flowers gave scope for two of Hitchens’ greatest gifts: his virtuosic handling of the brush and his outstanding colour sense.’ Peter Khoroche

Hitchens married Mary Cranford Coates on 27th June 1935. He and his wife left London in 1940 with their only child, John, for a caravan at Greenleaves, Lavington Common near Petworth, Sussex, after a bomb landed next door to his Hampstead studio. For the next forty years, Hitchens’ six acres of woodland near Midhurst became his home, place of study and constant source of inspiration.

In 1951 the artist won a purchase prize at the Festival of Britain exhibition, 60 paintings for ‘51.  Hitchens completed a mural at Cecil Sharp House, Regent’s Park Road in 1954, and installed another mural at the University of Sussex in 1962. In 1956 the British Council arranged a retrospective exhibition of his work for the Venice Biennale. In 1957 Hitchens was created CBE. A major retrospective of Hitchens’ work was arranged by the Arts Council at the Tate Gallery, London in 1963. In 1979 a third retrospective exhibition was held at the RA Diploma Galleries. 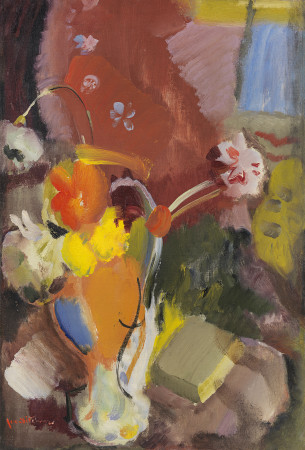 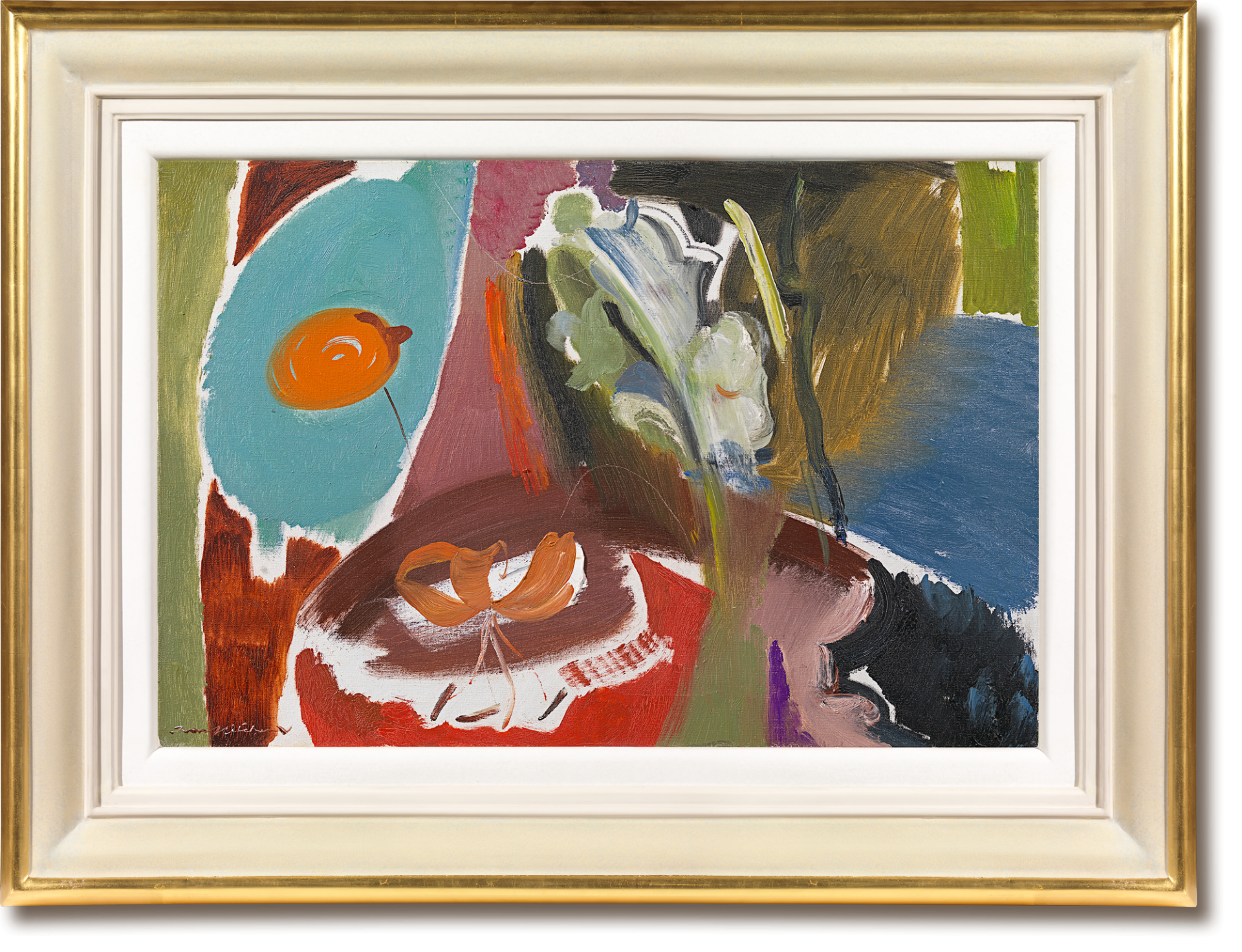