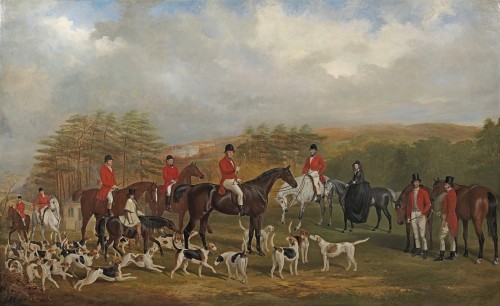 where acquired by a private collector, UK for 300 guineas;

The central figure, riding a fine dark bay, is Sir Edmund Antrobus, 3rd Baronet (1818–1899), who was Master of the Old Surrey fox hounds from 1836 to 1847. Antrobus’s land round Amesbury in Wiltshire included Stonehenge, which he guarded jealously, refusing to let government archaeologists anywhere near it. Behind Antrobus to the left is the celebrated huntsman Tom Hills, who carried the horn for forty-five seasons between 1816 and 1861. Beginning work with the Old Surrey at the age of fifteen, he was the nephew of Peckham Hills, the huntsman during the reign of Mr Snow, the London banker who hunted from kennels at Godstone at the turn of the eighteenth century[1]. To the right is Lady Antrobus, the daughter of Sir George Dashwood, 4th Bt., whom Sir Edmund had married in 1847.

Behind rise the Addington Hills and the vast mansion of Addington Palace, designed by Robert Mylne for Barlow Trecothick, Alderman of the City of London and Lord Mayor in 1770-71. The Palace was acquired by Act of Parliament in 1807 as the residence of the Archbishops of Canterbury, housing successive Archbishops until 1898.

The Old Surrey was immortalized by Surtees in his tales of the cockney grocer Mr Jorrocks, satirizing its origins as a hunt favoured by London merchants. Indeed, in the early days hunting stopped at 1pm so that the merchants could be on the ‘Change by four in the afternoon[2]. Jorrocks, the ‘Bard of Eastcheap’, explains that ‘The members of the Surrey are the people that combine business with pleasure, and even in the severest run can find time for sweet discourse, and talk about the price of stocks or stockings. “Yooi wind him there, good dog, yooi wind him.” – “Cottons is fell.” – “Hark to Cottager! Hark!” – “Take your bill at three months, or give you three and a half discount for cash.” ’. The Old Surrey, today The Old Surrey and Burstow, is still very proud of its connection with Surtees’s matchless comic creation.

This picture was part of the Hutchinson collection, formed in the early twentieth century by the publishing magnate Walter Hutchinson. His National Gallery of British Sports and Pastimes, which opened in 1948, housed an important collection of British Sporting art, including George Stubbs’s famous portrait of Gimcrack on Newmarket Heath.

William Barraud was a leading sporting artist.  He is reputed to have worked in the Customs House for a short period, but he left to devote his time entirely to painting.  He studied with Abraham Cooper and became known primarily for his pictures of horses and dogs. William exhibited regularly at the Royal Academy from 1828-1850 and at the British Institution from 1828-1849.

William frequently collaborated with his younger brother Henry, who distinguished himself both as a portraitist and a sporting artist. From 1835 until William's death in 1850, the brothers shared a studio, exhibiting jointly at the Royal Academy as well as individually. They also produced a book entitled Sketches of Figures and Animals, published by H. Graves and Co., c.1850.  William collaborated with T Fairland and compiled The Book of Animals Drawn from Nature, published by C Tilt in 1864.