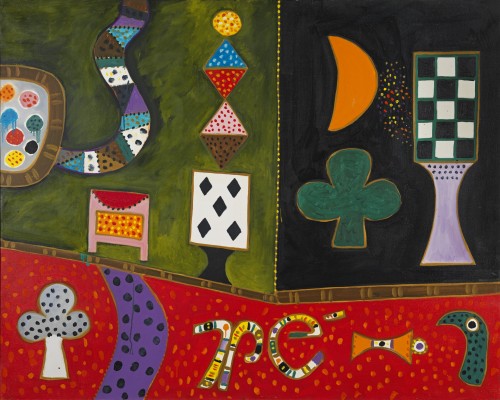 Signed, dated and inscribed on the reverse: SORCERER’S WALL NO.3 / JAN 70 /

In a gilded tray frame

In comparison to the improvisatory approach and gestural application of paint in the 1950s, Davie’s work of the 1960s and ‘70s was more considered and clearly defined. By 1968 his enigmatic symbols proliferated, playing an increasingly important role, adding to the early triangles and diamonds, clubs, stripes, spirals, playing card motifs, birds and crescent moons as seen in the present work. The new lucidity of Davie’s esoteric iconography was most likely a result of his change in practice, the improvisation previously played out on the picture surface now taking place at an earlier stage of drawing.

Writing on the importance of magic in the artist’s work and the sources of his eclectic imagery, Michael Tucker revealed: ‘Magic is a word which Davie often uses when talking about art : the magic of exaltation, of transformation – of the passage from isolation and depression to unity and affirmation, and from the exhaustion of history to the plenitude of origins…As is well known, the search for magic in painting has led Davie deep into what Jungians would call the collective unconscious ; one might say the same about the music he recorded between 1970 and 1975. It is possible to discern in Davie’s work echoes of ancient shamanic rites; Egyptian symbolism; Tantric art; the Western magical tradition, and a host of other cultures from neolithic Britain to aboriginal Australia, and from West Africa to Native America. And, throughout, there is the unmistakable mark of Davie’s own Celtic heritage, in both the luminosity of his colours and the organic interplay of his linear invention’.[1]

The spatially ambiguous pictorial field of the previous decade also developed a more distinct structure with events taking place in room like spaces or stage sets. It is possible

that a commission to paint a mural for a school in Berlin in 1969, consisting of a group of connecting, hexagonal-shaped rooms, also effected this stylistic development. Davie produced a series of drawings, gouaches and oils for the ultimately abandoned project, a number which featured walls, populated by forms that invade the room, folding out into the space (see Patrick Elliot, Alan Davie: Work in the Scottish National Gallery of Modern Art, Edinburgh, 2000, p. 87, no. 39, Ideas for a children’s wall No. 9, 1969). This rich cycle produced new forms and symbols which can be seen in the present work as well as Davie’s Guli Mask and Guli Wall series, 1969-71, and culminated in a sequence of 'Studio' paintings in 1974-5, two of which belong to the Scottish National Gallery of Modern Art.

Other Works By
Alan Davie: 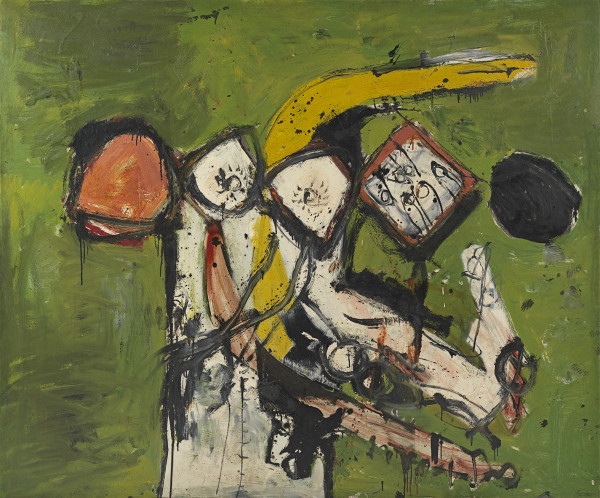