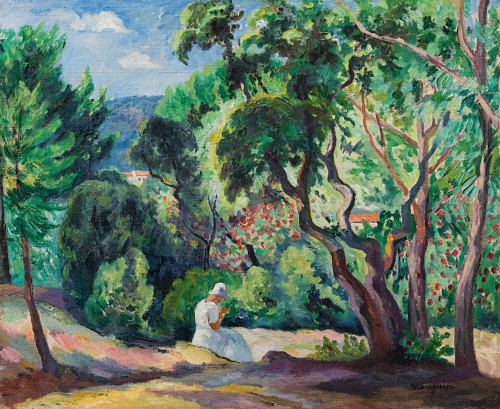 Acquired from the grandson of the artist by a private collector, France

Henri Manguin was a pupil with Matisse, Marquet, Rouault and Camoin in the studio of Gustave Moreau, a liberal teacher who sensed the ferment of originality in these young men: he told them that he was the bridge over which they would pass. They sprang to notoriety at the 1905 Salon d’Automne, with paintings in which vivid, anti-naturalistic colour is used as a vehicle to express emotion. Perspective, paramount since the Renaissance, was jettisoned in favour of eddying black lines and a pulsating picture plane. The outraged critic Louis Vauxcelles dubbed these artists ‘fauves’ (wild beasts).

Manguin first discovered the South of France in 1904, when he was invited to Saint-Tropez by Signac. From the 1920s, like his friend Matisse, he divided his time between Paris and the Côte d’Azur, renting, then buying, a house called l’Oustalet at Saint-Tropez. This painting of 1921 depicts the landscape of la Mouette, east of and inland from Saint-Tropez. By this period Manguin had moved away from the hot, clashing colours of his Fauve phase to achieve a harmonious, interlinked palette influenced by the work of Paul Cézanne. He distils the essence of the landscape through touches of colour that blend on the picture surface, evoking the pulsating brightness of the Midi. The energy of nature is suggested by the serpentine trunks of the old olives and the dense, emerald leaves of Mediterranean pines. A woman in pristine white, no doubt his muse, wife and model Jeanne Carette, sits placidly reading in the glade. The whole painting breathes an air of harmony and content.

Henri Manguin was born in Paris in 1874. In 1894 he entered the studio of Gustave Moreau at the Ecole des Beaux-Arts, a fellow pupil of Matisse, Marquet, Rouault, Valtat and Camoin, who remained lifelong friends. In 1899 he married his muse and model Jeanne Carette and in 1902 exhibited for the first time at the Salon des Indépendents. Manguin first discovered the South of France in 1904, when he was invited to Saint-Tropez by Paul Signac, with whom he shared a love of fast cars. The dazzling Mediterranean light had a profound effect on Manguin’s work. Manguin and his friends showed paintings with emotionally-charged, anti-naturalistic colour and shifting perspective at the 1905 Salon d’Automne, provoking the critic Louis Vauxcelles to dub them ‘fauves’ (wild beasts). The following year Ambroise Vollard bought 150 of Manguin’s works.

Manguin depicted nudes, landscapes, interior scenes and still lifes in a direct, painterly style, although the palette of his later work is softer and more naturalistic than that of his Fauve period. From the 1920s, like Matisse, he divided his time between Neuilly-sur-Seine to the west of Paris and the South of France, renting, then buying, a house called l’Oustalet at Saint-Tropez. Manguin also made painting trips to Normandy, Brittany and other parts of France and to Switzerland, where he gained important patrons through his friendship with Félix Vallottan. Manguin died at Saint-Tropez in 1949. In 1950 the Salon des Indépendents organized a major retrospective of his work.

The work of Henri Manguin is represented in the Musée d’Orsay, Paris; the Hermitage, St Petersburg; the Museo Thyssen-Bornemisza, Madrid; the Metropolitan Museum of Art, New York and the Art Institute of Chicago. 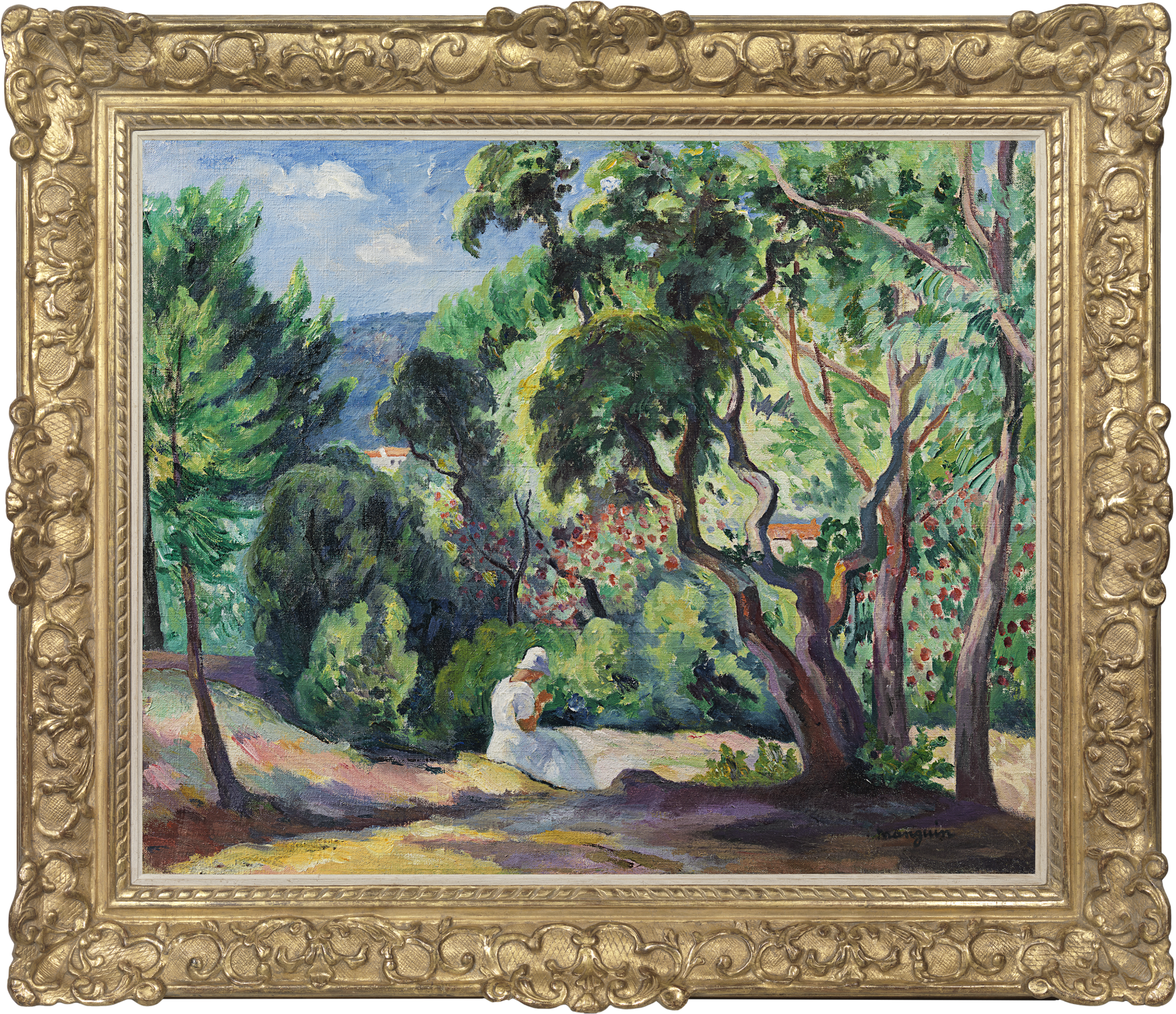