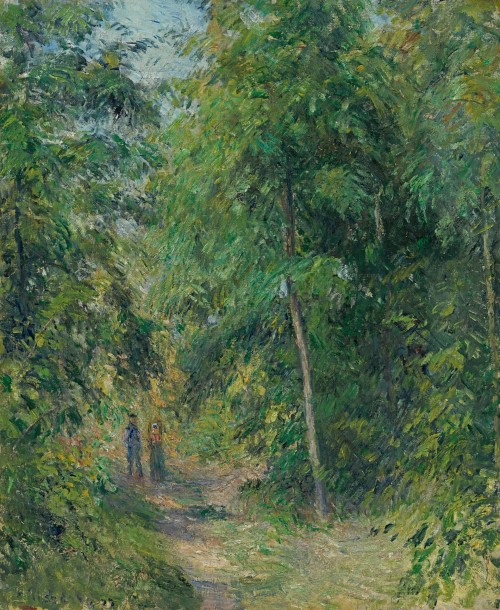 Jeanne Pissarro-Bonin (the artist’s daughter, inherited from the above in 1921);

Madame Raymond Subes (inherited from the above in 2000);

Camille Pissarro painted no fewer than 300 oils, not to mention countless drawings, engravings,

pastels and gouaches of Pontoise and its surrounding countryside. Not even Courbet at Ornans,

Chintreuil at Igny, Corot at Ville-d’Avray, Millet at Barbizon or Monet at Argenteuil worked

with such intensity, producing such a diversity of motifs in a single place. Following several

short sojourns in 1866-68, Pissarro settled again in Pontoise, after his return from London, where he and his family were in exile during the Franco-Prussian War. He returned to Pontoise in 1872 and remained there until 1882, creating there one of the most important pictorial chapters in the history of Impressionism.

Pontoise lies some thirty kilometres northwest of Paris in the region known as the French Vexin.

a tributary of the Seine – and is enclosed by two valleys: the valley of L’Hermitage to the

northeast, where Pissarro lived, and, to the southwest, the valley of the Viosne, a small

watercourse that flows down from the hamlet of Osny and the plateau of the Vexin into the Oise. Pontoise was linked to Paris and Rouen by railway, as early as 1863. Pissarro concentrated his attention mostly on these intermediary sites – the villages on the outskirts of Pontoise, rather than pure townscapes or pure landscapes. Pure landscapes, such as this gorgeous composition, are relatively rare during Pissarro’s time in Pontoise. The slice of nature reflected by Camille

Pissarro in Sous-bois à Pontoise stands in, with its own verdant and organic architecture,

towering over, and sheltering the two figures that provide the focal point in this composition.

This overall natural framework, opening up at the top of the composition to allow a fragment of

sky to be seen, filters through the sunlight. The light is freckled through the foliage and dapples

onto the path that guides the steps of these two figures, a technique that signals Pissarro’s

awareness of Renoir’s treatment of light through its interaction with nature. Sous-bois à Pontoise

closely relates to another painting of two figures on a path in the woods executed the same year,

titled Chemin sous-bois, en été (1877), in the collection of the Musée d’Orsay in Paris.

Joachim Pissarro, Ph.D., Bershad Professor of Art History and Director of the Hunter College Art Galleries, and author of the Catalogue Raisonné of the Paintings of Camille Pissarro

This painting was in the collection of Dr Georges Viau (1855-1939), a distinguished dental surgeon who built up an outstanding collection of Impressionist and Post-Impressionist paintings, including major works by Monet, Morisot, Cézanne, Gauguin, Degas, Manet, Pissarro and Renoir. A portrait of him by Edouard Vuillard, Le docteur George Viau dans son cabinet dentaire, 1914, is in the Musée d’Orsay.

Camille Pissarro was perhaps the greatest propagandist and the most constant member of the Impressionists and the only one to participate in all eight of their exhibitions. Born in 1830 in the Danish colony of Saint Thomas([1]) in the West Indies, of Sephardic Jewish parentage, he went to school in Paris and then worked in his father’s business for five years. Ill-suited to being a merchant, Pissarro decided to become a painter, studying at the Ecole des Beaux Arts and the informal Académie Suisse. He was considerably influenced and encouraged by Corot and to a lesser extent by Courbet.

In 1885 Pissarro came into contact with Seurat and Signac and for a brief period experimented with Neo-Impressionism. The rigidity of this technique, however, proved too restrictive and he returned to the freedom and spontaneity of Impressionism. From 1893 Pissarro embarked upon a series of Parisian themes, such as the Gare St Lazare and the Grands Boulevards. He continued to spend the summers at Eragny, where he painted the landscape in his most poetic Post-Impressionist idiom. Pissarro died in Paris in 1903.

[1] Today part of the US Virgin Islands.