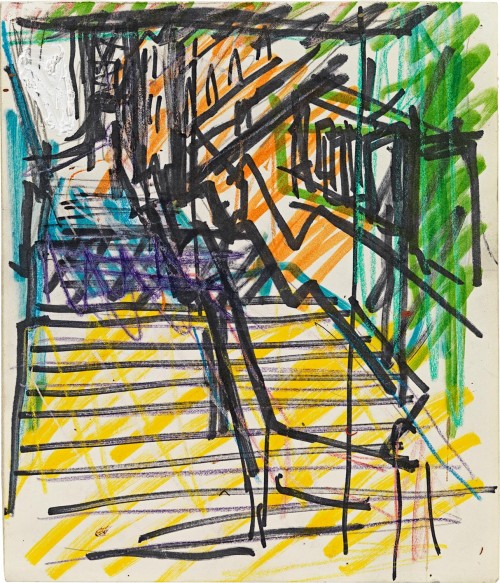 Inscribed and dated on the reverse: St. Pancras Steps / 78-9

Private collection, UK, acquired from the above in 1979

‘I feel London is this raw thing…This extraordinary, marvellously unpainted city where wherever somebody tries to get something going they stop halfway through, and next to it something incongruous occurs…this higgledy-piggledy mess of a city.’[1] Frank Auerbach

This arrestingly vibrant sketch of St. Pancras steps in Auerbach’s Camden neighbourhood of north London, relates to two large oil paintings of the same title and date; one in a private collection (Study for St Pancras steps, oil on board: 54 x 48 in) and the other at Touchstones Art Gallery and Museum, Rochdale (St Pancras steps, oil on canvas: 66 ¼ x 54 in).[2] In the present work, Auerbach has already established the viewpoint at the bottom of the steps with a small, window-like segment of sky at the top left and the composition’s jagged, geometric structure dictated by the stairs. Part of the palette also remains from drawing to painting, in particular the use of orange, green and white, but both paintings are more muted and lack the dynamism of Auerbach’s spontaneous sketch. A frenetic network of thick black lines zig-zag across the paper, rapidly constructing the armature of the architectural subject and its recessive space. Electrified by the light ground of the paper, scribbled areas of brilliant colour vibrate across the page, the warmth of orange and yellow balanced by shaded sections of green, purple and blue. The palpable sense of immediacy and movement is further heightened by Auerbach’s use of different media; the thick texture of paint at the top left surrounded by slick, graphic pen lines, layered with the softer marks of wax crayon to dexterously capture Auerbach’s chaotic city scene.

Auerbach usually sketches in the morning, creating a vivid record of sensation inspired before the subject with topographical notations to determine the ‘formal geometry that will encapsulate the thing that I’m trying to paint.’[3] In his catalogue of the artist’s work, William Feaver describes this primary stage in the artist’s process: ‘Up early, out before seven as a rule, Auerbach goes to a likely, or already chosen, spot (“I look for something that corresponds to my wish for the next picture”) and positions himself in relation to landmarks such as pillar boxes or lamp posts…he gets the feel of wherever he is, the staying power of buildings spiced with the business of urban life, and draws vigorously for a while, usually with felt-tip pen…sometimes accentuated with coloured crayon. They maintain the pace, feeding spontaneity into the day-to-day business in the studio. A sense of animation prevails.’[4]

Two years before St Pancras steps was created, R.B. Kitaj referred to the School of London in The Human Clay exhibition at the Hayward Gallery, linking the contemporary British artists he most admired, including Auerbach, Francis Bacon, Lucian Freud and Leon Kossoff, who would go on to become celebrated icons of British art into the twenty-first century. In 1978, the year this drawing was made, the Arts Council held Auerbach’s first retrospective. In his foreword for the catalogue, Leon Kossoff wrote of the artist’s work: ‘Out of darkness, drawn from unknown areas of the self, the landscapes, the heads, and the nudes remain with us, gleaming in the mind – a gleam of light and warmth and life.’[5]

Frank Helmut Auerbach was born on 29th April 1931, to Max Auerbach and Charlotte Nora Burchardt. In 1939 Auerbach was sent to school in England with five other children, sponsored by the writer Iris Origo. After boarding the ship in Hamburg, he never saw his parents again.  The school, Bunce Court at Lenham, near Faversham, Kent, was evacuated to Shropshire from 1940-45. Having left school with a Higher School Certificate in 1947, Auerbach acted in plays at the Tavistock, Torch, Twentieth Century and Unity Theatres, where he met Estella West. He also attended painting classes at the Hampstead Garden Suburb Institute. In 1948 Auerbach enrolled at the Borough Polytechnic Institute, where he studied for two terms before starting at St Martin’s School of Art in September, where he met Leon Kossoff and Phil Holmes. He continued to go to drawing classes at the Borough Polytechnic, taught by David Bomberg, two evenings a week throughout 1954.

Declared unfit for the army, Auerbach continued his studies at the Royal College of Art from 1952-55. In 1954 he moved to Kossoff’s studio in Camden until his marriage to Julia Wolstenholme, another student of the Royal College, in 1958. Auerbach left the Royal College in 1955 with a silver medal and first-class honours. He exhibited at the Beaux Arts Gallery summer exhibition and then held a one-man show there in 1956. He taught in secondary schools and then at various art colleges, including Camberwell and the Slade, one day a week until 1968.  Auerbach first exhibited at Marlborough Fine Art, London in 1965 and has continued to show at its associated galleries.

In 1978 the Arts Council of Britain held the first retrospective of Auerbach’s work at the Hayward Gallery. Frank Auerbach Paintings and Drawings 1977-85 was held in the British Pavilion at the XLII Venice Biennale, June-September 1986. He was awarded the Golden Lion prize along with Sigmar Polke. In 1990 Robert Hughes published his monograph on the artist. In 1995 an exhibition based on drawings made from works in the National Gallery’s collection was presented, entitled Frank Auerbach at the National Gallery: Working after the Masters. In 2001 an exhibition of Auerbach’s paintings and drawings from 1954-2001 was held at the Royal Academy, London. Frank Auerbach lives and works in London.