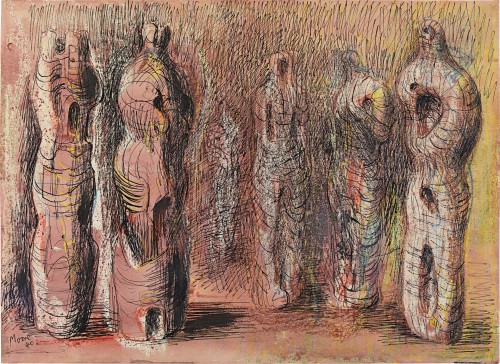 Recorded in the Henry Moore Foundation archives as HMF 1511

In November 1939, Kenneth Clark, the Director of the National Gallery, London, was appointed the Chairman of the War Artists’ Advisory Committee and it was Clark who was able to persuade a very reluctant Henry Moore to become an official War Artist. During this time the walls of the National Gallery had been stripped bare and its treasures had been removed and transported to Wales. They safely remained in Bangor and several other locations in Wales for the duration of the war. The National Gallery remained open to the public - despite it being bombed several times during the Blitz - and would hold free lunchtime concerts everyday where musicians, such as the distinguished pianist Myra Hess, would play. These concerts would draw in huge crowds and many would stay after to view the work of the war artists that now hung on the walls. It was thanks to Clark’s persistence that Moore became a War Artist and began to receive wider exposure for his work, his recognition from the public was instantaneous – “People could relate to them because they were drawings of themselves” (Henry Moore).[1]

The grouped and hollowed figures in Standing figures, 1940 have large, bulking forms that appear alien and unfamiliar in comparison to our own. In the conception of these hollow figures, ‘Moore seems to have created a credible alternative to the human race, as if millions of years ago, evolution had taken a different course…That the internal-external figures are, to some extent, inspired by hollow trees, is clear enough in the early drawings of the motif, where the edge of the aperture has the gratifying bluntness of wood.’[2] Standing figures, 1940 is a drawing executed in the early stages of Moore developing this motif. Here the standing forms show the apertures and caves normally found in the form of trees and Moore transposes them onto the shape of a human body. As he continued to develop this motif through his drawing, the exterior of the forms gradually changed from wooden to metallic in texture and came to possess a harsher surface. Here the ‘mechanism of the interior becomes more assertive’ (Kenneth Clark). Moore then went on to his drawings to further experiment with this motif - the ‘internal-external figure’ - in sculptural relief. Standing figures, 1940 is not a preparatory study for sculpture but a fully realised work of art in which Moore has created form through a colourful use of mixed technique. Though not preparatory it does mirror the exploration of forms in space that later preoccupied Moore in his sculpture works.

Potentially reflective of the period in which it was created, this drawing harbours a sensation of alienation. The figures themselves have strange and unknown forms and though grouped they stand alone, detached from one another. In 1940 Moore began his Shelter Drawings. After the Blitz started (7th September 1940) many Londoners would seek refuge in the tunnels of the Underground and Moore became drawn to the tragedy of the city’s situation. Though none of the drawings, as in Standing figures, 1940, were specific in their location or aiming to capture particular people, they embodied the fear and isolation that was inescapable. This looming tension is evident in the unidentifiable bulking forms that command the pictorial space of this drawing; they seem tense and as though caught in a moment of nervous apprehension. The anxious nature of the repetitive markings made through the overlapping layers of pen, crayon and chalk, opposes the naturally calming nature of the wood. Moore himself spoke of how art and nature often coincide in their randomness and of how most of what occurs in both is accidental.

“Art tends to arrive as a true result through instinct … Besides the human form, I am tremendously excited by all natural forms, such as cloud formations, birds, trees and their roots.” (Henry Moore)

In 1940 Moore’s studio in Hampstead was significantly damaged by bombing and the artist left London for the village of Perry Green near Much Hadham in Hertfordshire. Within a few months Moore and his wife Irina were renting an old farmhouse called Hoglands. Hoglands would come to be their family home and remained so for the rest of their lives.