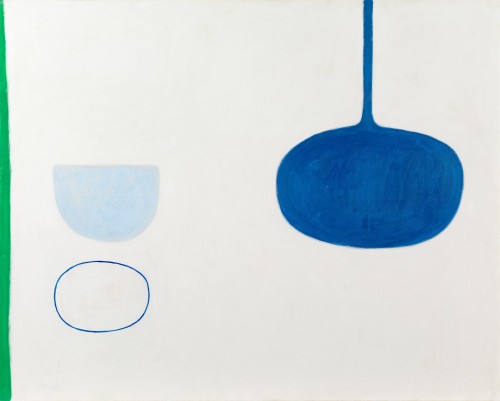 Signed and dated on the reverse: W SCOTT 71

private collection, Ohio, USA, acquired from the above in March 1973

From 1969 to 1972, Scott executed a series of carefully controlled, minimalist still lifes, whose objects are abstracted into succinct silhouettes, hovering weightlessly on flat or softly variegated grounds. Like the highly refined forms, Scott’s application of paint is remarkably restrained, with little sign of the artist’s actions, allowing attention instead to fall on subtle ambiguities and internal tensions between echoing shapes. For Norbert Lynton, ‘The clarity of these neoclassical still lifes also addresses our senses as perfection: a few notes cleanly struck, at finely judged intervals...As in the best Neoclassical painting and sculpture, purity is revealed as refined sensuality, austerity as an acute form of luxury.'[1] By the late 1960s, Scott had achieved a considerable international reputation as a painter, with works in major collections, both public and private, worldwide and in 1972, the Tate Gallery held a major retrospective of his career presenting a wide range of works from 1938–71.

In 1946 Scott was appointed Senior Painting Master at Bath Academy, Corsham.  He was elected a member of the London Group in 1949 and in 1953, after teaching at a summer school in Canada, Scott visited New York, where he met Jackson Pollock, Willem de Kooning, Mark Rothko and Frans Kline.  In 1958 a retrospective exhibition of Scott’s work was exhibited at the British Pavillion at the Venice Biennale, and he was commissioned to create a large mural for Attnagelvin Hospital, Londonderry.  In 1959 he was awarded first prize in the painters’ section at John Moores Liverpool Exhibition.  William Scott died on the 28th December 1989.