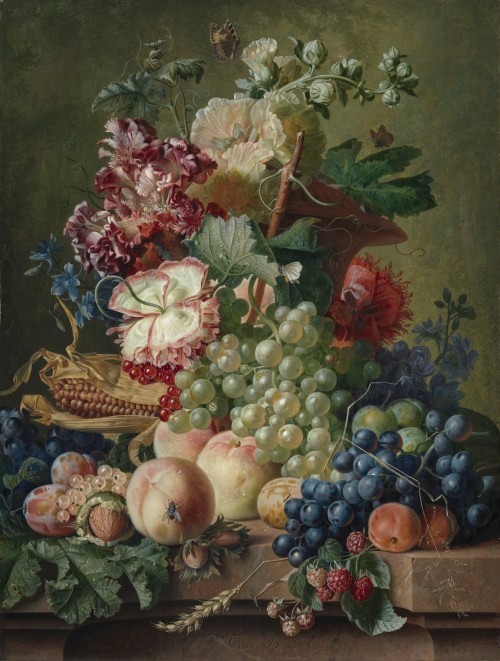 Still life of flowers and fruit on a stone ledge

A still life of fruit and flowers, grouped around a garden urn, on a shaped marble ledge: white and black grapes, peaches, plums, apricots, blackberries, red and white currants, a walnut and hazelnuts, a corn cob and an ear of wheat, hollyhock, larkspur, and a poppy anemone

by whom bequeathed to his daughter, Almina, Countess of Carnarvon, London, 1918;

Paul Theodor van Brussel was initially trained in Haarlem by Jan Augustini, Hendrik Meijer and Vincent van de Vinne, as a painter of wall hangings. After his marriage at the age of twenty, in 1774, he moved to Amsterdam, where he began to specialize in painting still lifes of fruit and flowers. Dated examples of these are known from 1774 to 1794, but van Brussel’s extant oeuvre remains relatively small. Apart from still lifes of flowers and fruit, a few landscapes by his hand are known. Unlike contemporaries such as Gerard and Cornelis van Spaendonck and Jan Frans van Dael, van Brussel remained in the Netherlands, rather than moving to Paris where those colleagues became very successful by adapting a more French style. Paul Theodor van Brussel was reported by contemporaries to have been an amiable man, who also was a skilled ice skater. He was unfortunate in an encounter with water that was not frozen over, however: he drowned at the age of forty.

Van Brussel’s still lifes, of which the present work is a particularly well preserved and finely detailed example, reflect the influence of Jan van Huysum (1682-1749) and that of Jan van Os (1744-1808) in particular. The artist adopted their idiom and refined handling, but his work remains individually recognizable. Upon his arrival in Amsterdam, he may have been in contact with, and perhaps taught by, Wybrand Hendricks (1744-1831), who also painted still lifes in a similar refined style and idiom and who moved to Haarlem in the following year. The Arnhem

still-life painter Gerrit Johan van Leeuwen (1756/58-1825) may have been his competitor when that artist was working in Amsterdam during the early 1780s. Many of Paul Theodor van Brussel’s still lifes of flowers and fruit are highly refined paintings. The artist was a great master in rendering the substance and texture of his motifs meticulously. He bathed his still-life compositions in a bright but rather soft, even light that allowed him to expose every detail of his subject. Invariably, the artist would include one or two butterflies, a bluebottle, and other creatures into his compositions in order to enliven them. His choice of flowers and fruit usually remained restricted to popular, readily available species, such as roses, hollyhocks, tulips, and poppies, and grapes, plums and peaches, rather than exquisite botanic novelties. During the 1780s, Paul Theodor van Brussel was at the height of his abilities, producing a series of highly refined and attractive still lifes of which the present work is indeed an excellent example. Works of comparable quality can be found in the Fitzwilliam Museum, Cambridge (dated 1783, 1786 and 1792), while a good example from 1786 was with Richard Green in 1987 (cat. no. 21), and a few other dated examples are in private collections.

Van Brussel’s success can also be measured by the fact that several contemporary copies of his still lifes are known, a number of which can be attributed to Johannes Christianus Roedig (1750-1802), an artist who was working in The Hague. Among the examples that can probably be attributed to Roedig is a good copy of the present still life, bearing a false van Brussel signature and the date 1787, which was sold along with a companion piece at Christie's Amsterdam, 6th May 2008, lot 173.