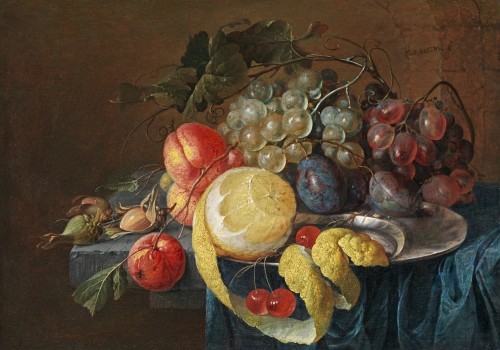 Still life of fruit on a hardstone slab, partly covered with a blue cloth

Still life of fruit on a hardstone slab, partly covered with a blue cloth

Cornelis de Heem was born in Leiden, the son of the eminent still-life painter Jan Davidsz. de Heem (1606-1684), who was also his teacher. In early childhood he moved with his parents to Antwerp, where between September 1660 and September 1661 he became a member of the Guild of St Luke in his own right, after having worked under his father’s guidance for many years. In 1667 he briefly stayed with his father in Utrecht, subsequently probably moving on to Amsterdam. By 1676 Cornelis de Heem was living in IJsselstein, near Utrecht, from where he moved in the same year to The Hague. There he became a member of the Confrerie Pictura, the local association of artists, until at least 1687. Sometime around 1690 he returned to Antwerp, where he died. Cornelis de Heem painted flower pieces, fruit, and rich still lifes; dated works are known from 1654 to 1690, but dates after 1665 are extremely rare. In The Hague, after about 1680, he was sharing his studio with his son and pupil, David Cornelisz. de Heem (1663-1701/14), and many of the works from that period appear to have been collaborations of father and son, often signed by the father.

Cornelis de Heem painted quite a few still lifes of fruit in the course of his career. Early works, from the time when he was still working in his father’s studio, are mostly fairly large, more complex compositions (fig. 1). Jan Davidsz. de Heem probably allowed him all the time he needed to develop and complete them. After his father had moved to Utrecht, Cornelis de Heem was compelled to make his own living and mostly reverted to smaller and less complex compositions, which probably provided a more steady income. They included festoons, flower paintings, and fruit pieces – often with lobsters or crayfish – and combinations of those motifs. A somewhat larger example from about 1660 was with Richard Green in 1994 (fig. 2). The painting presented here is a characteristic small Cornelis de Heem composition, a typical cabinet piece, of a type that he painted frequently after c.1660. Many of its motifs appear similarly in other works, such as the lemon, a branch of apricots, hazelnuts, the pewter dish, the blue table

cloth, and the hardstone niche in the background.

There are only few references for the dating of this still life, but chronologically it must certainly be situated before 1671, when Cornelis de Heem painted a dated still life now in Brussels (fig. 3) and probably also before a dated work from 1665 (fig. 4). The 1671 still life is rather hard in its execution and the light is quite dramatic, which is a characteristic of Cornelis’s later works. In the dated example from 1665 the light is concentrated on the central arrangement of fruit, leaving the background in the dark, but the overall lighting is softer, as is the rendering of the textures. More evenly lit is an earlier example of this type in the Musée Fabre in Montpellier, France, which is dated 1659 (fig. 5). The origin of the present still life must probably be situated between that work and the example from 1665, so in the first half of the 1660s. Presumably from about the same time as the painting presented here are two still lifes of fruit, also relatively small, judging from the handling and palette (figs. 7 and 8).

The signature of this painting is Cornelis de Heem’s characteristic signature in capitals and also in other examples it is placed in a similar spot (fig. 6). The initial C is only very faintly visible. It was probably removed sometime in the past in order to sell it as a work of Cornelis’s more famous father, Jan Davidsz. de Heem.

There is little indication that Cornelis de Heem intended paintings such as this one to convey any specific message. There are not, as is often the case in such works, obvious signs of decay, although there is a bluebottle on one of the apricots. The notion of vanitas is thus restricted to the common notion that fruit is only edible for a short time and that consequently the beauty presented here is only temporary. Most of all, this still life was doubtlessly painted to please its viewers and, particularly, its owner with the artist’s illusionist capabilities.

Other Works By
Cornelis de Heem: 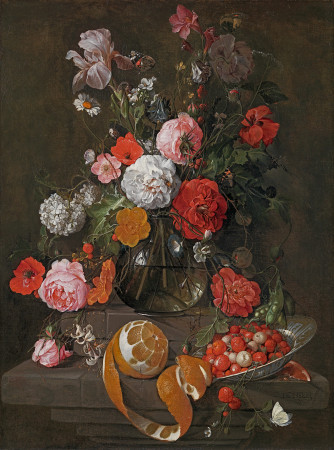