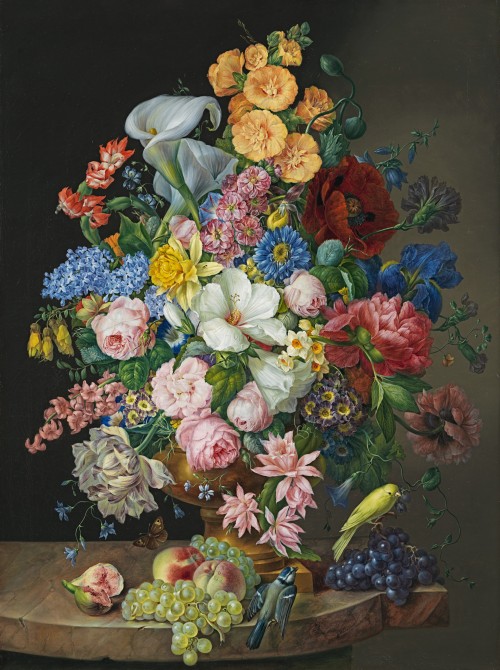 Still life of roses, arum lilies, a peony, lilac, hollyhocks and other flowers in an urn, with a bluetit, a canary and a Meadow Brown butterfly (Maniola jurtina) and fruit on a marble ledge

Still life of roses, arum lilies, a peony, lilac, hollyhocks and other flowers in an urn, with a bluetit, a canary and a Meadow Brown butterfly (Maniola jurtina) and fruit on a marble ledge

This magnificent flowerpiece, a rainbow cascade of around thirty species, attests to the sophistication of the genre in Vienna in the first half of the nineteenth century, the period known as Biedermeier. As Prof. Dr Gerbert Frodl has commented, ‘No other contemporary European artistic centre set a greater value on this pictorial theme’[1]. Vienna was a city close to nature: vineyards climbed the hills of the suburbs. A deep emotional response to the natural world seeps into the music of Schubert and Beethoven, who loved to compose while walking in the countryside. Indeed, the famous first notes of the Fifth Symphony are said to echo the song of the yellowhammers which lived among the vines.

The tone was set by the Imperial family, several of whom were highly knowledgeable amateur botanists and plant collectors. The famous botanist Nikolaus von Jacquin (1727-1817) worked in Vienna and after 1800 the city became a centre for scientific and botanical illustration. There was in addition close collaboration between the Vienna Academy and the Vienna Porcelain Factory, which was renowned for its exquisite floral decoration on plaques and vases. Artists could receive specialized instruction in a Manufakturschule connected with the Academy.

Franz Xaver Petter was one of the most successful flower painters of his day. The son of a painter of porcelain, he devoted himself almost exclusively to easel painting. From 1815 he was a Corrector (teaching assistant) at the School of Flower Drawing at the Academy of Fine Arts, exhibiting at the Academy from 1816. In 1832 he took up a position as Professor at the Manufaktur Zeichenschule and became Academic Counsellor and Director of this institute in 1835, retiring in 1851.

This painting reflects the superb attention to detail, the clear, bright colours and the sheer delight in abundance of Petter’s work. Flowers from every season and of far-flung provenance, culled from the gardens and hothouses of Vienna, are packed into a dense bouquet. There are arum lilies, native to Africa; auriculas, originally from the mountain ranges of central Europe; Christmas cactus (Schlumbergera) from Brazil, as well as familiar flowers like pansies, lilac and hollyhocks. Some species are barely glimpsed in the complex composition. A magnificent tropical orchid nestles beside the poppy at top right. On the left, a marigold peeps behind the spray of lilac, its orange colour a vivid contrast to the lilac flowers and glossy green leaves.

Since these flowers bloom at different times of the year, Petter must have composed the bouquet from drawings or watercolours studied from life and kept as a reference in the studio. The same flowers appear across more than one work. The arum lilies at the apex of this painting, one turned towards the viewer, the other away, are something of a leitmotif. They appear in a lavish Still life of exotic flowers and fruit, dated 1829 (private collection)[2], adjacent rather than overlapping, but exactly the same shape.

The lavishness of the bouquet was inspired by later seventeenth century Dutch flower painting, particularly the work of Rachel Ruysch (1664-1750) and Jan van Huysum (1682-1749). The latter, especially, liked to pair bouquets with depictions of birds and fruit. Their influence on Viennese flower painting derived from Petter’s teacher Johann Baptist Drechsler (1766-1811), who disseminated it to his many pupils. However, the crystalline clarity of Petter’s bouquet, which has the air of being painted on porcelain even though it is on canvas, proclaims it a triumphant example of Viennese Biedermeier style.

Franz Xaver Petter was born in Vienna, the son of the porcelain decorator Jacob Petter, and lived and worked in that city all his life. His cousin was the history painter Anton Petter. At the Vienna Academy of Arts he was a student of the flower painters Johann Baptist Drechsler (1756-1811), who founded its specialist school of flower painting, and Sebastian Wegmayr (1776-1857). In 1814 he was appointed Corrector (teaching assistant) at the Viennese Blumenzeichenschule. In 1832 he took up a position as Professor at the Manufaktur Zeichenschule and became Academic Counsellor and Director of this institute in 1835. His son Theodor Petter (1822-1872) also became a flower painter.

Petter worked in the Biedermeier period during which, particularly in the German-speaking countries, genre painting was the most popular subject, with Georg Ferdinand Waldmüller (1793-1865) as its most important exponent. Such works were executed in great detail with substantial refinement, while their narrative subjects tended towards a certain sentimentality. The tendency towards refinement and sweetness is also clearly present in flower painting. During the early decades of the nineteenth century a relatively large number of highly skilled flower painters were active in Vienna, Petter and his teachers among them. Many of them also had a relationship of some kind with the Viennese porcelain manufacture. Moreover, there was a great interest in botany, in which the botanical illustrators Nicolaus von Jacquin (1727-1817) and his son Joseph Franz played an important role.

While Petter’s teacher Johann Baptist Drechsler (1766-1811) improvised particularly on the compositional schemes of floral bouquets by such artists as Jan van Huysum (1682 -1749) and Rachel Ruysch (1664-1750), Petter’s inspiration appears to have come less directly from one or two specific predecessors. His style is a clever and natural-looking amalgam of a century and a half of European – and particularly Dutch – flower and still-life painting. His refined technique is a worthy rival to that of his examples. Like Drechsler, Franz Xaver Petter often supplemented his arrangements with some fruit on the ledge and in his larger compositions he often included a lively parrot or parakeet.

The work of Franz Xaver Petter is represented in the Österreichische Galerie Belvedere, Vienna and the Liechtenstein Princely Collections, Vaduz.

Other Works By
Frans Xaver Petter: 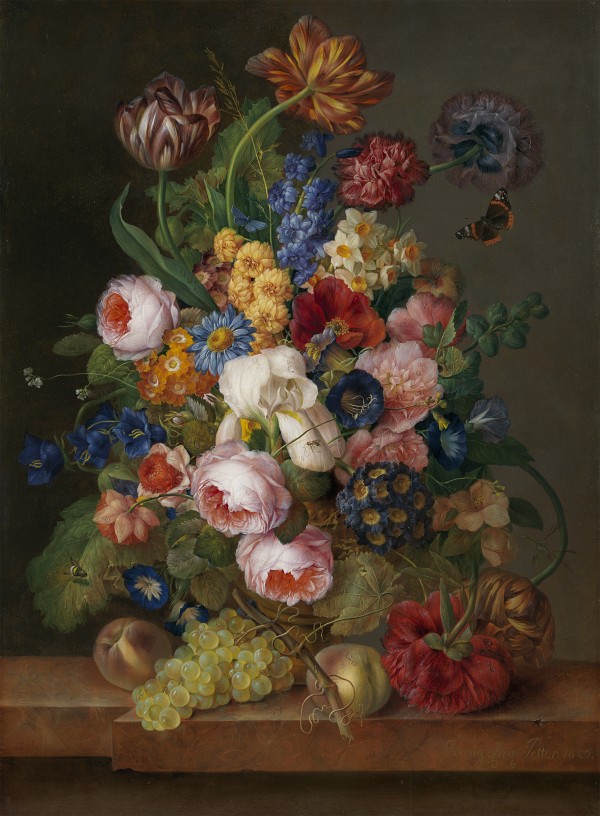