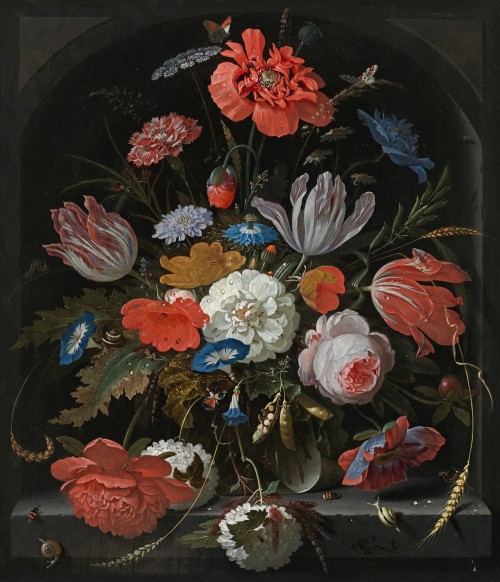 By descent in a private collection, UK since at least the late nineteenth century

Abraham Mignon was a descendant of Walloons – French-speaking Calvinists who emigrated to Frankfurt to avoid persecution by the Spanish rulers of the Southern Netherlands. He trained in Frankfurt with the flower painter and art- and tulip-dealer Jacob Marrell (1614-1681), following Marrell to Utrecht in the mid-1660s. From 1669 to 1672 Mignon worked in the studio of Jan Davidsz. de Heem (1606-1684), one of the finest and most innovative flower painters of the century.

This beautifully-preserved painting, hidden away in a UK private collection for more than a century, has been dated by Fred Meijer after 1672, the year that de Heem returned to his former home in Antwerp because of the upheavals of the Dutch wars with France. Mignon was left in charge of the field as the finest still life painter in Utrecht, producing some of the most spectacular flower pieces of his career. Magdalena Kraemer-Noble characterizes this period as one of ‘freedom and brilliance’[1]. Sadly, Mignon did not have long to enjoy his prominence: he died in 1679.

This picture reflects Mignon’s extraordinary balance of energy and delicate observation. A bouquet of flowers is arranged in a glass vase set in a stone niche. Its abundance is barely contained within the space: a peony and a snowball flop forward over the stone ledge, so close they almost seem within the viewer’s touch. At the same time, Mignon does not let the composition tip over into baroque excess. The flowers are contained within the halo-like frame of the niche; they overlap one another, but not so much that we cannot appreciate their individual personality. The bright colours which Mignon derived from de Heem move the eye harmoniously around the panel. The top, bottom, left and right of the painting are anchored by blooms of brilliant red. A beautiful white rose glows at the centre, while the shadows are filled with more modest blue flowers.

Mignon learned his acute observation of nature both from Marrell and de Heem. Marrell’s paintings are botanically very accurate. While a teenager in Marrell’s Frankfurt studio, Mignon taught drawing and painting to Marrell’s stepdaughter Maria Sybilla Merian (1647-1717), who became one of the most accomplished naturalists and scientific illustrators of her day. The three tulips which are an important feature of the present work no doubt reflect Marrell’s immersion in the world of tulip bulb collecting and dealing, although the ‘Tulip Mania’ of the 1630s had long since subsided. The prized flame patterns on tulips, so superbly explored in Mignon’s painting, were caused by a virus, although this was not understood at the time. It seemed something of a miracle when a supposedly monochrome bulb shot forth tongues of scarlet and purple. The Welsh horticulturalist Sir Thomas Hanmer, in his Garden Book of 1659, likened the numinous quality of tulips to the Sermon on the Mount’s ‘lilies of the field’ that ‘toil not, neither do they spin….yet even Solomon in all his glory was not arrayed like one of these’[2]. Hanmer wrote: ‘The Tulipe is the Queene of Bulbous plants, whose Flower is beautifull in its figure….Wee had it first out of Turkey about fifty years since, where it grows wild in some parts, particularly about Jerusalem as they write, and is thought to bee that flower translated ill a Lilly, which was sayd to bee more gloriously array’d than Solomon’[3].

From Jan Davidsz. de Heem Mignon imbibed the balance between realism and painterliness, the building up of layers and the use of glazes to evoke the different textures of flowers, from the waxy tulips to the tissue-thin poppy petals. De Heem also made decorative use of ears of wheat, a motif found in the strongly-lit, graceful stalks and serpentine blades of wheat in Mignon’s painting. Mignon’s mature work, with its instinct towards the graphic, makes intense play of stalks and boundaries, creating out of light the super-fine edge of the bursting pea pod, for example. He loves to grasp the unique shape of each object in nature and turns a microscopic attention on its tiniest elements. The ants on the white rose are provided – astonishingly – with their own shadows, while only the fiercest gaze on the part of the viewer will discover the spider’s web, complete with trapped scabious petals, which trails across the love-in-a-mist at the top centre of the painting.

Gerard de Lairesse, in his Groote Schilderboeck, noted that a flower painting specialist should have a well-stocked hortus botanicus[4]. It is not known whether Mignon achieved this, but he was prosperous by the end of his career and his flowers are clearly studied from life. The present bouquet, like so many seventeenth century Dutch paintings, brings together flowers that bloom at different seasons: the tulips and pansy in spring, the roses at midsummer, the poppies tangled with the wheat at harvest time. The bouquet was probably assembled with the help of drawings or watercolours kept in the studio. The same flowers appear in more than one work. For example, a replica of the red-and-white striped tulip to the right of this painting, as well as a similar scabious, can be found in a Still life with flowers in a glass vase of c.1670 (Mauritshuis, The Hague), which was probably a commission from the House of Orange[5].

In the 1670s Mignon was a Deacon in the French Calvinist church in Utrecht, as Marrell had been in Frankfurt, responsible for distributing the bread at Communion and giving alms to the poor, in a church wholly founded on the authority of Scripture[6]. Whether overt or not, it is impossible to ignore the part that these beliefs played in Mignon’s flower painting. The ears of wheat would recall to a seventeenth-century viewer of the bread of the Eucharist, while the butterfly perched at the apex of the painting would remind them of the soul’s flight towards Heaven. The snail on the withering poppy leaf at lower left makes the point that all earthly things decay and that only in Faith could be found eternal life. In addition, the painting encompasses the Four Elements: Earth (the stone niche, flowers and wheat are products of the earth); Fire (the glass vase, blown by fire); Water (in the vase and the exquisitely painted dew-drops) and Air (the insects), together representing God’s Creation.

The artist and art dealer Conraet Roepel (1678-1748), who was much influenced by Mignon, told the German scholar Zacharias von Uffenbach that Mignon was a ‘small, uninviting and ugly man’, though ‘very diligent and virtuous’. By contrast with the man, Roepel showed Uffenbach a painting by Mignon, which was ‘of incomparable beauty’[7]. Such a phrase springs to mind when contemplating this Still life of roses.

Abraham Mignon was born in Frankfurt-am-Main, the son of a cheese merchant and the descendant of Walloon craftsmen who had emigrated from the French-speaking part of the Catholic Southern Netherlands in order to practice their Calvinist faith. Although his parents moved to Wetzlar in 1649, Abraham became a pupil of Jacob Marrell in Frankfurt, probably towards the end of 1650. Marrell brought Mignon to Utrecht on one of his many visits to that city, where he himself had lived in the 1630s and 40s. When this move occurred exactly is uncertain. It is generally assumed it took place around 1664, but it may well have been earlier, perhaps shortly after the death of Mignon’s father in 1660. In 1669 Mignon was registered as a master by the Utrecht guild. He was strongly influenced by Jan Davidsz. de Heem, and worked in that artist’s studio probably from his arrival in Utrecht until de Heem’s departure in 1672; after that, Mignon appears to have taken over the studio. In 1675 he married the granddaughter of the marine painter Adam Willaerts. For several years, from 1672 on, he was a Deacon in the French Reformed Church in Utrecht, where he died in 1679, aged thirty-nine. He was a very prolific painter of flower and fruit pieces, and still lifes of dead birds.

Abraham Mignon apparently did not date any of his paintings and consequently it is quite impossible to establish a firm artistic chronology for his oeuvre, which probably spans no more than a mere fifteen years. In general, it would seem that after de Heem’s departure, Mignon’s style became more graphic and less tonal. His larger, sumptuous and most highly finished still lifes of flowers and of fruit - details of which are hardly discernable from those by de Heem - probably date from the years around 1670, when the artist was working most closely with the great master.

Even during Mignon’s lifetime his works were in great demand. The Elector of Saxony owned thirteen of his paintings which later entered the collection of the Gemäldegalerie in Dresden; his paintings were also acquired by Louis XIV of France. Both Rachel Ruysch (1664-1750) and Coenraet Roepel (1678-1748) were inspired by Mignon’s work.

The work of Abraham Mignon is represented in the Fitzwilliam Museum, Cambridge; the Staatliche Kunsthalle, Karlsruhe; the Ashmolean Museum, Oxford; the Wallraf-Richartz Museum, Cologne; the Louvre, Paris; the Mauritshuis, The Hague; the Uffizi, Florence and the Rijksmuseum, Amsterdam.

[6] I am grateful to Revd. Canon Dr Nicholas Cranfield for his information on the Calvinist church.