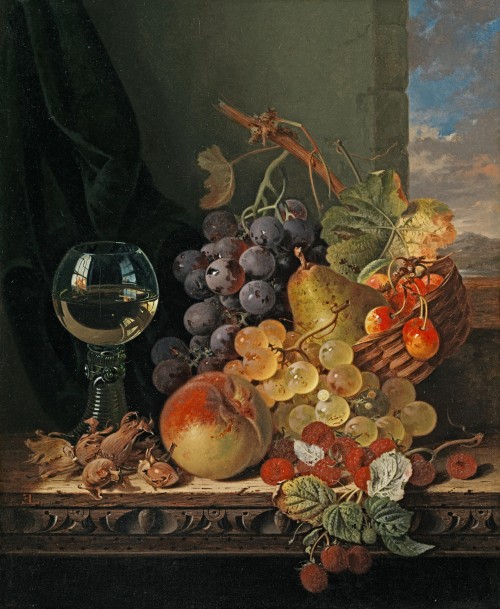 Still life with a basket of fruit, a wine glass and a landscape beyond

Still life with a basket of fruit, a wine glass and a landscape beyond

Edward Ladell followed in the tradition of seventeenth century Netherlandish still life painters, bringing to his theme exquisite attention to detail and clarity of colour. The table-top composition and draped curtain echo baroque motifs, as does the reflection of the studio window in the wine glass, which recalls the roemers found in the work of the Haarlem artists Willem Claesz. Heda (1594-1680) and Pieter Claesz. (1597-1661). The window opening onto an Italianate landscape echoes the landscape backgrounds in the still lifes of a later Dutch master, Jan van Huysum (1682-1749).

Ladell’s obituary in The Essex County Standard considered him ‘the foremost man of his day in fruit painting’. He was entirely self-taught, having initially followed the profession of his father, Christmas Ladell, as a coach builder. A native of Colchester, he married his second wife Ellen Maria Levitt in 1878. He moved to Torquay and later to Exeter, where he took a studio at 20 Queen’s Street. Ladell exhibited at the Royal Academy between 1856 and 1886, and also at the British Institution, the Royal Society of British Artists, Suffolk Street, and local West County venues.

Ladell specialised in still lifes composed of fruit and flowers placed on ornamental boxes, in antique glass and china vases or with bird’s nests. His technique achieved an astonishing degree of realism. His biographer Frank Lewis writes: ‘he paints with the fidelity of an old Dutchman and with the brilliancy of colour all of his own. A dead duck lying upon a board, as represented by Mr. Ladell, is a duck indeed...maybe it’s a branch from a raspberry bush laid carefully down, and while the fruit is round and luscious, over-ripe or scarcely ripe, the leaves whether fresh or fading, are represented with a verisimilitude that is marvellous’.