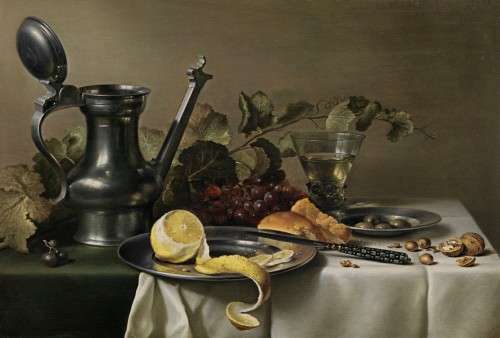 Still life with a pewter jug, a peeled lemon on a pewter plate, bread, a knife, a berkemeyer and vine leaves on a table partly draped with a white cloth

Still life with a pewter jug, a peeled lemon on a pewter plate, bread, a knife, a berkemeyer and vine leaves on a table partly draped with a white cloth

by descent to his great-granddaughter Anny Wafelman-Morpurgo (1931-2019), Amsterdam

This painting is an excellent example of Pieter Claesz.’s work from the 1630s, when he forged his mature style of ‘classical harmony’[2] with a ‘tonal’ approach to still-lifes. Born in Berchem, near Antwerp, Claesz. moved around 1621 to Haarlem, a town where an influx of wealthy Flemish immigrants had brought prosperity to the city from the 1580s. His earliest influences – perhaps his teachers – were the Antwerp painters Osias Beert and Clara Peeters, who produced ‘laid table’ still lifes with a high viewpoint and strong local colours, where exquisitely detailed objects make an individual impact. This tradition was continued by the Haarlem artists Nicolaes Gillis and Floris van Dijck in the first decades of the seventeenth century, and is also apparent in the early work of Claesz.

In Still life with a pewter jug, dated by Martina Brunner-Bulst circa 1632, Claesz. lowers the viewpoint so that there is a more intimate engagement with the composition. Shapes are cleverly interlocked in what seems to be an artless way, but which is in fact highly sophisticated. The oval shape of the lid of the pewter jug is echoed in the cut lemon, and its serpentine handle by the curl of lemon rind. The top left to bottom right diagonal from the jug lid to the lemon rind is balanced by the bottom right to top left diagonal from the rind up the edge of the berkemeyer[3] glass, locking the centre of the composition within a V shape. These harmonious balances are what give the composition its serenity. Claesz. employs a restricted range of colours: pewter grey, soft green for the vine leaves, shadowed cream for the pristine tablecloth, a plain greyish background, tones which create atmosphere by sliding one into the other. The painting is given vivacity by the moist yellow radiance of the lemon, the orange crusts of the bread and by his superb command of light and textures, from the blurred reflections of the pewter jug, with its echo of the studio window, to the pricks of light on the grapes and the hard, shiny texture of the berkemeyer. Still life with a pewter jug revels in the fascination of everyday objects and the mystery of light.

Research by John Michael Montias and Julie Berger Hochstrasser indicates that Pieter Claesz.’s patrons came from Haarlem’s ‘middle-to-wealthy merchant class and that these paintings hung….in the front – or public – spaces of their well-appointed homes’[4]. The objects and food in this painting are refined without being overly luxurious. Such works are defined in contemporary inventories as ontbijtjes (‘breakfast pieces’). In the seventeenth century Netherlands, an ontbijt was an informal meal served around eleven in the morning, from which diners casually helped themselves. Claesz.’s painting has something of this air of informality, of a stage on which the human players have just stepped aside for a minute. The cracked but uneaten walnut, the debris of hazelnuts and the slices of lemon, perhaps about to be used to temper the wine, suggest that the diner is about to return.

Lemons were grown by the wealthy in hothouses or imported from the Mediterranean. They were fairly costly and ‘infrequent additions at most tables’[5]. Likewise, although coarse brown bread was a staple of the Dutch diet, the fine white bread depicted here reinforces the sense of gracious living, something that would have resonated with Claesz.’s clientele. The pewter jug, berkemeyer and finely inlaid knife appear in several other of Claesz.’s still lifes from the 1630s, for example the Still life with a fruit pie, pewter jug and berkemeyer (private collection) which is signed and dated 1632 PC on the knife handle[6].

How much allegorical meaning there is in Claesz.’s still lifes is a matter of scholarly debate. In a highly religious age, the juxtaposition of bread, wine, grapes and vine leaves would have called to mind the bread and wine of the Eucharist and Christ’s statement ‘I am the true vine’ (John 15:1). Beyond the pleasures of the table and the artist’s delight in evoking the fruits of the earth and the light which plays across them, there is the sense of a life well lived, with morality and moderation.

This painting was in the collection of the well-known Amsterdam antique dealer Joseph M Morpurgo, probably acquired, as his great-granddaughter explained in a letter of 2002 to Dr Martina Brunner-Bulst, in the first quarter of the twentieth century. Joseph Morpurgo founded his business in 1869 on the Oude Hoogstraat, selling antique silver and jewellery. His son Louis, an artist and interior decorator, added high-quality furniture, Chinese porcelain and Delftware to the gallery’s stock, attracting clients across Europe and America. Louis’s son Lion (1900-1957) was a founder of the Delft Fine Art and Antique Fair, revered for his knowledge of a broad range of decorative arts. The Pieter Claesz. was inherited by his daughter Anny Wafelman-Morpurgo (1931-2019), the fourth generation of the family to direct this distinguished firm.

Until the Second World War, the Morpurgos had a stock of about thirty to forty seventeenth-century Dutch Old Masters. With the onset of the War, Lion Morpurgo sent some of his finest Chinese porcelain, glass and some of the Old Masters to London for safekeeping. Much of the rest of his stock and collection was hidden in Baron de Vos van Steenwijk’s Schloss Windesheim in Overijssel. The castle was hit by a misfiring V2 rocket in 1944 and the artworks were destroyed. The Pieter Claesz. still life returned from London at the end of the War and was a treasured possession of Lion’s daughter Anny.

Pieter Claesz. (Pieter Claeszoon, Pieter Claessen) was born about 1597 in Berchem, a village near Antwerp, and died in 1660 towards the end of December in Haarlem. He was buried on 1st January 1661 in the graveyard of the Nieuwe Kerk in Haarlem. It is likely that he received his training as a painter in Antwerp with Osias Beert and Clara Peeters, whose style he appeared to follow in his early works. Around 1620/22 he moved to Haarlem, where he seems to have received inspiration from Floris van Dijck and the members of the copper engravers’ family Matham. His son Claes, born in 1622 in Haarlem, was later a successful painter of Italianate landscapes, and took as his surname the birthplace of his father (Nicolaes Pieterszoon Berchem).  The name of Pieter Claesz.’s wife, who gave birth to two girls as well as Nicolaes, is unknown.  After the death of his first wife, in 1635 the painter remarried, and twin girls were born of this marriage; when they were twelve, after the death of their father, who had obviously been widowed a second time, they entered the orphanage in Haarlem.

Over a period of about forty years - between 1621 and 1660 - Pieter Claesz. produced some 270 pictures, with a few exceptions all signed with his monogram and in the main nearly all dated.  His still-lifes, filled with light and lustre, ensure his place among the best in his profession in Holland in the seventeenth century.

[1] Provenance confirmed in a letter from Anny Wafelman-Morpurgo to Dr Martina Brunner-Bulst, 26th February 2002. We are grateful to Dr Brunner-Bulst for bringing this letter to our attention.

[3] A berkemeyer is a drinking glass with a wide, flared bowl, common in the Netherlands and Germany throughout the sixteenth and seventeenth centuries. The shape derived from cups carved from birch tree branches (berkemei), the prunts on the stem echoing the textured bark.