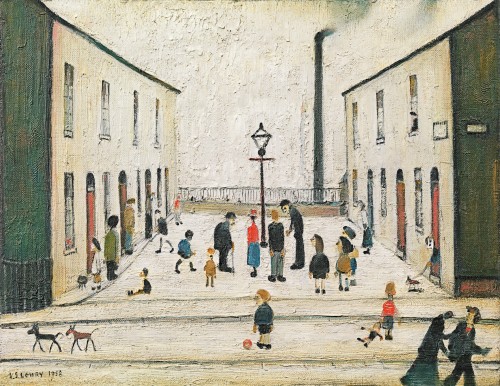 Signed and dated lower left: L.S. Lowry 1958; inscribed and dated on the stretcher and overlap: Street in Salford 58

In a black and gold Nicholson style frame

private collection, UK, 1992, inherited from the above

This joyful, beautifully balanced street scene is based on Francis Terrace, Salford, built in the 1850s on the east side of the River Irwell and demolished in 1959, a year after it was painted. The area was in desperate need of redevelopment in the aftermath of the Second World War and the deprivation of the local population. Before it was destroyed, Lowry was commissioned by the Curator of Salford Art Gallery, Ted Frape, to record streets in the neighbourhood of the museum.[1] Richard Mayson writes, ‘the street obviously captured Lowry’s imagination, as he made a number of images of it, both drawings and an oil painting on canvas. His drawing Francis Terrace (1956) was almost certainly developed from a sketch made in situ but it illustrates Lowry’s considerable capacity for artistic licence. The scene is recognisable from contemporary photographs and the leaning, decapitated lamp standard, the railings at the end of the street and the fall of the land are all topographically accurate. However, in reality the lamppost was located just off-centre and Lowry chose to move it to the middle of the street…In the background Lowry decided to enhance the industrial setting by adding a tall mill chimney.’[2]

Both the drawing of 1956, in the collection of The Lowry, Salford, and the slightly larger oil painting, Francis Street, Salford, 1957 (15 ¾ x 19 ½ in), in the collection of Newport Museum & Art Gallery, feature the decapitated lamppost visible in a contemporary photograph of the street. In the present work, Lowry replaces the dilapidated post at the heart of this tight-knit community, its centrality drawing us straight into the celebratory scene in which neighbours gossip, children play and dogs often walk themselves. The cul-de-sac of twinned ‘two-up, two-down’ terraces provides a wonderful set for Lowry’s delightful human drama, with fantastic characters entering from doorways on both sides like the wings of a stage. Sir Ian McKellen, whose lifelong passion for Lowry led him to make a documentary on the artist, suggests looking at Lowry’s pictures as if they were behind a proscenium, the lines in the foreground representing the front edge of the stage.[3]

Sir Hugh Casson, in his preface to the 1976 Royal Academy Memorial exhibition, referred to L S Lowry as ‘one of the great English painters of this century.’ An individual artist with a unique style, Lowry’s work spans the first half of the twentieth century, recording with sensitivity and wit his own personal view of the people and architecture of the industrial north.

By 1920 Lowry’s street scenes, peopled with workers, housewives and children set against a backdrop of industrial buildings and terraced houses, had become central to his highly personal style. From now on he painted entirely from experience and believed that you should ‘paint the place you know.’ His leisure time was spent walking the streets of Manchester and Salford making pencil sketches on scraps of paper and the backs of used envelopes, recording anything that could be used in his work. In his early factory scenes the emphasis is placed on the buildings and the atmosphere was often dark and sombre; however, as he developed this theme the figures became more prominent and eventually he arrived at a marriage between the two where the figures and surroundings form a whole.

By the 1930s Lowry had established his own particular style. He was encouraged by his teacher Bernard Taylor to try to make his figures and buildings stand out more and he began to experiment with setting them against a white background. He chose ‘flake white,’ building up layer after layer on the canvas before painting the subject matter straight on top. He used only four other colours: vermilion, Prussian blue, ivory black and ochre, which he applied straight from the tube.

With the onset of the modernisation of the industrial north in the mid-1950s Lowry lost interest in his surroundings and now concentrated almost entirely on figures silhouetted against a white background, occasionally standing on a hint of a pavement or near a ghost of a wall, but frequently suspended in time and space. He continued to sketch and closely observe his subjects and his works from this period capture the essence of Northern people; he frequently mixes young and old and he imparts to each figure an individual character. Shelley Rohde in A private view of L S Lowry comments: ‘he had a new obsession, his single figures, his grotesques. The struggling, surging, misshapen homunculi who used to live for so long in the shadow of the mills emerging at last from their background to stand alone, as he stood alone’. 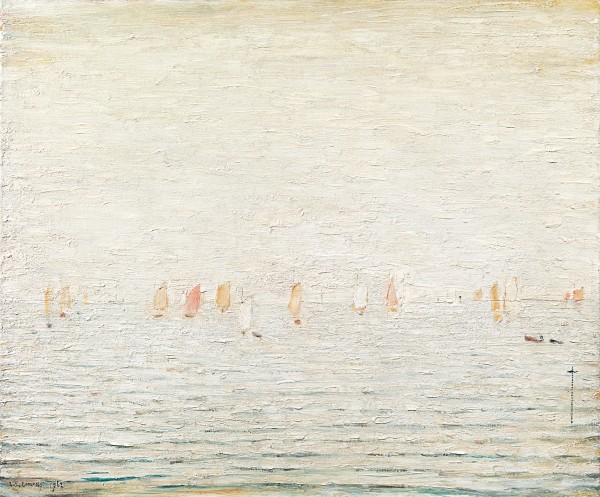 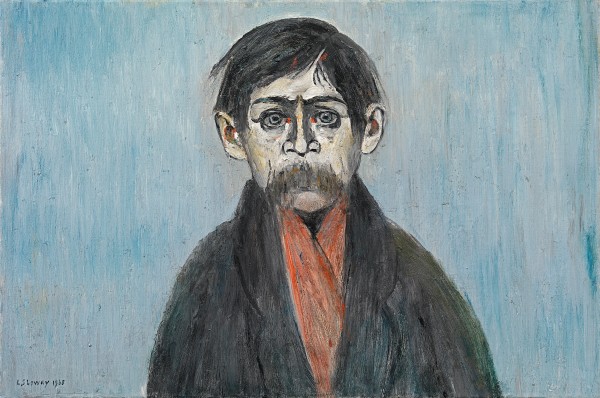 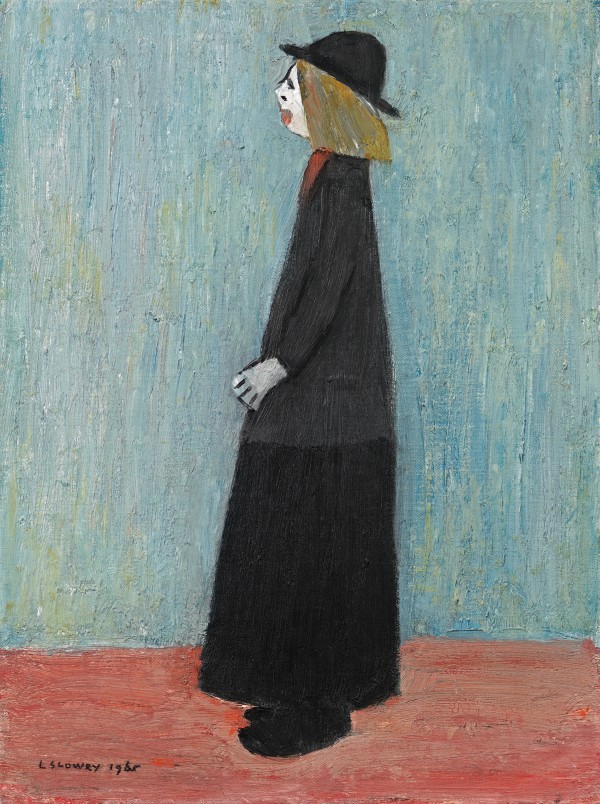 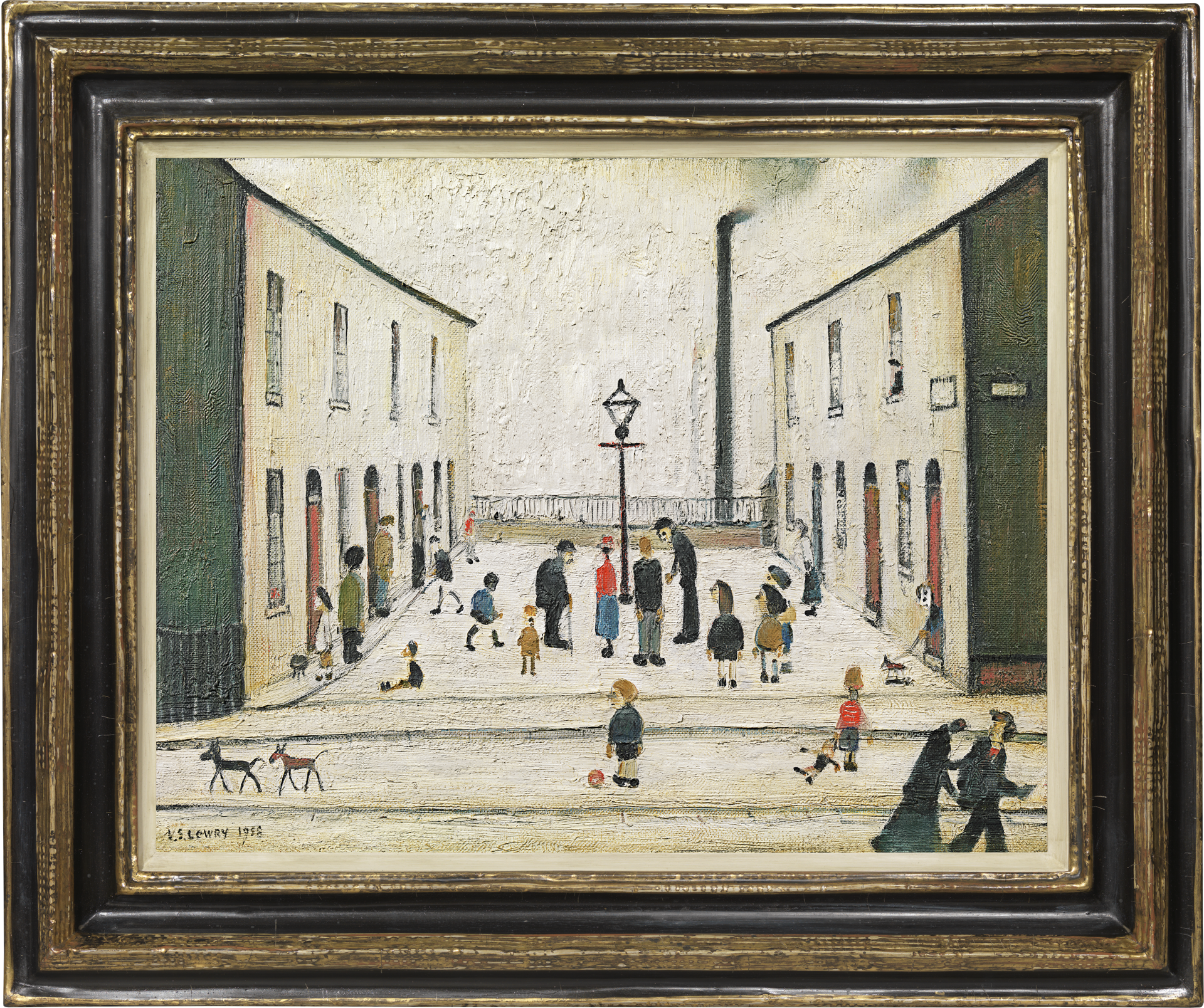