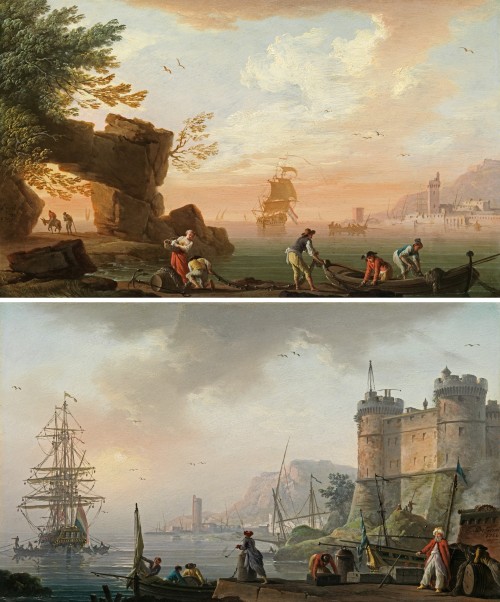 Sunrise: Levantine merchants on a quay below a castle, a Dutch man-of-war at anchor beyond

Sunset: fishermen preparing their nets, a port and a Dutch man-of-war beyond

A pair, the former signed lower right: De Lacroix / 1766 and inscribed R / W / FA on the packages and barrels;

Lacroix de Marseille was strongly influenced by the paintings of Claude-Joseph Vernet (1714-1789), whom he encountered in Rome in the 1750s. Like Vernet, he often executed landscapes in pairs which evoke the atmosphere of different times of day, typically sunrises and sunsets. This pair of paintings on copper is a fine example of his accomplished and decorative work with its clear, delicate colouring. The copper support provides a smooth surface which enhances Lacroix’s exquisite brushwork, seen in the modulations of the clouds and in the picturesque, elegant figures. Lacroix may have been born in the brutal, bustling port of Marseilles, but his views are of an idealized Mediterranean, perfect souvenirs for Grand Tourists remembering its glorious light in chillier, greyer northern Europe.

In Sunrise, a Dutch man-of-war lies at anchor, irradiated by the dewy haze, as she takes on stores in the flat calm. In the foreground, a boat prepares to ferry barrels and chests across, idly watched by two Levantine merchants. These turbanned figures are a staple of Claude-Joseph Vernet’s port scenes, as well as Venetian vedute by Carlevarijs and Canaletto: they serve as a reminder of the rich cultural mix of the Mediterranean trade routes. Towering behind them is a massive fortress reminiscent of Castel Nuovo in Naples, remodelled by the Spanish rulers of the city in 1479. Based in Rome from 1754 to the 1770s, Lacroix visited Naples in 1757. Both Rome and Naples (the second-largest city in Europe by the seventeenth century) were essential stops on the Grand Tour.

The companion work, Sunset, is flushed with hues of apricot, pink and gold, as the sun declines behind a natural rock arch, lighting up a magnificent spiral of clouds. Fishermen prepare nets for the evening’s labour. In the offing, the breeze that blows fitfully at sunset fills the sails of another Dutch man-of-war and sets streaming its long commissioning pennant. The rocky coastline to the right is surmounted by a castle not unlike the Castel Sant’Elmo which guards the Bay of Naples.

Charles François Grenier de Lacroix, known as Lacroix de Marseille, established his reputation as a painter of Italianate seascapes and landscapes. He specialised in capricci embellished with figures and distinguished by a taste for fantastic architecture. Despite his success during his lifetime, comparatively little is known about him. He used a number of different signatures, signing himself Grenier de La Croix on a Port scene dated 1750 (Toledo Museum of Art, OH) and using Delacroix on an Eruption of Vesuvius of 1767.

Born in Marseille, Lacroix’s first known paintings were two pendant seascapes signed and dated 1743, entitled Italian port at sunrise and Italian port at sunset. By 1754, he had moved to Rome. He visited Naples in 1757, painting Vesuvius and the surrounding countryside. In Rome, Lacroix met Adrien Manglard (1695-1760), the celebrated sea painter from Lyon, and his pupil Joseph Vernet (1714-1789), who was to become the most important influence on Lacroix's work. Lacroix painted seascapes, seaports, storms and sunsets which both in subject and style show his debt to Vernet. His capricci, particularly his depiction of figures, also reflect the influence of Italian artists such as Francesco Zuccarelli (1702-1788) and Marco Ricci (1676-1729/30).

Lacroix was in Paris by the end of the 1770s and exhibited at the Salon du Colisée in 1776. He participated in the Salon de la Correspondance in Paris in 1780 and 1782, and died in Berlin in 1782. During the eighteenth century his paintings were very popular and many were engraved by Le Veau and Le Mire. 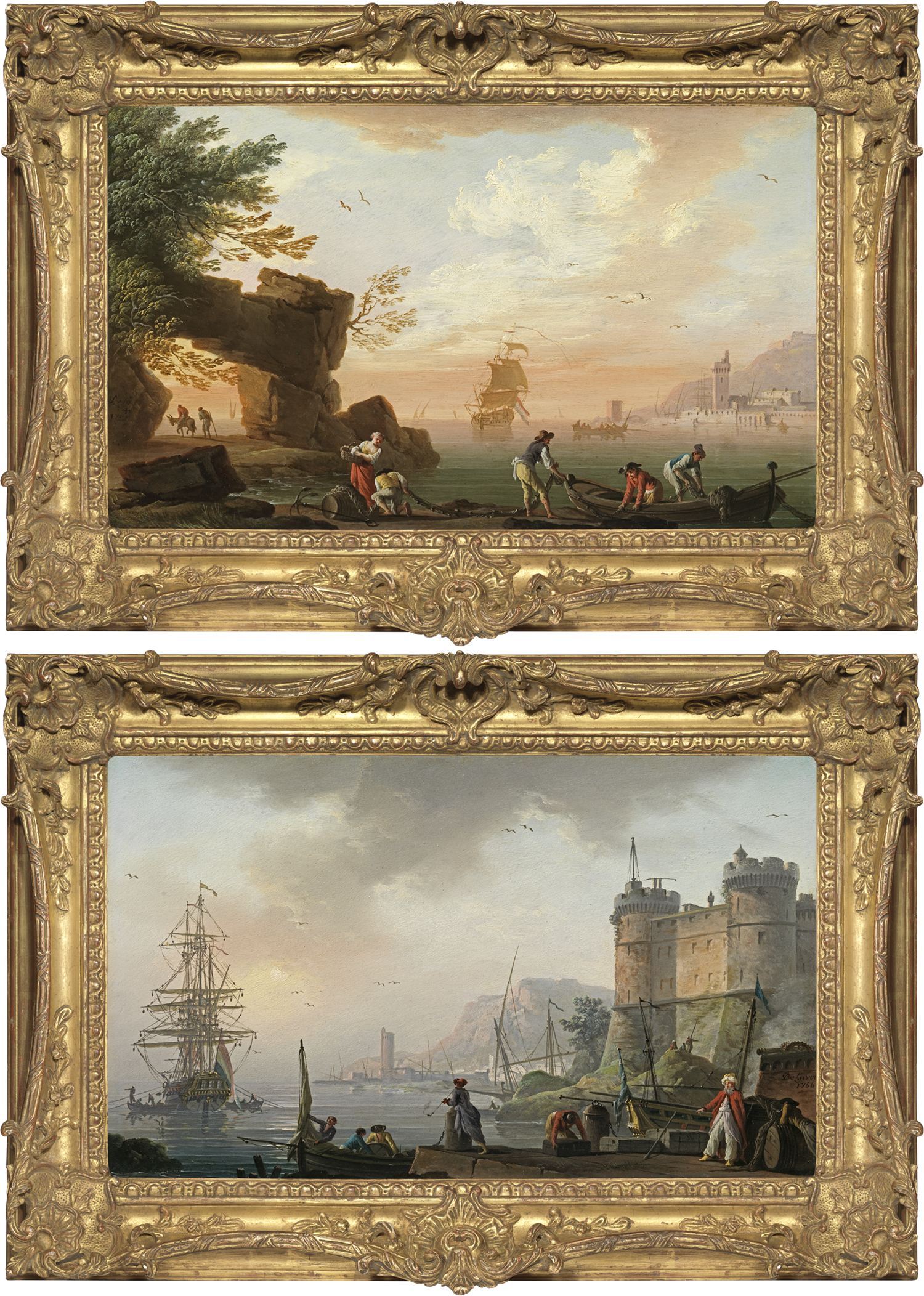