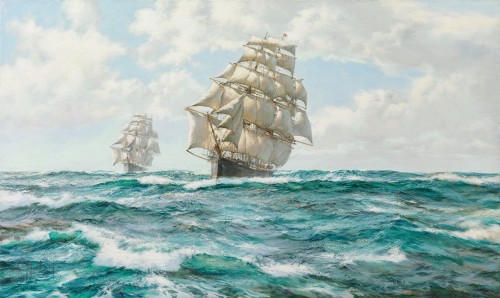 Surging Forward: The Race between the Clipper Ships 'Lightening' and 'Red Jacket' across the Atlantic in 1854

Surging Forward: The Race between the Clipper Ships 'Lightening' and 'Red Jacket' across the Atlantic in 1854

Montague Dawson was fascinated by the towering grace of the mid-nineteenth century clipper ships, which inspired some of his most celebrated works. Races between clippers, such as the competitions to bring the new season’s cargo of tea from China to London, caused much excitement, with wagers, announcements in the press, and a hero’s welcome for the winning Captain.

This painting depicts an informal race across the Atlantic between Lightening and Red Jacket in 1854. Lightening sailed from Boston for Liverpool on 18th February, while Red Jacket sailed from New York the following day. The two ships arrived in Liverpool on 4th March, Red Jacket making better time by eighteen hours. Dawson shows the two ships in mid-Atlantic, cracking on with all sails set in a heavy swell, Lightening in the foreground wearing the house flag of the Black Ball Line. The low viewpoint and richly-impasted, deep green sea, adds to the sense of drama and peril.

Lightening was built by the legendary Donald McKay, arguably the finest clipper designer of the nineteenth century, for James Baines of the Liverpool company, the Black Ball Line. Launched in 1854, during the Australian gold rush, she was intended to be both speedy and stable, able to withstand the huge seas and storms of the Australia run. Lightening cost £30,000 to build and Baines lavished a further £2,000 on interior decoration, with staterooms of exotic wood, marble, gilding and stained glass. She could reach speeds of nearly twenty knots. In 1854-55, Lightening made the passage from Melbourne to Liverpool in sixty-five days. In 1869, loaded with a cargo of wool and copper, she caught fire at Geelong in Australia and was scuttled in Corio Bay.

Red Jacket was 2,305 tons to Lightening’s 2,084. She was designed by Samuel Hartt Pook and built by George Thomas in Rockland, Maine. Launched in 1853, she was named after the Seneca Indian chief Sagoyewatha, named ‘Red Jacket’ by settlers. She set a record for an Atlantic crossing by making the journey from New York to Liverpool in thirteen days, 1 hour, twenty-five minutes. In 1854 Red Jacket was bought by Pilkington & Wilcox of Liverpool and chartered by the White Star Line for a run to Melbourne, making the journey in sixty-nine days. Red Jacket served the Australian immigrant trade until 1867, and ended her days in 1885 as a coaling hulk in Madeira. 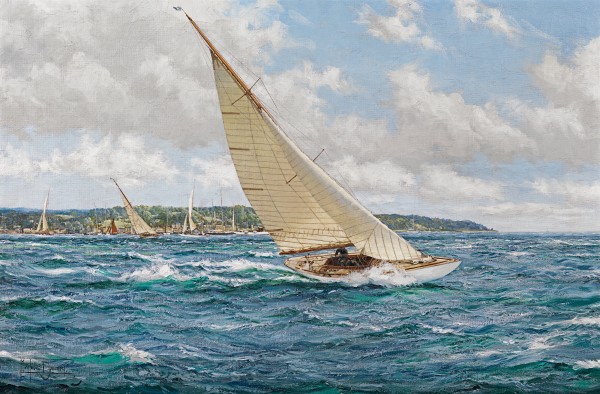 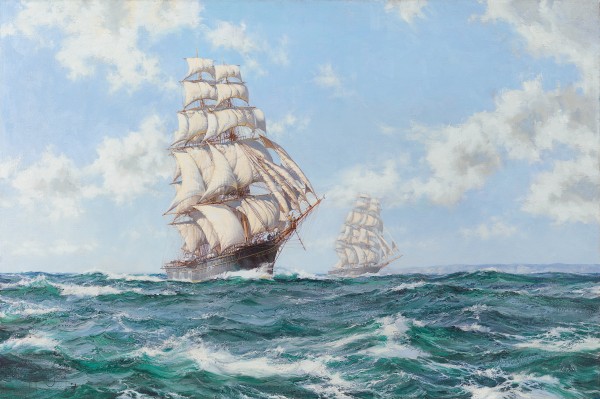