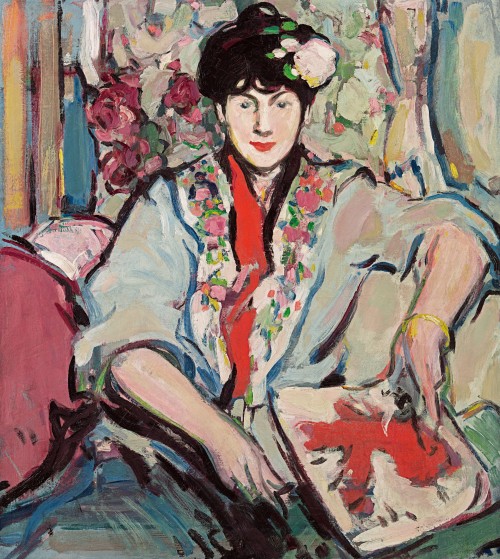 Signed, dated and inscribed on the reverse: The Chinese Coat / JD Fergusson / PARIS 1908

Margaret Morris, The art of JD Fergusson: a biased biography, Blackie, Glasgow and London, 1974, p.46, visible in a photograph of Fergusson in his Paris studio

A strikingly glamourous work of art, The Chinese coat, 1908, by John Duncan Fergusson captures the spontaneity and dynamism of art and fashion in Paris at the dawn of the twentieth century. The painting, exhibited at Fergusson’s first retrospective in 1948, can be seen in two formal photographs of the artist in his Paris studio at 18 Boulevard Edgar Quinet dating c.1910, suggesting its importance at this pivotal moment in his career, representing his recent and most successful work. The stunning light blue silk robe sets the palette for the painting; in colour and form the bold reds, pinks, greens, blues and bright yellow decorating the white embroidered collar or panel, are continued in the model’s hair adornment and floral backdrop beyond, as if the garment were an extension or embodiment of the vivacious sitter. The pale pink and blue tones of the loose-fitting coat are also echoed in the cool studio setting, as well as the sitter’s ‘light periwinkle eyes.’[1] The unstructured, flowing use of opulent fabric, vivid colour and lavish embroidery were characteristic of the couturier Paul Poiret (1879-1944), whose approach to design was inspired by the reductive planarity of eastern garments such as the kimono. While at the House of Worth, Poiret’s radical change of silhouette and use of Chinese-style embroidery was revolutionary and became the model for his ground-breaking ‘Confucius’ coat (originally ‘Révérend’) of 1905.[2] Fergusson returned to the subject in 1909 in a full-length study of the same title, Le manteau chinois, The Fergusson Gallery, Perth & Kinross Council, depicting a garment similar in form to Poiret’s celebrated ‘Confucius’ coat, with wide sleeves and embroidered Chinese medallions, and exhibited another work entitled Chinese embroidery at his Doré Gallery exhibition c.1914.

An alluring and assertive masterpiece documenting Modernism’s enchantment with the East, The Chinese coat is also a powerful portrait of Fergusson’s lover and muse, Anne Estelle Rice (1877-1959). Fergusson met Rice at Paris-Plage in 1907, an encounter which contributed to his departing Edinburgh, their creative and personal relationship lasting six years in pre-war Paris. A strong, charismatic character, like Fergusson, Rice was born in Pennsylvania, completing an art degree in 1897 despite parental disapproval, and worked as an illustrator for publications such as Harper’s Bazaar before being sent to Paris in 1905 by the department store owner, Rodman Wanamaker, to illustrate the latest fashions with her colleague Elizabeth Dryden for The North American.[3] Without mentioning her by name, Margaret Morris records the artists’ meeting in her ‘biased biography’ of Fergusson: ‘She was already a successful book illustrator, but at her art school had been told that she would never become a painter in oils. She was coming to Paris to do sketches of the top dressmakers’ spring collections. Fergus said she must start painting in oils, and that he would make her a first class painter which he did. She rented a studio and for eight years lived and worked in Paris. Her pictures were well hung in big Paris exhibitions and often sold. Later she had success in America and London.’[4]

With their innate artistic flair, sensual response to the world and shared interest in the female form, Rice and Fergusson’s relationship was that of equals, more reciprocal and mutually beneficial than Morris might suggest. Elizabeth Cumming writes that Rice’s established style of drawing for publication, ‘heavily contoured with ‘simplification of interior detail and shading’…began to give Fergusson’s art a more expressionist edge.’[5] Kenneth McConkey suggests that her Danseuses Égyptiennes, hailed at the Salon d’Automne of 1910, ‘may have acted as inspiration for Fergusson’s transition to grand processional friezes like Les Eus.’[6] Rice’s connection with Wannamaker seems to have benefitted Fergusson, who drew a salary to create designs and posters for John Wannamaker’s trade magazine, enabling him to buy new painting materials, and Fergusson later reciprocated by commissioning Rice as Art Editor of the journal Rhythm, 1911-13, to which she contributed an article on the debut of the Ballet Russes as well as several drawings.[7] Rice’s Self-portrait, c.1909-10 (private collection) and mural paintings for the Wannamaker store, commissioned in 1908 (now lost), featured decorative, floral backdrops, as did her portrait of the writer Katherine Mansfield, painted in 1918, Museum of New Zealand.

Fergusson frequently painted Rice between 1907 and 1909 (the majority in public collections),[8] his beguiling depictions of her documenting his stylistic development from belle époque portraiture, in Hat with bird: Anne Estelle Rice (Kelvingrove Art Gallery & Museum, Glasgow), to the broken brushstrokes and bold green shadows of Fauvism, in Anne Estelle Rice, Closerie des Lilas (Hunterian Art Gallery, Glasgow). The dynamic use of colour, bold outlining of form and flat, decorative style characteristic of Fauvist portraiture can also be seen in The Chinese coat, which, like Fergusson’s Le manteau chinois, Kenneth McConkey asserts ‘successfully vied with Van Dongen and the portraits by Marquet and Camoin of Mme Matisse in a kimono.’[9] Immersed in the artistic and social life of Paris at a critical moment in the development of modern art, Fergusson came into contact with many important contemporary painters, including Picasso, but it was Matisse and the artists labelled Les Fauves at the sensational Salon d’Automne of 1905, whose work had the greatest influence on him. Fergusson’s direct involvement in the modern art scene saw him exhibiting alongside the progressive avant-garde at the Salon d’Automne months after moving to Paris in 1907 and just two years later he was elected Sociétaire. Rice began exhibiting in 1908 and was elected Sociétaire in 1910.

Exemplifying Fergusson’s love of colour and rhythmic line, The Chinese coat is an exceptional portrait of a kindred spirit and contemporary, as well as a tour de force of stylish and assured femininity, painted at the height of his powers. Occupying almost the height of the canvas, Rice directly confronts the viewer, her head and torso graphically drawn with rhythmic black lines from her rose-embellished hair to her long, elegant fingers holding what appears to be a fashion magazine, the curves of her silhouette echoed in her decorative surroundings. The surface of the pale blue silk coat seems to undulate in the light of the artist’s studio, picking up the flesh tones of the sitter and merging with the draped fabric framing the window, its loose form calligraphically shaped with tapering black and teal lines across the shoulders and down towards the waist. The cool blue/greens which deepen in the foreground and punctuate the patterns beyond, beautifully contrast the rich red roses behind the model and in the embroidery of her wide white collar, in her bold lipstick and dramatic scarf. Despite the sitter’s seated pose, Fergusson creates a wonderful sense of movement in the application of paint and rhythm of line as he records his personal response to his favourite subject.

John Duncan Fergusson was the fourth and most independent member of the group of Scottish Colourists. Intellectually more receptive to the artistic ideas he encountered in Paris, he evolved a distinctive style of his own. Having embarked on a medical career, Fergusson never matriculated and gave up in order to devote himself to art. He first visited Paris in the mid-1890s and attended classes at the Académie Colorossi. During this period he was impressed by the works of Richard Parkes Bonington (1802-1828) in the Louvre and the Impressionists in the Salle Caillebotte in the Musée du Luxembourg. He visited Morocco in 1899 and Spain in 1901, the year in which he became a member of the Royal Society of British Artists.

Fergusson held his first one-man exhibition at the Baillie Gallery, London in 1905 and settled in Paris two years later, where he befriended the Anglo-American circle of artists.  He was greatly influenced by Henri Matisse (1869-1954) and the Fauves which resulted in the brightening of his palette and a new boldness of line. From 1910 onwards, a new theme dominated his work, that of the female nude in pictures characterised by their rich colouring and rhythmic, geometric patterning. One of these works, entitled Rhythm, gave rise to a literary magazine of the same title, of which he became editor in 1911. He met Margaret Morris, his future wife in 1913, and visited Cassis with Peploe the same year.

At the outbreak of the First World War, Fergusson returned to London; he was appointed a War Artist with the Royal Navy in 1918 and painted a series of Portsmouth Docks. He held two exhibitions in New York in 1926 and 1928 and returned to Paris in 1929, where he remained until the outbreak of the Second World War. Fergusson moved back to Glasgow in 1940 where he founded the New Art Club, out of which emerged the New Scottish Group in 1942. His first retrospective exhibition was held at the McLellan Galleries in 1948, and he was made an honorary LL.D. of the University of Glasgow in 1950.

[4] Margaret Morris, The art of J.D. Fergusson: a biased biography, op. cit., pp.55-56; ‘This was the life I had always wanted and often talked about. We were a very happy group: Anne Rice, Jo Davidson, Harry and Bill McColl, Yvonne and Louis de Kerstratt, Roffy the poet, La Torrie, mathematician and aviator.’ p.46 from Fergusson’s ‘Memories of Peploe’ in the Scottish Art Review. 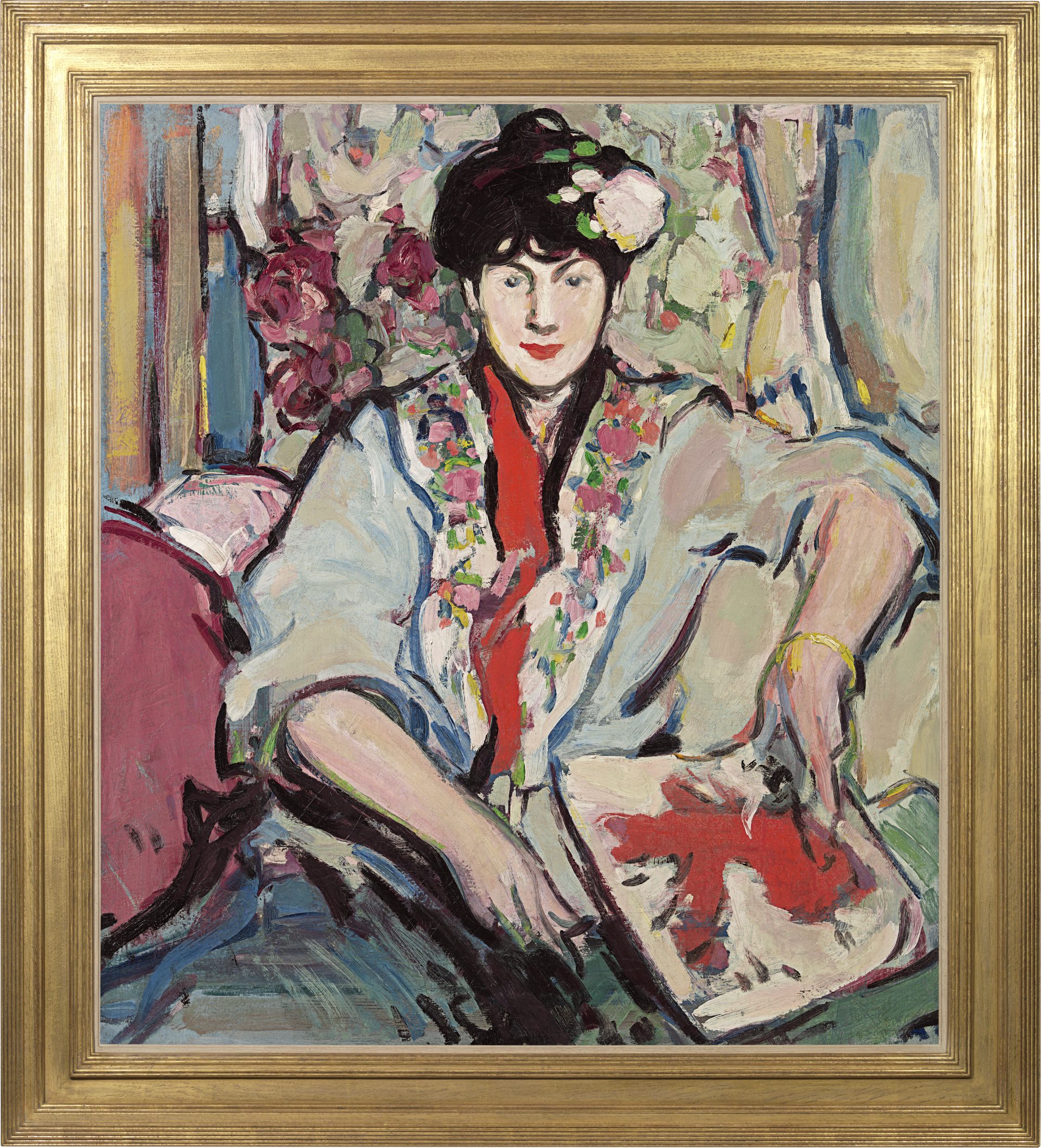