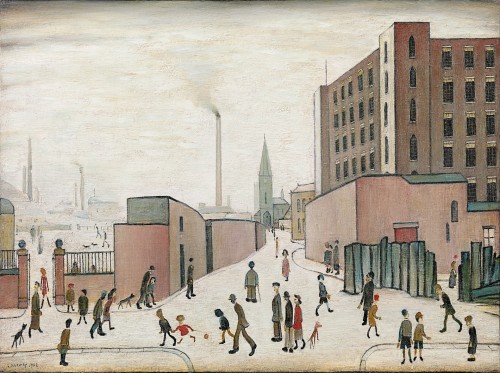 Manchester, Whitworth Art Gallery, Painting and drawings from nine private collections, belonging to Friends of the Whitworth, February-March 1965, no.82

The cross-roads, exhibited at the Royal Academy of 1954, is a superb example of Lowry’s iconic urban landscapes from the beginning of the 1950s, illustrating the importance of the relationship between architecture and character, the unique atmosphere a town possesses. A classic illustration of his industrial subject matter and style, The cross-roads opens wide an environment framed by factories, allowing for the ebb and flow of animated figures, full of energy and intent, leading the eye through the composition with touches of vermillion, ochre and black. During an interview Lowry once said ‘I was fascinated by the buildings. I had never seen anything like them before, but I was fascinated by the people who lived and worked in them. A country landscape is fine without people, but an industrial set without people is an empty shell.’[1]

The titular crossroads defines the division of the painting’s compositional space, its four points taking a central position as the intersecting roadways stretch out into the further reaches of the town. In the spaces behind the communal hub the crossroads provides, a wider industrial mural is constructed against the pale grey sky, smoking chimneys and factory towers, solid rust-red brick warehouses and the unmistakable form of a church in the distance; an established architectural presence. Michael Howard describes how Lowry devised his urban pictorial spaces ‘into a hierarchical sequencing of mill, dwellings and people.’ [2] In The cross-roads, the three compositional elements coexist, receding into one another to produce a lively, candid scene.

In 1952, the year he painted the present work, Lowry retired on a full pension from The Pall Mall Property Company Ltd, Manchester, for whom he had worked as a rent collector and clerk since 1910. In 1951 a retrospective of his work had been held at the City Art Gallery, Salford.

Sir Hugh Casson, in his preface to the 1976 Royal Academy Memorial exhibition referred to L S Lowry as ‘one of the great English painters of this century’. An individual artist with a unique style, Lowry’s work spans the first half of the twentieth century recording with sensitivity and wit his own personal view of the people and architecture of the industrial north.

Born in Manchester in 1887 Laurence Stephen Lowry was the only child of Robert and Elizabeth Lowry. He started drawing at the age of eight and in 1903, he began private painting classes which marked the start of a part-time education in art that was to continue for twenty years. In 1904, aged 16, he left school and secured a job as a clerk in a chartered accountants firm, he remained in full time employment until his retirement at the age of 65. His desire to be considered a serious artist led him to keep his professional and artistic life completely separate and it was not disclosed until after his death that he had worked for most of his life. His early training was at the Municipal College of Art, Manchester, where he was taught by the French artist Adolphe Valette who introduced him to Impressionism and of whom he said ‘I owe so much to him for it was he who first showed me good drawings by the great masters… he gave me the feeling that life drawing was a very wonderful thing.’ Lowry was, however, unaffected by Valette’s impressionist technique and continued to develop a more realistic approach to his art.

In 1909 Lowry and his parents moved to Pendlebury, where initially he was not happy, and for some years ignored his surroundings. In 1916, whilst waiting for a train, he became fascinated by the workers leaving the Acme Spinning Company Mill; the combination of the people and the surroundings were a revelation to him and marked the turning point in his artistic career. He now began to explore the industrial areas of South Lancashire and discovered a wealth of inspiration, remarking ‘My subjects were all around me … in those days there were mills and collieries all around Pendlebury. The people who work there were passing morning and night.   All my material was on my doorstep.’

By 1920 Lowry’s street scenes, peopled with workers, housewives and children set against a backdrop of industrial buildings and terraced houses had become central to his highly personal style. From now on he painted entirely from experience and believed that you should ‘paint the place you know’. His leisure time was spent walking the streets of Manchester and Salford making pencil sketches on scraps of paper and the backs of used envelopes recording anything that could be used in his work. In his early factory scenes the emphasis is placed on the buildings and the atmosphere was often dark and sombre, however, as he developed this theme the figures became more prominent and eventually he arrived at a marriage between the two where the figures and surrounding from a whole.

By the 1930s he had established his own particular style, he was encouraged by his teacher Bernard Taylor to try to make his figures and buildings stand out more and he began to experiment with setting them against a white  background. He chose ‘flake white’ building up layer after layer on the canvas before painting the subject matter straight on top. He used only four other colours: vermillion, prussian blue, ivory black and ochre which he applied straight from the tube.

With the onset of the modernisation of the industrial north in the mid-1950s Lowry lost interest in his surroundings and now concentrated almost entirely on figures silhouetted against a white background, occasionally standing on a hint of a pavement or near a ghost of a wall, but frequently suspended in time and space. He continued to sketch and closely observe his subjects and his works form this period capture the essence and nature of the Northern people; he frequently mixes young and old and he imparts to each figures an individual character. Shelly Rohde in her book A private view of L S Lowry wrote ‘he had a new obsession, his single figures, his grotesques. The struggling, surging, misshapen homunculi who used to live for so long in the shadow of the mills emerging at last from their background to stand alone, as he stood alone…’

Visits to Wales in the 1960s with his friend and patron Monty Bloom briefly revived his interest in industrial scenes. He was impressed by the contrast between the industrial towns and the surrounding countryside, consequently his paintings from this period are brighter than his Lancashire paintings. However, towards the end of the 1960s Lowry began to lose his creative urge and, with the exception of the occasional moment of artistic inspiration he ceased painting almost entirely.

Laurence Stephen Lowry died of pneumonia in 1976, aged 88.  Although he had received critical acclaim for his work during the second half of his life, he never forgot the lack of recognition that he had received initially and he carried with him the feeling of isolation and rejection throughout his career. He refused the offer of a knighthood, as well as numerous other honours, and remained disillusioned with the art world despite the praise that was often heaped upon him.

Lowry is always remembered as a man of remarkable resilience and sensitivity; he stood alone, unaffected by the influences of other artist’s and his inspiration came entirely from his own experience. His paintings and drawings are now included in most important private and public collections in the United Kingdom and abroad and his unique works continue to receive the critical acclaim that he so richly deserves. 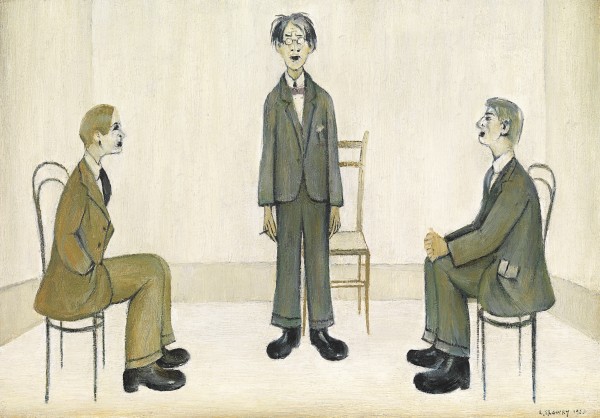 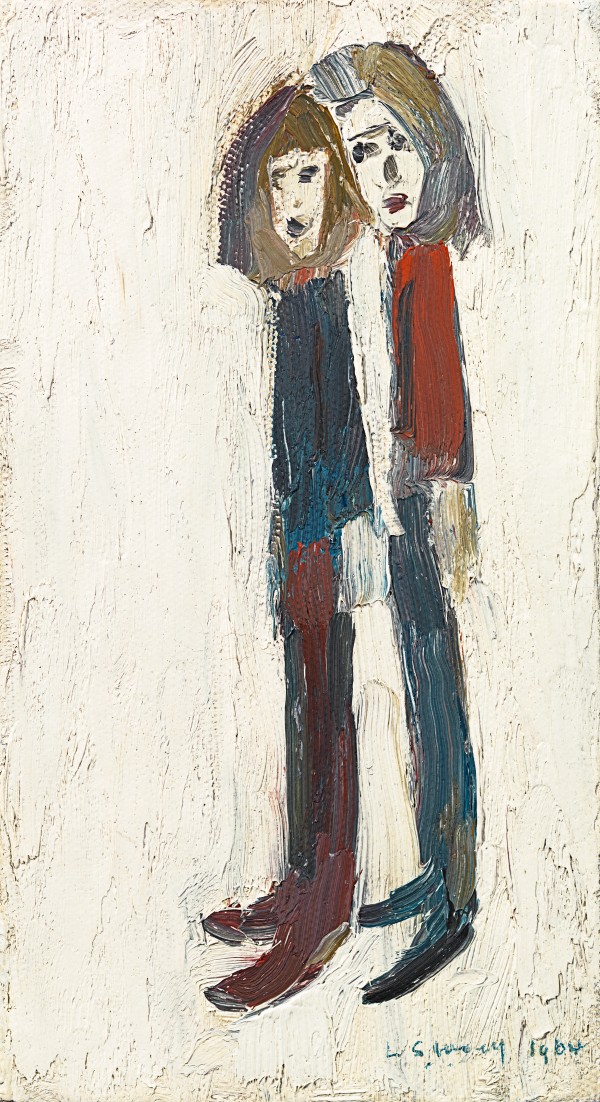 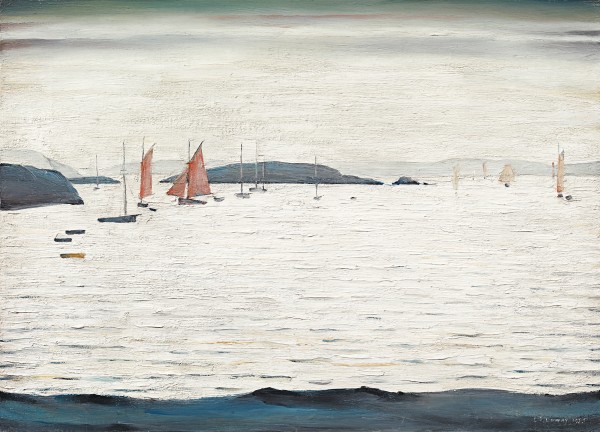 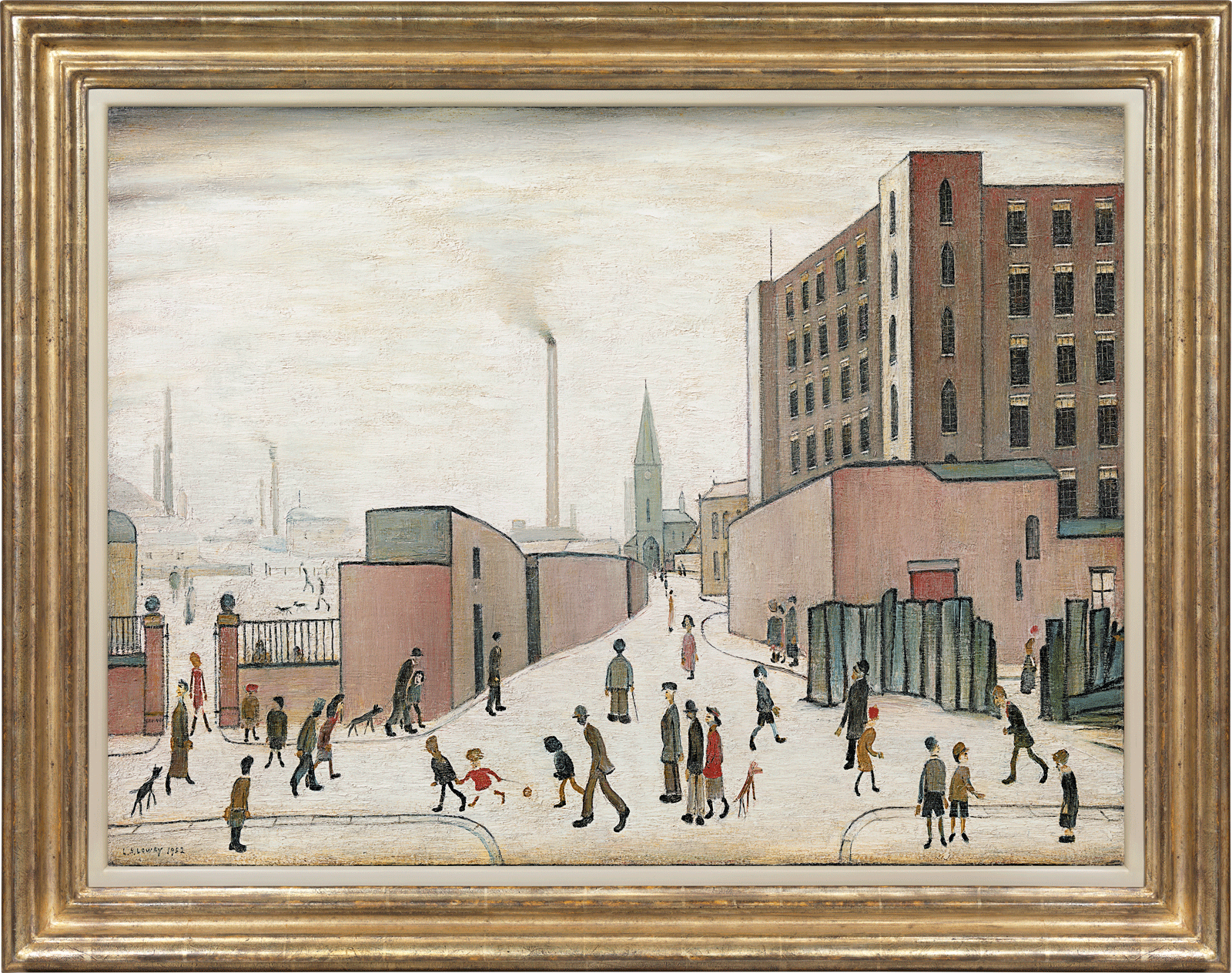