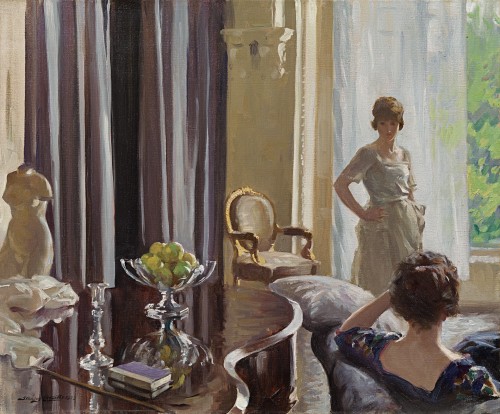 ‘The outstanding features of the art of Mr Stanley Cursiter are its vitality and sincerity.’[1] Though written two years before the present work was panited, Mr Eddington’s article on ‘The Paintings and Lithographs of Stanley Cursiter’ in The Studio feels entirely contemporary and shows great prescience on the part of the author. Eddington credited Cursiter’s training at a firm of lithographic printers for his meticulous preparation and fine draughtsmanship, during which he ‘…acquired a good knowledge of the technical side of painting and the effect of the judicious arrangement of masses of pure colour.’ He continues: ‘His colour sense is acute, and there is a gracefulness of pose and refinement of treatment that satisfies the aesthetic sense...It is this fundamental quality of truth to nature, combined with a discriminating sense of the beauty of line, a capacity to produce the effect of light on colour as it plays on a variety of objects of different texture, and an efficient technique, that makes Mr Cursiter’s work so successful and so full of promise for the future.’ [2]

A Scottish painter of figure subjects and landscapes, Stanley Cursiter had a distinguished career, culminating in 1948 with his appointment as ‘His Majesty's Painter and Limner in Scotland’ and the award of CBE. Born in Kirkwall, Cursiter moved to Edinburgh around 1905, where he was apprenticed as a designer to a firm of printers, McLagan and Cummings. During this period, he studied five nights a week at the Edinburgh College of Art. After refusing a scholarship to the Royal College of Art in London, he became a full-time student at Edinburgh. Cursiter’s first exhibition was in Kirkwall in 1910, the year in which he met his future wife, Phyllis Hourston.  Between 1914 and 1918 he served in the First World War in France, and although he still managed to paint, it was not until 1920 that he completely resumed his career, setting up a studio in Edinburgh.

The versatility of Cursiter’s artistic talent resulted in several different styles. His early works were mostly Symbolist pictures, conversation pieces and conventional lithographs. He chose however, to concentrate on conversation pieces and in 1920 recalled how the Edinburgh gallery ‘Messrs Aitken Dott commissioned me to paint twenty pictures of pretty girls in pretty frocks, arranging flowers, leaning against a piano or gracing some similar pictorial theme’. Cursiter was elected an Associate of the Royal Scottish Academy in 1927, a full member in 1937, and President of the Royal Scottish Society of Painters in Watercolours from 1951-2.

Cursiter combined the skills of a talented artist and an excellent administrator. From 1924-30, he was Keeper of the National Galleries of Scotland and in 1930 succeeded Sir James Caw as Director, a position he held until 1948, when he resigned in order to devote more time to painting. He also found time to publish two books, Peploe, 1947, and Scottish Art, 1949. As fellow RSA DM Sutherland commented: ‘Stanley Cursiter…had more than a little of the Renaissance man about him…architecture, perspective, geology, agriculture, economy, printing processes, radio, the chemistry of picture restoration, art history and of course painting [were all within his expertise]’ (Stanley Cursiter Centenary Exhibition, catalogue, Stromness, 1987, p.9). Cursiter died in Stromness, Orkney in 1976.