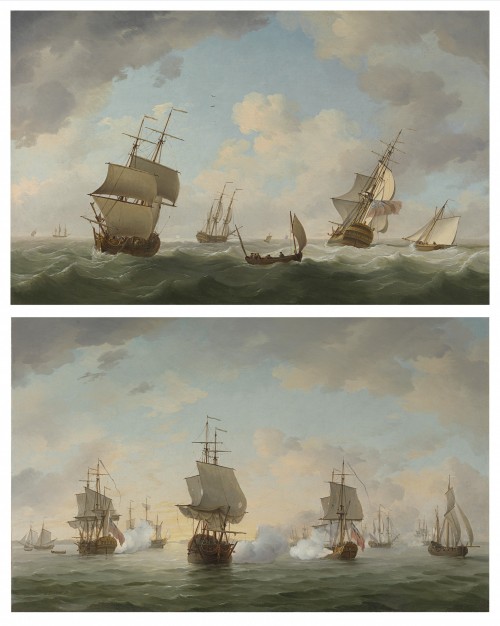 The English privateer squadron known as the 'Royal Family' engaging enemy ships; A merchant snow, two of the King's ships-of-war, a lugger and a cutter in the Channel

The English privateer squadron known as the  'Royal Family' engaging enemy ships; A merchant snow, two of the King's ships-of-war, a lugger and a cutter in the Channel

Charles Brooking was ‘bred in some department of the dockyard at Deptford’[1] and, according to Joseph Farington[2], ‘had been much at sea’, factors which made him exceptionally sensitive to lighting, weather conditions and the detail and handling of vessels in his paintings. This work vividly evokes the excitement of an engagement in calm seas and radiant morning light, the moving clouds giving a panoramic breadth of vision to the picture. The low viewpoint places the viewer right down in the action.

Brooking made a group of works detailing the adventures during the War of the Austrian Succession (1740-48) of the ‘Royal Family’ of privateers, so called because each ship was named after a member of George II’s family. Privateers were privately-funded vessels granted ‘letters of marque’ by the British government in wartime to capture enemy merchantmen (or indeed naval vessels). The government thus gained extra fighting vessels to disrupt the enemy’s economy and harry hostile navies, without the bother of having to pay for them; the privateer syndicate aimed to recoup its investment by selling captured ships and cargo, with the state taking a cut.

This painting depicts the first cruise of the Royal Family, which initially consisted of three ships: the 500-ton, thirty-gun flagship Prince Frederick, named after the Prince of Wales, commanded by Captain James Talbot; the 300-ton, twenty-gun Duke (Captain Morecock) and the much smaller Prince George. Prince George capsized and sank five days out of Cowes, on 2nd June 1745, with the loss of all but twenty of her crew. On 10th July, cruising in the North Atlantic, Prince Frederick and Duke sighted, chased and captured two French vessels, the Marquese d’Antin and the Louis Erasme, which were returning home from Lima. They were laden with 1,093 chests of silver bullion, large quantities of gold and silver plate and many other valuables. When the privateers and their prizes made landfall at Bristol on 8th September, the treasure was transported to the Tower of London in forty-five wagons guarded by armed sailors. It was valued at £700,000, which the owners swiftly loaned to the government at a good rate of return to finance the quelling of the Jacobite Rebellion. When the proceeds were divided, even the most humble sailor received £850. Talbot, now an extremely rich man, retired from the sea to become part of the merchants’ syndicate backing his former squadron.

In May 1746 an expanded Royal Family, commanded by Commodore George Walker in the thirty-two gun King George, made an eight-month cruise which netted around £220,000 in prize money. Walker, a brilliant seaman trained in the Dutch navy, shared some of the characteristics of Patrick O’Brian’s fictional Napoleonic Captain Jack Aubrey: he cared for and was respected by his crews, and he loved music, always carrying musicians on board. Walker put to sea again on 10th July 1747 and on 8th October intercepted the seventy-four gun Spanish ship Glorioso off Cape St Vincent, believing her to be laden with treasure. She had in fact landed the treasure at Ferrol. The King George battled the much larger Glorioso alone for several hours. It is a testament to Walker’s verve and seamanship that the King George survived. Glorioso escaped, but was taken a few hours’ later by the eighty-gun Russell. The syndicate was not amused by Walker’s risking their precious privateer against a man-of-war. They gave him ‘a very uncouth welcome’ in Lisbon, to which he retorted: ‘Had the treasure been aboard, as I expected, your compliments had been otherways; or had we let her escape from us with that treasure on board, what had you then have said?’[3]. The Royal Family then returned home for the winter and was disbanded following the end of the War of the Austrian Succession in 1748.

Derring-do, patriotic fervour and mountains of gold ensured that the exploits of the Royal Family captured the public imagination and caught the attention of artists. Peter Monamy painted The celebrated privateer squadron ‘The Royal Family’ hove-to at sea in 1746 (private collection)[4]. Charles Brooking drew and painted a number of works on this theme, several of which were engraved and published by John Boydell in 1753. Oils of The capture of the Marchese d’Antin and Louis Erasme by the English privateers Duke and Prince Frederick, 10th July 1745 and The capture of the Glorioso 8th October 1747 by the Royal Family privateers Prince Frederick and Prince George are in the National Maritime Museum, Greenwich[5]; a further Royal Family painting is in the Yale Center for British Art, New Haven[6]. Four Brooking drawings connected with the engravings were given to President Kennedy in memory of his brother Lieutenant Joseph Kennedy Jnr and hung at the White House until they were bequeathed by the President to the National Maritime Museum, Greenwich[7].

Despite his short life, Charles Brooking was one of the most influential British marine painters of the eighteenth century. His best work was achieved in the final decade of his life. Brooking excelled at painting shipping in calm conditions, using luminous glazes to give a sense of light on sails moving gently in the lightest of breezes, subtle cloudscapes and the shifting hues and reflections of the sea. He was influenced by Willem van de Velde the Younger and Peter Monamy, but forged his own highly individual style which in turn influenced Dominic Serres the Elder (who may have been his pupil) and Francis Swaine.

Charles Brooking was born in Deptford in 1723, probably ‘bred in some department of the dockyard’; his father may have been the Charles Brooking who was a painter and decorator at Greenwich from 1729 to 1736. He is likely to have been self-taught. Two small marine paintings in a private American collection are signed C. Brooking aged 17 years. In 1752 he worked as a botanical draughtsman for John Ellis’s (?1710-1776) Natural History of the Corallines (1755). Brooking is said to have worked for a dastardly picture dealer in Leicester Square, who concealed his identity so that clients would not be able to commission him directly. However, his paintings portraying the exploits of the ‘Royal Family’ privateers were engraved and published in 1753, the same year as Morning, and in 1754 Taylor White, Treasurer of the Foundling Hospital, commissioned the great sea-piece Flagship before the wind under easy sail (still in situ at the Foundling Museum, London). Brooking, like the other artists who contributed to the Foundling Hospital’s decoration, was made a Governor for his pains.

Brooking depicted naval actions from the War of Jenkins’ Ear, 1739, although he never painted a fleet action. His paintings were informed by a thorough knowledge of the sea; he owned a small cutter, a plan for which survives in the Chapman Collection of the Sjohistorikas Museum, Stockholm. Brooking’s output was limited by the consumption which slowly killed him. He died aged only thirty-six in London in 1759, leaving his family destitute. His widow and children were allocated 10 gns from the profits of the Society of Artists’ exhibition of 1761. 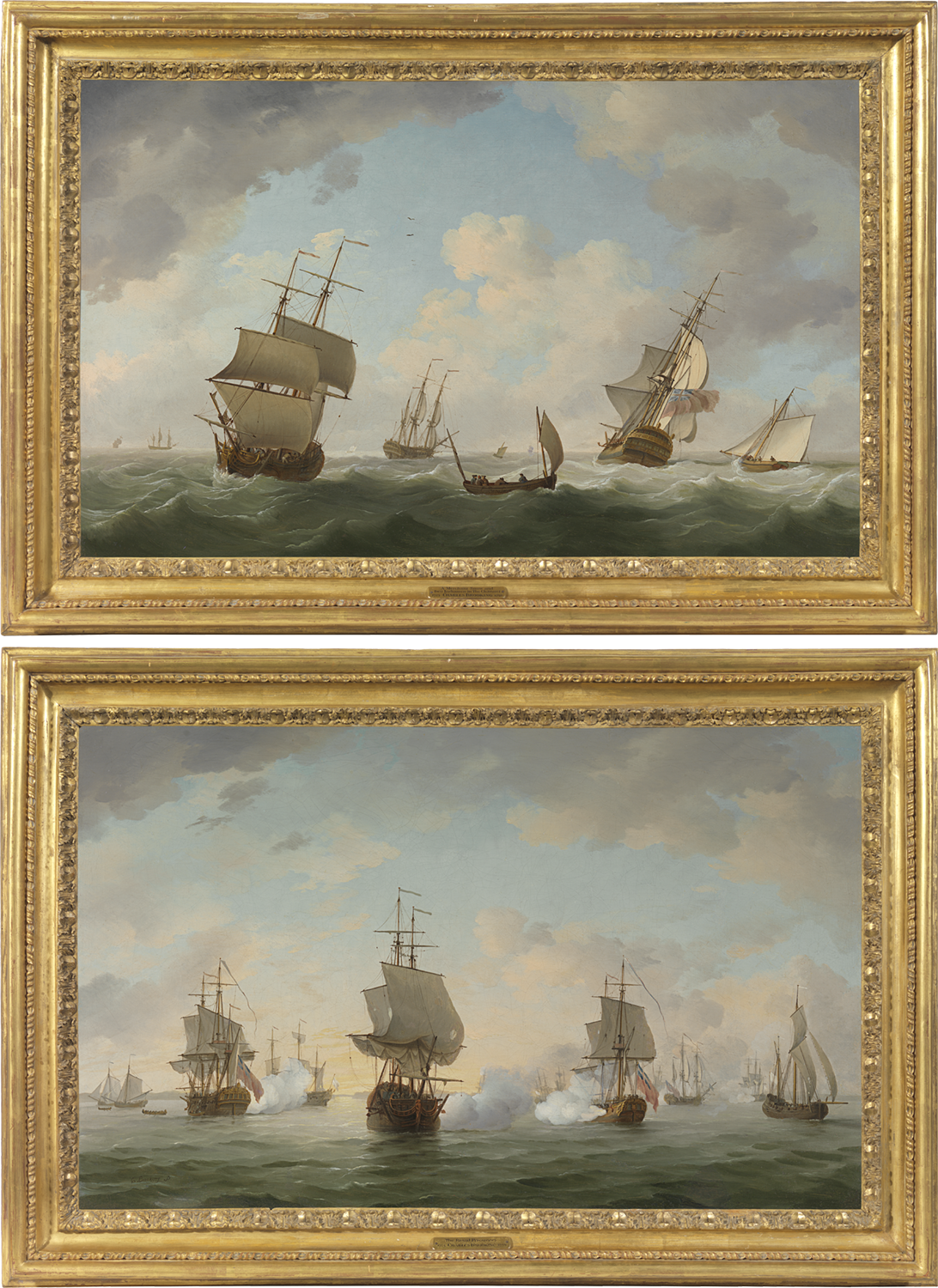