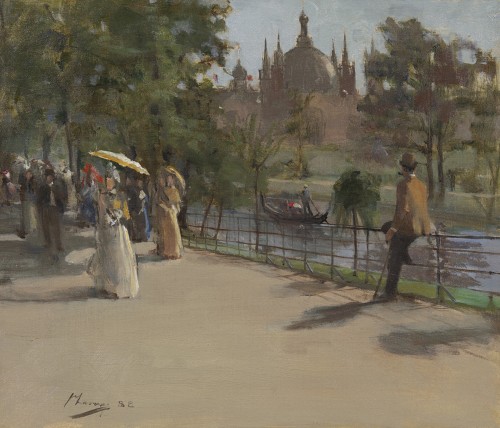 In October 1888 John Lavery exhibited fifty studies painted in the grounds of the Glasgow International Exhibition at the Craibe Angus Gallery at 159 Queen Street, Glasgow.[1] To date, nearly forty of these have been identified, although confusion arises with those simply entitled The Glasgow International Exhibition, as here. The appearance of a previously unknown example is therefore a moment of great importance for Lavery students and collectors. Painted on a sunny day on the riverside walk looking towards James Sellar’s Palace of Industry, it shows a group of visitors strolling towards the arena where military tattoos, games and other entertainments were held. Oblivious to the crowd, a solitary cigar smoker perches on the fence to survey a gondola on the river Kelvin, specially imported with its gondolier, from the serenest of cities. It was a motif that attracted the painter on at least two other occasions, and one that he employed on his private view invitation card. Lavery’s show was staged one month before the closure of the Exhibition.

Officially opened by the Prince and Princess of Wales in May, the Glasgow International Exhibition had been planned during the previous two years with the purpose, at least in part, of competing with the Edinburgh International and Manchester Jubilee exhibitions of 1886 and 1887 respectively.[2] Overlooked by Gilbert Scott’s university buildings, the whole park at Kelvingrove, the present location of the city’s art gallery, was given over for the occasion, and in addition to displaying the arts and industries of the Empire, from Indian potters to Welsh weavers, there were restaurants, cafés, kiosks, fountains and a bandstand for regular performances. Art, initially neglected in the planning, was well-represented in a display of 2,647 items – paintings, sculpture, architecture and photography, as well as an abundant supply of prints and drawings, many of which were for sale.[3] Thanks to the diligence of Robert Walker, the secretary, and James Muir, convenor of the loan section, many works by French and Dutch artists were represented, mostly drawn from west of Scotland collections. The exhibition was, as Lavery’s crowds indicate, immensely popular and after the first six days the Glasgow Herald could boast that attendance at 231,713 visitors far outstripped that of Manchester which attracted 120,088 in the same period.[4]

Lavery’s involvement with the exhibition was at first merely as an exhibitor. Being close friends with James Guthrie and Robert Macaulay Stevenson he must have, however, supported their efforts in the autumn of 1887 to have the ‘art workers’ of Glasgow included.[5] His current project, two large canvases depicting the aftermath of the battle of Langside chimed fortuitously with one of the emerging themes of the International which was devoted to the life and times of Mary, Queen of Scots.[6]

However, Lavery’s engagement with the International was not primarily as a history painter. He had merely diverted temporarily into the genre, and with works such as the present example, returned resoundingly to modern life. At this time, when The Tennis Party (Aberdeen Art Gallery) had just been awarded a gold medal at the Salon, his artistic identity as reporter on the contemporary scene was confidently reinforced.[7] Not long after the International Exhibition’s commencement he adopted the role of an artist-in-residence, recording many aspects of the display. Interiors represented the sculpture gallery, the restaurants, the tobacco kiosk, and booths in the main exhibition buildings; there were views of the park and the military tattoo and nocturnes depicting the fireworks and the colourful ‘fairy fountain’. However, those showing the crowds and the dome of the main hall, define the exhibition in a more general sense, and the present example is one of these. The two other salient examples are A view from the canal, Kelvingrove, of the Industrial Hall at the first International Exhibition, Glasgow (fig.3, The Higgins Art Gallery & Museum, Bedford) and The Glasgow International Exhibition, Twilight (fig.4, Glasgow Museums).

Lavery’s viewpoint for the former is strikingly similar to that of the male figure on the right of the present work and his location can be plotted from the panoramic view of the grounds, published in The Scottish Leader, and from contemporary photographs (fig.s 1 & 2). We are left with the tantalizing thought that the present canvas, uniquely among the extant exhibition pictures, may represent the artist himself.

When Lavery’s summer enterprise was completed, fifty canvases were placed in ‘Watts’ style frames for the Craibe Angus show. The result was a critical success, and the artist was warmly praised for the richness and variety of his studies; these were not ‘hasty memorials’, but ‘completed pictures’ which in ‘arrangement, colour or effect’ did not repeat themselves.[8] The oil sketching style – lightly indicating the main motif with the tip of a sable brush – looking for overall atmospheric effect, could be regarded by some as ‘impressionistic’, but the point was simply that these, more than any other record, supplied an agreeable souvenir of an exceptionally successful event in the life of the city. Such was its renown that Queen Victoria made a State Visit to the Glasgow International on 22nd August 1888, and Lavery was on hand to sketch the moment. His Craibe Angus show and this visit resulted in a commission for a large commemorative record of the event that would occupy him for the next two years, up until his first visit to Tangier (fig.s 7 & 8).[9]

For the present, in the summer of 1888, there was only the pleasure of sunny days sitting in the park, smoking a cigar, and contemplating the great pleasure dome of the International Exhibition.

Professor Kenneth McConkey, specialist in British and Irish art at the turn of the twentieth century and distinguished biographer of Sir John Lavery (2010).

Lavery returned to Glasgow in 1885 and became one of the leading members of the Glasgow School.  He moved to London in 1896 and helped Whistler to found the International Society in 1898, of which he was a Vice-President until 1908. He was elected an Associate of the Royal Academy in 1911 and became a full Academician in 1921. He was appointed Official War Artist to the Royal Navy in 1917, and was knighted the following year. Lavery travelled extensively during his career, visiting Morocco, Italy, Spain, Germany and Holland, and these visits inspired many of his works. Following the death of his wife, Hazel, in 1935, Lavery set off for Hollywood with the idea of painting the 'stars'. With the outbreak of the Second World War, he returned to Ireland and died at Kilmaganny in 1941.

[1] No catalogues for the above appear to have survived. Prior to the present rediscovery, thirty-six of the fifty works have been traced.

[5] Both Guthrie and Stevenson, through their west of Scotland family backgrounds, could be regarded as having more influential connections than he.

[6] Nightfall, Battle of Langside (Belgian Senate, Brussels), and Dawn, 14th May 1568 (Private collection) were both started before the themes of International were known.  The latter was shown at the International (no.541) in Gallery 3, reserved for ‘British Sale Pictures’. Lavery’s other work, The White Rose, featured in the ‘British Loan Pictures’, Gallery 2, (no.258). 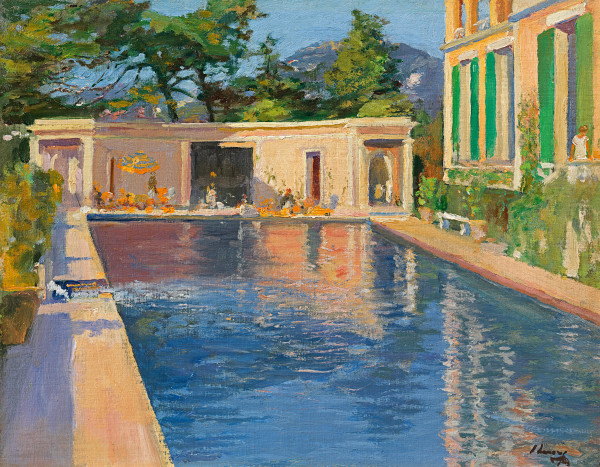 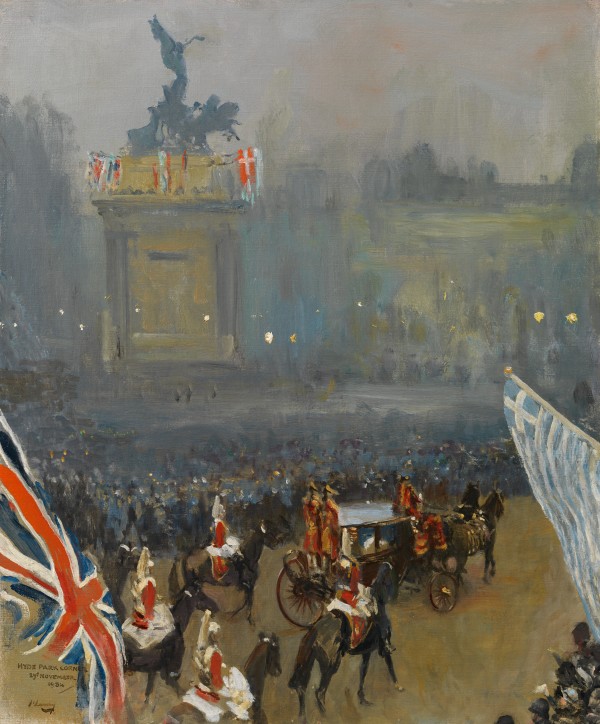 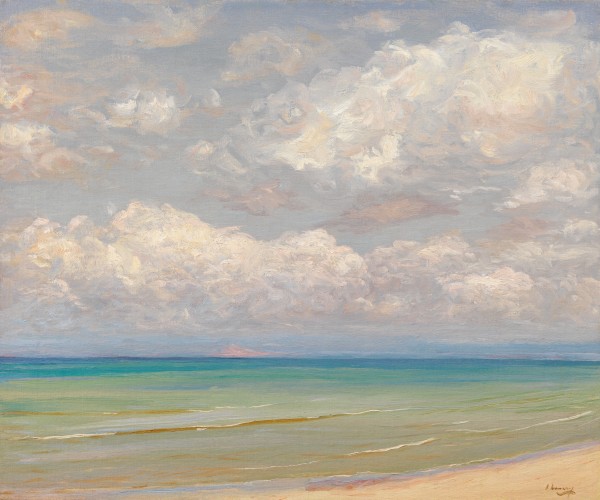