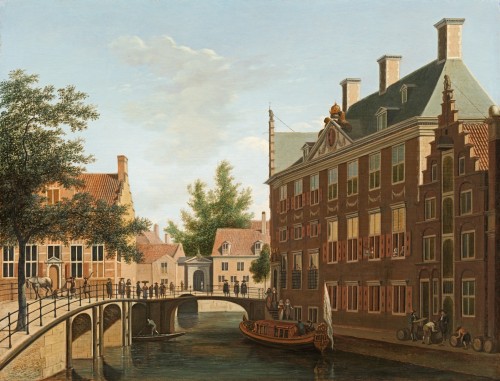 The Oudezijds Heerenlogement, on the confluence of the Grimburgwal and the Oudezijds Voorburgwal, Amsterdam

The Oudezijds Heerenlogement, on the confluence of the Grimburgwal and the Oudezijds Voorburgwal, Amsterdam

Nijstad Oude Kunst BV, The Hague, by whom sold on 1st November 1978 to

C Rosenberg (ed.), FM Simons, On Loan from Holland, A Dutch Treat, Selections of XVII and XVIII Century Dutch Art from the Collection of Dr ACR Dreesmann; A Bicentennial Celebration of Relations between the United States and the Netherlands, exh. cat., South Bend, IN, 1982, p.52, no.1, fig. 14

Gerrit Berckheyde specialised in views of Dutch cities, a genre which flourished after the 1648 Treaty of Münster granted the United Provinces formal independence from Spain. Although he lived all his life in Haarlem, Berckheyde made a number of paintings of Amsterdam, the economic powerhouse of the northern Netherlands, which was easily reached from his home town by an hourly barge service. ‘In Haarlem there’s art, but in Amsterdam there’s money’, declared a Haarlem Painters’ Guild New Year greeting[1].

From 1650 to 1672 no Stadhouder (representative of the sovereign) was appointed. The Dutch cities consolidated their power and expanded as local economies grew and trade to the Americas, Africa, the Far East and India brought luxuries such as silk, spices and porcelain to the Netherlands. Magnificent new houses sprang up along the canals and pride in the cities fuelled the work of cityscape specialists including Pieter Sanredam (1597-1665), Jan van der Heyden (1637-1712) and Berckheyde himself.

This view depicts the Grimburgwal, just south of the Dam, with the Oudszijds Voorburgwal opening up to the left and the end of the Oudezijds Achterburgwal beyond. The magnificent building on the right is the Oudezijds Heerenlogement, built in 1647 by Philips Vingboons (1608-1688) as one of the city’s four official inns. It welcomed important visitors including Amalia van Solms in 1655, the Stadhouder and future King of England William III in 1672, and Tsar Peter the Great of Russia, who came to Amsterdam in 1697 to study shipbuilding and naval technology. In Berckheyde’s painting, two elegant couples descend the steps to the canal, while a trumpeter at the window salutes dignitaries arriving or departing in the barge. The Oudezijds Heerenlogement was demolished in 1876 and its portal transferred to Keizersgracht 365, where it still stands. Right of the Oudezijds Heerenlogement is the warehouse known as ‘The Coat of Arms of Amsterdam’[2], with a merchant inspecting the barrels being delivered.

On the left, in brilliant sunshine, is the dwelling built in 1609 known as the House on Three Canals, which still survives remarkably unchanged. In the distance, beyond the bridge which gives access to the Oudezijds Heerenlogement, is the entrance to the Sint-Pietersgasthuis, a convent converted into a hospital[3].

Berckheyde’s composition is built on rhythmic contrasts: the shadowed Oudezijds Heerenlogement and the sunlit House on the Three Canals; the stepped gable in shadow opposite the one in the sun; the downward curve of the bridge and the upward curve of the barge passing under it. He softens the urban scene with three judiciously placed trees. The figures range from well-dressed bourgeoisie to tradesmen and a market woman with goods balanced on her head. Although seemingly casually arranged, they are in fact deployed at careful intervals, leading the eye across the painting and into the distance, where the tiny figure of a woman catches a shaft of light as she passes under the gate of the Sint-Pietersgasthuis. The calm and meticulous view breathes classicism and balance, a reflection of a well-ordered society.

Another version of this view is in the Amsterdam Museum[4]. The viewpoint and the fall of light are the same, but the details of the staffage are different. For example, in the foreground a trumpeter stands on the prow of an open barge bearing wealthy passengers, while another boat is rounding the curve of the canal in the distance. There are barrels in front of the warehouse, but no figures, as in the Richard Green version.

The House on the Three Canals, with the gateway of the Sint-Pietersgasthuis in the distance.

Baptised in Haarlem on 6th June 1638, Gerrit Adriaensz. Berckheyde was the son of a butcher, Adriaen Joppen Berckheyde, and his wife, Cornelia Gerritsdr. Pancier. His brother, Job (1630-1693), who was eight years his senior, probably taught him to paint. In the 1650s, the two brothers made an extended trip to Germany, but they had probably both returned to Haarlem by 1654, when Job was admitted to the Haarlem Guild of St Luke. In 1660, Gerrit, too, joined the Guild, and produced his first signed and dated works the following year. During this period, he shared a house with Job and his sister, Aechje, in the Sint-Jansstraat, close to the Grote Markt. None of the siblings seems to have married. Gerrit specialised in city views, particularly of his native Haarlem, the northern Netherlands’s commercial capital, Amsterdam, and The Hague, seat of the Court. He also made views of German cities and idealised, Italianate countryside.

From 1666 to 1681, Gerrit was a member of the Haarlem rederijkerskamer called De Wijngaardranken (The Vine Branch), an association to which many artists belonged. In 1679 the two brothers signed a lease on a house next to the bell-tower, near St Bavo’s church in Haarlem. Both brothers held offices in the painters’ guild during the 1680s and 1690s. Job died in 1693 and, five years later, Gerrit drowned in the Brouwersvaart, while taking a shortcut through a private garden after leaving a tavern. He was buried in the nave of the St Janskerk on 14th June 1698.

The work of Gerrit Berckheyde is represented in the Rijksmuseum, Amsterdam; Amsterdam Museum; the Maurithuis, The Hague; the Albertina, Vienna; the Hermitage, St Petersburg; the Louvre, Paris; the National Gallery, London; the Fitzwilliam Museum, Cambridge; the Museum of Fine Arts, Boston; Philadelphia Museum of Art and the Detroit Institute of Arts.

[3] Known as the Binnengasthuis since the nineteenth century and used as a hospital until 1981. The complex is now part of the University of Amsterdam.

[4] Signed lower right: g. Berck Hey. Oil on panel: 12 ¾ x 16 ¾ in / 32.5 x 42.5 cm. Inv. no.SB 329, on loan since 1947 from the Rijksmuseum. The description of the topographical details in the Richard Green painting is indebted to Norbert Middelkoop’s catalogue of the Amsterdam Museum version, AM Collection online. We are grateful to him for providing further details about the Richard Green version.