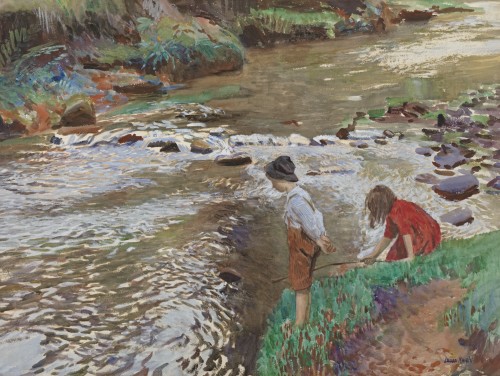 J Collingwood Stewart Esq, an eminent Newcastle surgeon, who for many years was a Committee member of the Laing Art Gallery then by descent

London, The Royal Society of Painters in Watercolours, Winter 1915, no.67

Newcastle upon Tyne, Laing Art Gallery and Museum, Loan Collection of Paintings and Drawings by Dame Laura Knight and Harold Knight, 1933, no.2

To be included in the forthcoming catalogue raisonné of the work of Dame Laura Knight currently being prepared by R John Croft FCA.

This painting is currently included in a major retrospective of the artist’s work, Laura Knight: A Panoramic View, at the MK Gallery, Milton Keynes, until 20th February 2022

In 1915 the first restrictions against painting any part of the coastline came into force. Laura Knight in her autobiography refers to how strictly the local authorities defined the limitations, which necessitated her confining her studies to boys swimming, looking down on them, whilst not being permitted to show any sea horizon. During the First World War, Laura’s work, apart from Lord Beaverbrook’s Commission for the Canadian War Records to paint, Physical training in a camp at Witley, was confined mainly to portraits, children, and inland scenes, with some models on the cliff top once permits were later introduced. However wartime constraints did not hold Laura back on producing more and more works. In this period, Spring, 1916 and Penzance Fair, 1916 were both painted and Ice skating and Snowballing were both derived from drawings of children skating and sliding. The two fishers was almost certainly painted in this period of wartime constraints, in the stream, in or just above Lamorna Valley, which is located behind Lamorna Cove.

“In the valley-dip, filled with the lichen-bearded trees, the blackthorn, in dazzle of white powder, brings winter back again – “March snow” they call it.

The year still young, a sunlight morning, down Lamorna Valley, varnished buds are thinking to burst. The elms edge their effulgence of twig with rosy blush, a halo scarce discernible.  It would then seem that the wood growth has no root, is weightless, suspended in a pulsating atmosphere, pregnant with moisture of the Atlantic mist. Unreal – a dream - a dream valley.” (op. cit. pp.204-205).

Laura developed a real understanding of children and their movements that is demonstrated in many of her works for example: The beach, 1906, Laing Art Gallery, Newcastle; The boys, 1910, Johannesburg Art Gallery, South Africa; Flying the kite, 1910, South African National Gallery, Cape Town.

In 1900 together with her sister Eva, Laura moved to Staithes (1900 – 07), where in 1903 she married Harold who she met at the Nottingham School of Art. In the last three years Laura and Harold spent short periods of time at the artist colony at Laren, Holland.

In 1903 Laura had her first painting hung at the Royal Academy Mother and Child No.1. Towards the end of 1907 Laura and Harold moved to Cornwall where they stayed for ten years till 1918. Laura developed a close friendship with both Alfred Munnings and also with Lamorna Birch and his wife “Mouse” and spent much time in Lamorna.  Several of Laura’s well known early works were painted in and around Lamorna e.g. Lamorna Birch and his daughters 1913; Spring 1916. On moving to Cornwall Laura’s work developed and flourished; her work became much softer and yet aglow in colour and painted en plein air. As in Staithes Laura continued to paint children e.g. The Beach 1908; The Boys 1910 and Flying the Kite 1910. The Beach was a transitional work moving away from the less flamboyant painting of the Staithes period. For some of Laura’s most delicate paintings in this period she employed the medium of watercolour, something she had started with great effect in the early 1900’s. An early example of watercolour and bodycolour was Cheyne Walk 1909 and another example of this delicate painting was the gouache and watercolour Wind and Sun c1913.

Following the move to London another new period of change started in her work, as she became increasingly absorbed in new subject matters, that were to include – the ballet – the theatre – the circus – country and rural scenes. Although Laura attended the Diaghilev Ballet Russes before the Great War 1910 – 1914 , it was not until the 1920’s that she had obtained permission to work backstage.  In the world of ballet, Laura befriended and painted many of the great ballerinas and ballet dancers of the time that included Karsavina, Lopokova, Pavlova, Spessitseva, Tchernicheva and Massine amongst others. Work backstage at the ballet improved her drawings as it forced her to produce quick drawings that reduce a line to a minimum and equally important drawings that were accurate. If Laura’s drawings were inaccurate the famous ballet instructor Cecchetti would blame the dancer not Laura.

Also in the 1920s Laura met Bertram Mills and the Great Carmo that began Laura’s famous circus scenes. In the early 1920’s Laura also experimented and developed other artistic techniques that included etchings, aquatint, linocuts, woodcuts and Lithographs. (During WWl she had already produced painted jewellery, ceramics and enamel plaque work with Ella Napper). The 1920’s were a decade of major achievements for Laura:-

- Made a Associate of the RA in 1928, being only the second woman after Anne Surymerton,

- Appointed a DBE 1929, being the first woman artist ever to receive this title.

Laura is not famous for her portraiture, but the wide range of portraits are perhaps not sufficiently recognised as they include the famous such as Anna Pavlova; George Bernard Shaw; Gwen Ffrangcon-Davies; Lubov Tchervichev; Paul Scofield, WH Davies as well as the not so famous such as clowns, gypsies, children and other people, that include Dolly in Marsh Mallows, which was sold for £331,500 in 1999.

In the 1930’s Laura spent much time in the Malverns invariably receiving invitations to Barry Jackson’s Malvern Festivals and where as his houseguest she met authors, playwrights, actors and notabilities from all walks of life. In the same period Laura was drawing/painting boxers at Blackfriars and painting ceramics dinner sets for Arthur J. Wilkinson and Clarice Cliff!

During the War Laura received various Commissions via the War Artists Advisory Committee e.g. In for repairs 1941, A Balloon site, Coventry 1942, Ruby Loftus 1943, Take Off 1944, factory workshops, Land Girls and many others. Laura Knight’s fame continued after WWll, with her commission for the Nuremberg Trials 1946, being elected to serve on the Royal Academy Hanging Committee 1946 and a further Commission for the Coronation 1952. Laura found most of her painting subjects in London during the winter months and in the brighter months of the year they stayed in their hotel in Colwall.  Laura painted many agricultural and country scenes in the Malvern area before, during and after WWll.

When Barry Jackson took control of the Stratford on Avon theatre she again became theatrically minded and spent many seasons with him and Scott Sunderland. Later Barry Jackson asked Laura to do a number of records for him at The Old Vic. “I filled many big sketch books with perhaps the best drawings I ever did of life backstage.” p.325 Magic of a Line.

Laura started life in poverty, but became financially successful and developed lasting friendships who ranged from not only gypsies, circus folk, the farm and factory worker but also with those more fortunate, that included famous authors, actors, playwrights, judges at Nuremberg and aristocrats. Laura also travelled widely in the UK, Europe and America. All this was achieved in an era, when women were still fighting to vote and in instances where women were at times not generally accepted in some masculine quarters. All of these friends and most of her acquaintances kept in contact with this remarkable woman to the end, as demonstrated by her Memorial service held at St James Church, Piccadilly 28th July 1970.

In her last years Laura asked me “Have I tried too many different media, too many different subjects?” I could not give her an answer as she then went on “I do not know, except that my inner self continues to say even today - go on, keep on trying something different”

Other Works By
Dame Laura Knight: 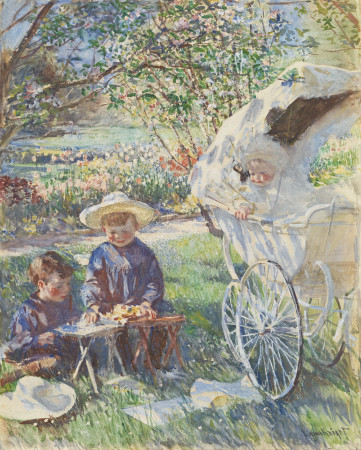 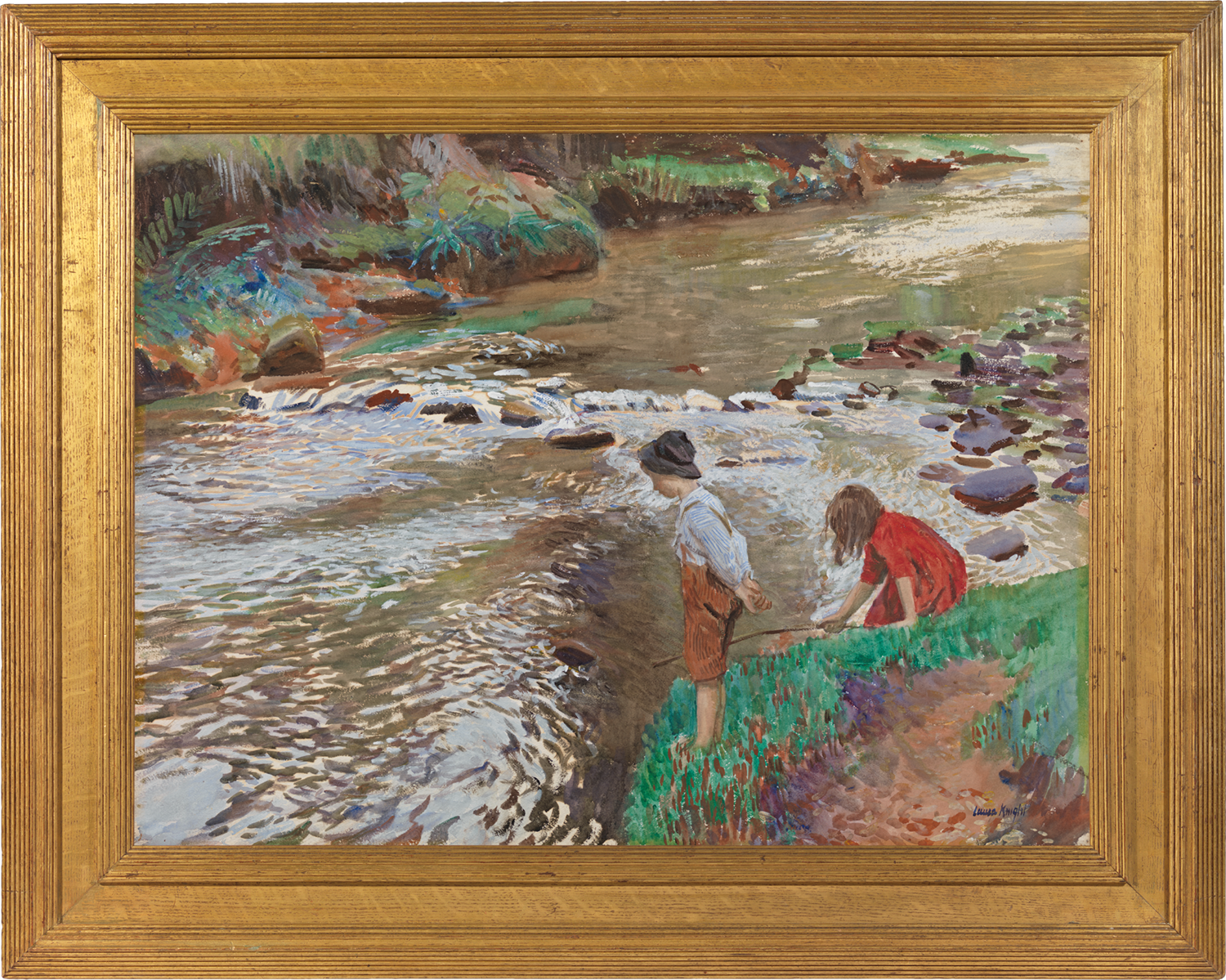