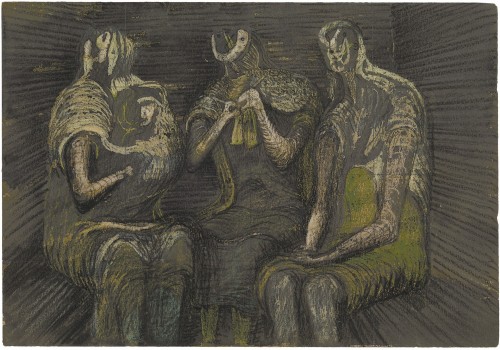 Signed, dated and inscribed on the reverse: Henry Moore / Three Women in Shelter /(one knitting & one with a child). 1941

Recorded in the Henry Moore Foundation archives as HMF 1759

Henry Moore was living in Burcroft cottage in Kingston, Kent, when war was declared on 3rd September 1939, driving up to London a few days a week to teach at the Chelsea School of Art. With the fall of France and the threat of invasion, by June 1940 he and his wife Irina had returned to their studio at 11a Parkhill Road, Hampstead. Shortly after Hepworth and Nicholson’s move to Cornwall with the triplets, the Moores accepted the offer of their less expensive space at No. 7 The Mall Studios (just off Parkhill Road) by early September. A month later, after a weekend at the home of their friend Leonard Matters in Hertfordshire, they came back to find the studio badly damaged by bomb blast. The Moores returned to Much Hadham that night and within a few months were renting an old farmhouse called Hoglands in the nearby hamlet of Perry Green which would remain home for the rest of their lives.[1]

Moore initially refused the honour of becoming an Official War Artist, but was drawn to the subject of Londoners seeking refuge from the Blitz (which started on 7th September 1940) from his first sight of the shelterers at Belsize Park tube station: ‘I had never seen so many rows of reclining figures and even the holes out of which the trains were coming seemed to me to be like the holes in my sculpture…People who were obviously strangers to one another forming tight

little intimate groups. They were cut off from what was happening up above, but they were aware of it. There was tension in the air. They were a bit like the chorus in a Greek drama telling us about the violence we don’t actually witness’ (Henry Moore: A Shelter Sketchbook, British Museum Publications, London, 1988, p. 9).

Following this affecting experience, Moore began to travel by tube visiting the underground

stations where people sought shelter, making notes to recall subjects and poses which he would sketch from memory the following day.[2] He would then execute larger, more finished drawings based on his notebook sketches. Three Women in a Shelter, which is squared in pencil ready for transfer, is the preparatory sketch for Shelter Drawing: Three Fates, 1941 [HMF 1830, AG p. 100] in the collection of Brighton Museum and Art Gallery, gifted from the Contemporary Art Society in 1942. The figures in both works refer to The Fates of Greek mythology otherwise known as The Moirai: Lachesis, Clotho and Atropos, whose winding, measuring and cutting of the metaphorical thread of life determined mortal destinies.[3] Moore’s own life-thread connects the figures to the three important women in his own family and his frequent models, his mother, his sister and his wife. The strange triumvirate, one holding a child, one knitting, one with hands clasped in her lap, brilliantly portray the tension of enforced intimacy, the fragility of life and the threat of violence unseen by combining shelter scenes remembered with imagined sculptural forms. The naturalistic bodies engaged in acts of domesticity combined with abstracted heads signifying psychological disquiet.

Trapped within the shadowy confines of an air-raid shelter, the artist emphasizes the sense of claustrophobia with the dramatic perspective of the corrugated walls, ruled first with pencil then black crayon and covered with a dark wash broken with narrow patches of white. Moore strengthened the shading between and around the seated women to add depth to the enclosed space and project further the bright monumentality of the figures seemingly too large for their subterranean surroundings. Moore’s use of drapery plays a significant part in describing the three-dimensional, naturalistic bodies of the women, curving around their shoulders and falling in tight, linear ripples to their calves. Its undulating articulation seems to tie them closer together. Their arms, individuating their actions, demonstrate Moore’s two-way sectional technique, which he described as the use of line to define ‘both down the form as well as around it, without the use of light and shade modelling’ (cited in Alan G. Wilkinson, The Drawings of Henry Moore, exh cat, The Tate Gallery, London 1977, p. 16). In contrast to the depiction of limbs, the figures’ torsos are empty as if hollowed or carved out, their heads highly abstracted in a sculptural manner characteristic of Moore’s drawings of the late 1920s and 30s. Their skeletal aspect closely corresponds with his transformation drawings inspired by found natural objects such as pebbles, shells and bones, which were then metamorphosed into sculptural forms. The luminous, rough textured appearance of the white, wax crayon extends the organic correlation, the effect of his palette as Geoffrey Grigson stated, like ‘the lichen on the grey rock, the coloured texture of weather-worn stone’ (cited in C. Stephens (ed.), Henry Moore, exh cat, Tate Publishing, London, 2010, p. 165). Moore has also introduced two shades of green into lines and

areas of each figure, perhaps a further suggestion of nature outside the shelter or the unnatural phosphorescence of electric light.

Three Women in a Shelter was executed on a page of Moore’s horizontal notebook in 1941. There are twelve known drawings attributed to the notebook,[4] which was subsequently disbound, most likely in preparation for the artist’s first solo exhibition in American at the Bucholtz Gallery, New York, in May 1943. Though no list of the forty exhibited drawings exists, the majority of pages from the notebook are now in private and public collections in the USA, including the Santa Barbara Museum of Art, California and The Art Institute of Chicago.