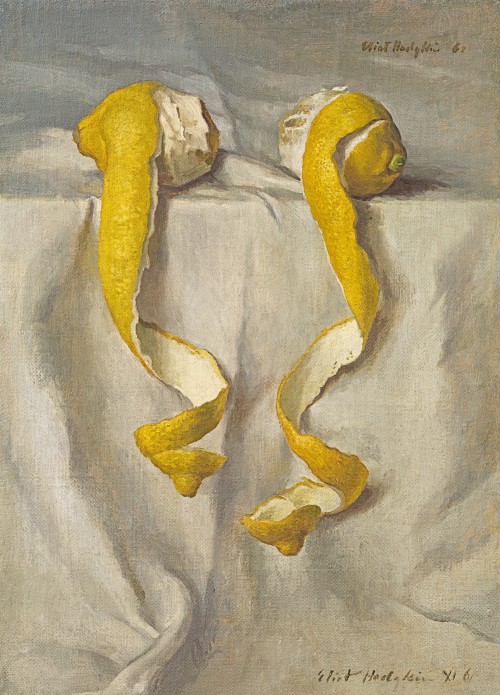 In a gessoed and waxed frame

Paul Gallico, acquired from the above in 1963 and gifted to his wife, Virginia for Christmas that year

This work will be included in the forthcoming catalogue raisonné currently being prepared by the Artist’s Estate.

Eliot Hodgkin is celebrated for his small, beautifully composed still life paintings, meticulously rendered with infinite care and minute attention to detail. Writing in the foreword for the exhibition, Brought to Life: Eliot Hodgkin Rediscovered at Waddesdon in 2019, Lord Rothschild describes the powerful impact of Hodgkin’s ‘jewel-like paintings, with their subtlety, lustrous depth of colour, delicacy and deceptively simple realism.’[1] In this exquisite, almost devotional image, the artist portrays two half peeled lemons, their shiny, pitted skins coiling over a draped edge in a delicious feat of trompe l’oeil. The bright, dappled yellow of the sculptural citrus fruit shines against the silvery tones of the drapery, whose delicate folds echo and enhance the sinuous curls of the lemon peel. Lemons, whether whole, cut or peeled, in works such as Two lemons (one peeled), 1957, in the Devonshire Collection, Chatsworth, were a favourite subject with the artist who intensely observed and precisely caught their character, colour and texture. This elegant, perfectly poised work demonstrates Hodgkin’s unique ability to look ‘at quite simple things as though I was seeing them for the first time and as though no-one had ever painted them before.’[2] Writing to his friend and fellow-collector, Sir Brinsley Ford in 1975, Hodgkin wrote ‘I like to show the beauty of things that no one looks at twice.’[3]

The careful, almost obsessive arrangement of each still life subject took the artist a great deal of time and was followed by a detailed drawing, later transferred by tracing onto canvas or panel before painting with very fine sable brushes. Hodgkin often worked in tempera,[4] but the 1960s saw his return to painting in oils, the artist commenting in 1963 that when he started an oil painting, he felt like a boy being let out of school.[5] Hodgkin’s consummate technique has frequently been compared with Dutch and Spanish painters of the seventeenth century. He particularly admired Adriaen de Coorte’s unusual, yet simple studies of fruit and vegetables often balanced on a stone ledge, and once owned a painting of wild strawberries by the artist. Adrian Eeles also suggests an affinity with the dramatic still life paintings of Francisco de Zurbarán, whose Still life with lemons, oranges and a rose, 1633, at the Norton Simon Museum, Pasadena, Hodgkin must have known.[6] Hodgkin also admired and owned a painting by Giorgio Morandi, whose work demonstrates an equal emphasis on the relationship between still life objects.

[4] Hodgkin wrote ‘How I Paint in Tempera’ for the Year Book of the Society of Painters in Tempera in 1967.