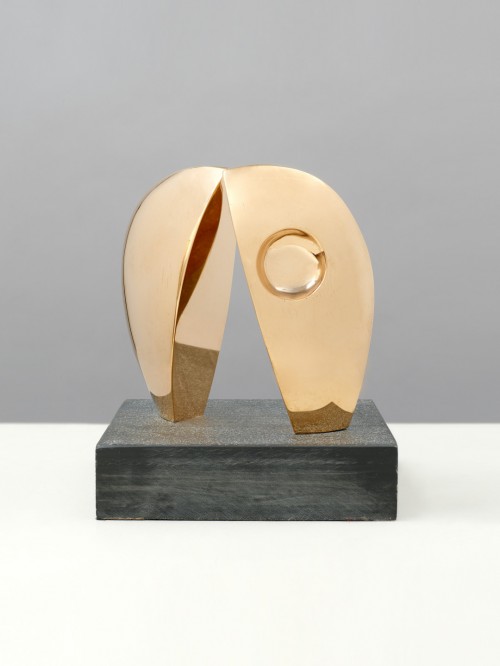 Conceived and cast in 1962 at Holman, St Just, Cornwall in a numbered edition of 10

This work will be included as BH 318 in the forthcoming catalogue raisonné of Barbara Hepworth’s sculptures being revised by Dr Sophie Bowness.

Hepworth described the 1960s as ‘a fulfilment of my youth.’[1] The variety of surface, scale and material in Hepworth’s sculpture from this period is extraordinary, from African hardwood, sheet brass, iron, copper, slate and marble to polished and patinated bronze. Perhaps the most significant and in some ways surprising development occurred in 1956, when Hepworth began to work enthusiastically in metal, creating sculpture in plaster to be cast in bronze. In the 1930s, the artist’s determined personal and philosophical attitude against modelling (in direct opposition to the rigorous discipline of direct carving with its expression of truth to material) would have made this advance seem impossible. However, as Hepworth explained to Alan Bowness in 1970, carving was also involved in the working of plaster: ‘My approach to bronze isn’t a modeller’s approach. I like to create the armature of a bronze as if I’m building a boat, and then putting the plaster on is like covering the bones with skin and muscles. But I build it up so that I can cut it. I like to carve the hard plaster surface. Even at the very last minute when it’s finished I take a hatchet to it.’[2]

While adopting new materials and creative processes, Hepworth’s sculpture of the 1960s often looked back to the formal purity of her geometric compositions from the 1930s, revisiting the dialogue between two and three part groupings in works such as Two Forms with Sphere, 1935–6 (private collection). Two Forms, 1962, can be seen to adhere to this nostalgic tendency, the beautiful curved, semi-circular forms standing separately, but gently inclining towards each other

creating a triangular void filled with spatial tension. Besides the concave circle at the front of the element on the right, the pair of forms appear to be exactly the same, almost a mirror image, as the highly reflective surfaces suggest. Their warm, golden tonality is exquisite, the rhythmic play of light across the polished exterior mesmerizing. Hepworth counters the lustrous surface of the polished bronze with a block of matt slate whose vertices are repeated at remarkable angles within the shining forms.

In the same year that Hepworth produced the present work, she also created Holed Hemisphere (BH 320) and Sphere and Hemisphere (BH 319b) both in polished bronze, though on a slightly smaller scale (4 inches or under). She went on to explore this theme further with a series of small, rounded, but often irregular forms in slate and alabaster, entitled Three Forms in Echelon, in 1963 and 1964. Towards the end of the decade, Hepworth made what seems to be a monumental variation on the theme, Two Forms (Divided Circle), 1969, casts of which are in the collections of the Barbara Hepworth Museum, St Ives and Bolton Museum and Art Gallery.