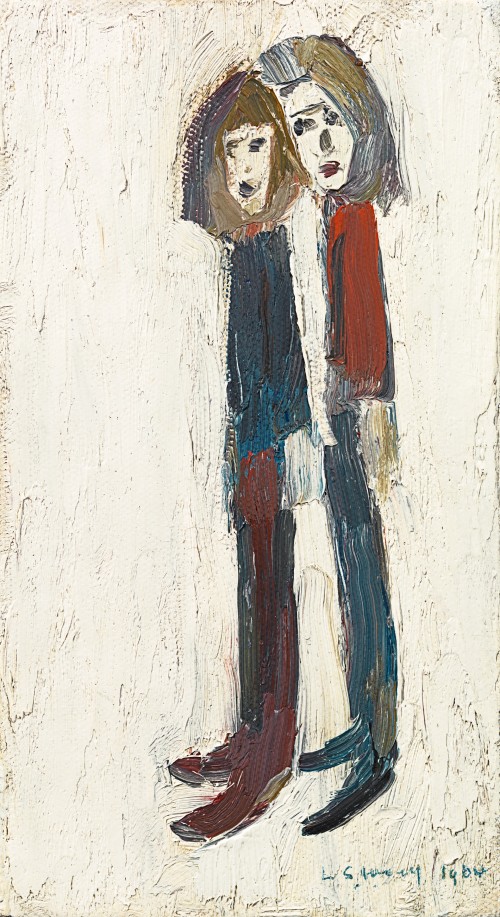 Towards the end of the 1950s, Lowry became less interested in scenes filled with milling crowds and began to paint fewer figures standing against a richly textured, flake white ground. In small scale paintings such as the present work, Lowry depicts a focussed microcosm of his earlier mill scenes, concentrating on individual characters and their interaction. These intimate and intriguing works encourage the viewer to imagine the protagonists’ relationships, each glance and posture drawing the eye from one person to another, reflecting an ‘incident glimpsed, a conversation overheard, a snatch of reality.’[1] Lowry’s colourful, disparate figures are fluidly and yet precisely articulated. A master of movement, of the fleeting gesture caught in line and shape, a simple turn of the head, curve of the back and placement of the hands eloquently expresses his characters’ anxious, nonchalant or curious disposition. Lowry’s depictions of children are particularly perceptive; their movements, gestures and wonderfully accurate expressions are wholly contemporary and yet simultaneously timeless. His portrayal of teenagers during the Swinging Sixties is perhaps the most insightful, capturing with inimitable style the wonder and anxiety of adolescence.

Standing almost the height of the upright canvas with their taut, narrow forms in profile, Lowry’s two girls are a delightfully mismatched, near-identical pair with their reversed vermillion and Prussian blue clothes, shoulder-length sandy hair and enigmatic expressions. Their proximity and mirrored pose suggests the inseparable duo could walk in step and might have trouble parting. Leaning and looking towards her companion, almost as if conjoined, the figure on the right glances nervously at her friend, ready to follow her lead. This is the magic of LS Lowry; after the powerful initial impact, closer viewing reveals the deceptively simple image is exquisitely skilful, its protagonists intriguingly complex.