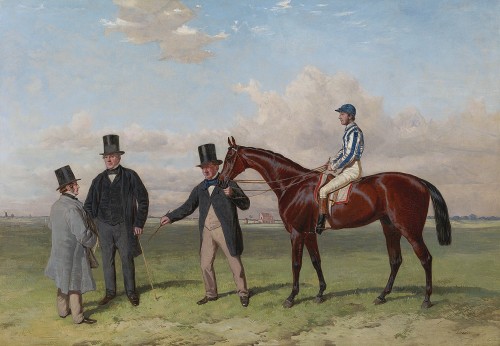 In an English semi-Carol style carved and gilded frame

Underhand was a bay colt by The Cure out of Contraction, foaled in 1854, according to The Druid, at the Consett Iron Works in County Durham and named after one of its operatives. He was owned by George Foster of Consett, who made his fortune in the iron trade. Underhand was unusually small, at slightly under fifteen hands. ‘His style of carrying his head very high, in his gallop, led to the belief that he could not stay. This was a great mistake, as was proved in his long races; but, in a waiting race, his great speed always enabled him to run through his horses, even under very heavy weights. Aldcroft rode him admirably, his tender and patient nursing enabling him to win if it was possible’[1].

In 1856 Underhand won the Mostyn Stakes at Chester. The following year he won the Cup at Manchester. Underhand won the Northumberland Plate, run at Newcastle, for three successive years in 1857, 1858 and 1859, coming second in 1860. The Druid commented: ‘no horse, save Underhand, ever ran in the same handicap for five out of his six seasons, and not only win it three times, but finish by being second’[2]. Underhand won the Queen’s Plate at Liverpool in 1860 and the Cup at Edinburgh in 1861, before retiring to the Stud.

The Northumberland Plate, often nicknamed the Pitmen’s Derby, was inaugurated at Newcastle Town Moor in 1833; the ‘Plate’ was made by Northern Goldsmiths. John Fobert, Underhand’s trainer, also trained The Flying Dutchman, which won the Derby in 1849. Thomas Aldcroft won the Derby on Ellington in 1856.

Harry Hall was probably the most prolific racehorse portraitist of his day and his paintings represent a strikingly modern contribution to this genre, when compared with many of his contemporaries.

Between 1838 and 1844, Hall lived in London, working in Tattersall’s and contributing to Tattersall’s British Racehorses and The Sporting Review. For a short period he became chief artist for The Field, and also contributed sporting pictures to The Illustrated London News.

Hall then moved to Newmarket and concentrated almost exclusively on painting portraits of racehorse, providing a pictorial documentation of the most notable horses on the English turf during the nineteenth century.