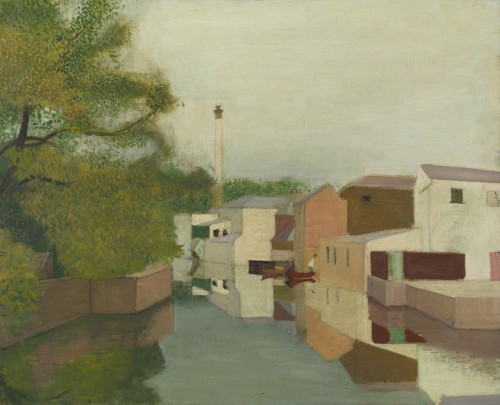 View on the Cam from Magdalene Bridge, Cambridge, no.2

View on the Cam from Magdalene Bridge, Cambridge, no.2

Signed on the canvas overlap: Pasmore

In a modern gessoed tray frame

Commissioned directly from the artist by Kenneth Harrison FSA

Mrs Michael Stanley, then by descent

Victor Pasmore executed two versions of this exceptional river scene, View on the Cam from Magdalene Bridge, Cambridge,[1]in addition to preparatory drawings, while staying at Cambridge as the guest of his commissioning patron, Kenneth Harrison. Though set in one of the most historic cities in the country, Pasmore selected an uncompromisingly modern view, as well as style of execution, inspired by the rectilinear shapes of the warehouses on Quayside. A superb balance of sky, water, architecture and nature whose crisp reflections accentuate the lines of perspective to the vertical accent of the chimney, the painting documents Pasmore’s development from representation towards abstraction. Though based on an actual landscape, Pasmore simplifies its forms, the buildings, punts and chimney, reduced to flat blocks of colour, become a geometric grouping of squares, rectangles and triangles, their structural formality counterbalanced by the soft colour palette and Pointillist foliage which trails over the walled gardens of Magdalene College.

1947 was a seminal year for the artist, the culmination of an exceptionally productive period living and working in Chiswick, rich in the work produced and also the speed of his artistic development. Pasmore studied the Old Masters as well as modern artists, resulting in important paintings such as The studio of Ingres, 1945-7 (private collection) and The Thames at Chiswick, 1943 (National Gallery of Canada, Ottawa). Pasmore was also fascinated by the Post-Impressionists – Cézanne, Seurat, Gauguin and Van Gogh, whose theories and techniques can be seen to inform the present work.

Pasmore explored the riverside subject in a series of works during this period including The quiet river: The Thames at Chiswick, 1943-44 (Tate, London), which Alan Bowness observes ‘is the first stage of Pasmore’s return to abstract painting; the fences, poles and noticeboards already work as abstract shapes in a formal composition without losing their objective quality’.[2] At the same time he painted a group of garden pictures including Riverside gardens, Hammersmith, 1944 (Arts Council Collection) and Snow scene, 1944 (The Ashmolean Museum of Art and Archaeology, Oxford) and continued, even after his move to Blackheath, with a series of four works which demonstrate the artist’s measured progression towards abstraction; The hanging gardens of Hammersmith No. 1, 1944-47 and The gardens of Hammersmith No. 2, 1949, are both in the collection of the Tate.

In his introduction to the artist’s catalogue raisonné, Alan Bowness describes the importance of View on the Cam and the group of paintings to which it belongs: ‘Such works are full of references to the masters of Post-Impressionism, especially to Cézanne and Seurat, whose practice and theory Pasmore has studied to good effect. A kind of pointillist brushstroke, multiple perspective effects, a conscious building of the composition upon the picture surface show the lessons learnt. At the same time the essential concern of Pasmore the artist now emerges very clearly, for the paintings are about structure and pattern, light and space, shape and colour. An abstract formal language of great strength, character and distinction has been created; it seems to be breaking through restrictions that even the vestigial representation of a garden scene or river bank imposes.’[3] The present work therefore signifies not only the end of one of the most important periods of Pasmore’s career, but also outlines the theoretical basis for all of his work to come. From 1948 the artist believed, ‘The only field which appeared open to rational development was in terms of purely abstract form.’[4]

View on the Cam from Magdalene Bridge, Cambridge No.1

Throughout his career Victor Pasmore earned an outstanding reputation as an artist, printmaker and architect. Born in Surrey in 1908, Pasmore was the son of a distinguished doctor. During his education at Harrow he was introduced to the works of the French Impressionists, but the death of his father prevented him from pursuing art as a career and on leaving school he went to work for the Public Health Department. He was, however, able to take evening classes at the Central School of Arts and Design where he met the director of the National Gallery, Sir Kenneth Clark.   In 1937, along with William Coldstream and Claude Rogers, Pasmore was one of the founders of the School of Drawing and Painting in Fitzroy Street which later moved to the Euston Road and became known as the Euston Road School which espoused a return to ‘objective nature’ and by 1938 Clark’s patronage enabled Pasmore to give up his job and become a full-time artist holding his first important one-man show at the Wildenstein Gallery in 1940.

Early influences were predominately the Fauves and Cubists and in particular the work of Matisse and Picasso, but as his career developed he increasingly rejected the more traditional representation of nature that had preoccupied his earlier work and began to explore more abstract forms adopting a more scientific approach to his art. The discovery of Charles Biederman’s book ‘Art as the Evolution of Visual Knowledge’ encouraged a shift in his artistic perspective and he began to work more in relief, as well as developing an interest in architecture.   In 1954 he was appointed Director of Painting at the University of Newcastle and began a major project redesigning the layout and architecture of Peterlee new town that was to last more than 20 years.

Throughout the 1960’s Pasmore continued to work with abstraction creating masterful works constructed of amorphous shapes and controlled lines. He held a series of retrospective exhibitions in some of the most important international museums. In the introduction to a major exhibition of Pasmore’s work at the Tate Gallery in 1965, Ronald Alley, in assessing Pasmore’s work, wrote:  ‘although Pasmore has covered a great deal of ground in his time, there are certain qualities which are common to all his work, such as lyricism, extreme refinement of taste, and a feeling for light and space. There is behind his work a restless, inquiring intelligence which is constantly probing in different directions but nevertheless, the work has an underlying unity.’

[1] View on the Cam from Magdalene Bridge, Cambridge, no.1 (private collection), is a slightly larger version of the same scene, listed in the catalogue raisonné, as no.115.