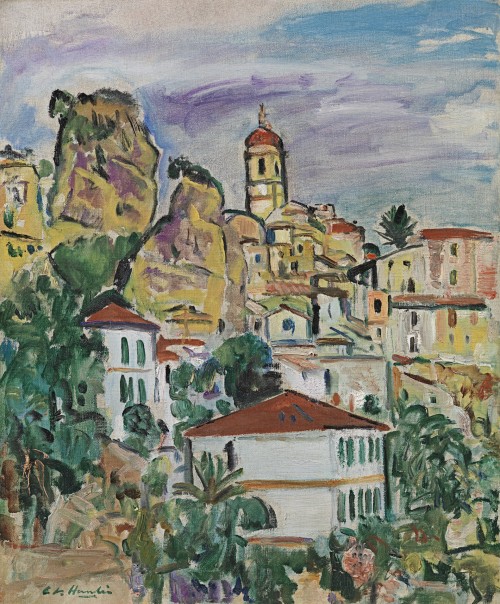 private collection, Cambridgeshire, then by descent;

‘This is a painter’s country.’ George Leslie Hunter[2]

Painted at the height of his maturity, George Leslie Hunter’s Villefranche brilliantly evokes the warmth, light and landscape of the Provencal/Alpes-Maritime region. Though renowned for its charming harbour on the Côte d’Azur between Nice and Monaco, Hunter’s glorious townscape looks inland to the dramatic, surrounding hills. With bold delineation and strong areas of rich colour, Hunter skilfully combines nature and architecture in his confident and sophisticated design. From the spire of what could be the tower of Eglise St Michel, the cluttered streets weave across the wooded slopes, interspersed with rocky outcrops and lush vegetation; the dark, luxuriant foliage and bright blue, cloud-strewn sky, adding depth and contrast to the terracotta roofs, ochre and pastel hued houses. With vivacious brushwork, Hunter captures the fresh immediacy of the view, which perfectly balances the strength of his highly developed use of line and colour in this powerfully captivating image.

On the advice of his friend and fellow Scottish Colourist, SJ Peploe, Hunter spent the best part of three idyllic years in the south of France from 1927[3]-1929 and fell in love with the region, producing works of extraordinary colour and vitality.[4] Writing to his friend, Matthew Justice, the artist declared, ‘I’m in love with this country…I am sorry I did not discover it sooner. It must be the best part of Europe with sunshine every day, fruit, flowers, fine colours and everything the heart could desire.’[5] Hunter rented a small studio attached to the Auberge de la Colombe d’Or in St-Paul-de-Vence, a few miles north of Nice, which acted as his principal base in the area while exploring locations along the Mediterranean coast between Marseilles and Roquebrunne-Cap-Martin; Cassis, Toulon, St-Tropez, Ste-Maxime, St-Raphaël, Golfe-Juan, Juan-les-Pins, Antibes, Nice and Villefranche-sur-Mer, all feature in his paintings and drawings.[6]

As Bill Smith and Jill Marriner suggest, ‘For Hunter it was a breath of fresh air. The change of location brought about a radical shift in his painting. He did not abandon what he had gained from his analysis of the work of Cézanne and Matisse; rather it was the dramatic landscape, bright sunshine and outdoor life engendering in him a renewed sense of purpose and direction.’[7]

For his biographer and friend, TJ Honeyman, Hunter ‘was absorbing all the colour with a feeling akin to rapture as if he was beginning to realise some entrancing dream...He was convinced that his work in design and colour showed a maturity lacking in his earlier efforts, and he knew how to make use of the wonderful sunlight and glitter of the Riviera scene.’[8]

To the consternation of his dealers, Hunter initially recorded his favourite subjects with sketches and drawings, such as Villefranche, c.1927 (The Fleming-Wyfold Art Foundation), explaining that, ‘Peploe thought my plan of making innumerable drawings to learn the country an excellent one.’[9] By 1928, he began to capture the luminous scene in paint on canvas and exhibited his new work at his first one-man show in London at the Lefevre Galleries in October. For The Times, ‘His designs are firm, well balanced, energetic in movement, and lively in colour’, while Art Weekly commented, ‘he suggests with great skill the wonderful sunlight and glitter of Riviera scenery…there is power, atmosphere and wonderful colour. This is a show to be seen.’[10] In spring the following year, Hunter travelled to New York where he held another solo exhibition, primarily landscapes of the south of France, at the Ferargil Galleries, which was well received by the American Press, the New York Times review commenting: ‘Mr Hunter’s strongest point is his colour, which is gay and attractive, attaining a luscious brilliancy…He is one of those artists in whose style spontaneity plays a large part.’[11] He returned to St-Paul in the summer of 1929, but his final stay was marred by illness and by the end of the year he was back in Glasgow.

Having remained in a private collection since the 1930s, Villefranche exemplifies Hunter’s love of the south of France and its power to inspire some of the best work of his career. As Smith and Marriner declare, ‘From here his work moves into a maturity rich in colour and expression… Despite his radical change in style, these paintings brilliantly retain the harmony and vitality that had long been Hunter’s hallmark.’[12]

Often considered the most natural of the Scottish Colourists, George Leslie Hunter was primarily a self-taught artist, renowned for this bohemian appearance, eccentric behaviour and above all, his unwavering devotion to art. The son of a dispensing chemist, he first attended Rothesay Academy, but in 1892 his father decided to emigrate to California, where Hunter remained until 1906. During these years he worked as an illustrator for Californian newspapers and magazines, and it was his innate skill as a draughtsman that was later to provide the foundation of his talent. His first one-man exhibition was due to open in San Francisco in 1906, but all the works destined for his show were destroyed by the earthquake.   Devastated by this disaster, he returned to Scotland where he became acquainted with Alexander Reid, at whose gallery he held an exhibition in 1916.

In 1922, Hunter visited Paris, Venice, Florence and the Riviera Coast, often joined by his friend and colleague John Duncan Fergusson. Following their return, he settled in Fife and painted still lifes and landscapes, many of which were inspired by the house boats at Loch Lomond. Hunter spent much time during subsequent years in the South of France, painting at Saint Paul de Vence, Cassis and St Tropez between 1927-1929. His visits abroad proved highly productive and he exhibited much of his recent work at the Ferargil Galleries, New York in 1929, an exhibition that won him considerable critical acclaim. The instability of Hunter's health however, seemed insurmountable and that same year he suffered the most serious of his breakdowns. Although he continued to paint and produced some of his finest and most sensitive works during these later years, Hunter died after an unsuccessful operation in 1931.

[1] Senior physician at the South London Hospital for Women, Sibyl Eastwood was the first woman to take the Oxford DM. As a young woman, she was a journalist for The Daily Mail. See https://www.bmj.com/content/3/5665/303

[2] Writing to his dealer, McNeill Reid, Hunter declared: ‘I like this country very much and am sorry I did not come here six years ago in place of going to Fife. I feel six months here was worth six years there.’ Cited in TJ Honeyman, Introducing Leslie Hunter, Faber and Faber, London, 1937, p.119.

[3] Derek Ogston, Leslie Hunter 1877-1931: Paintings and Drawings of France and Italy, Baillieknowe Publishing, 2004, p.41: ‘There is no record of the precise date of Leslie Hunter’s arrival in the south of France, but it was probably near the end of 1926.’ Bill Smith and Jill Marriner suggest it was in the spring of 1927, Hunter Revisited: The life and art of Leslie Hunter, Atelier Books, Edinburgh, 2012, p.131.

[4] TJ Honeyman, op.cit., p.118: ‘Peploe had been talking for some time about going to Cassis in the south of France; Fergusson, of course, spent most of his time there.’ During his stay, Hunter spent time with both Peploe in Cassis and Fergusson at Antibes. Smith and Marriner suggest, ‘The additional attraction of artists of the stature of Matisse and Segonzac being based in the south of France probably was the deciding factor.’ Hunter Revisited, op.cit., p.129.