Mr ASR Armitage, acquired from the above in 1964, then by descent

Private collection, acquired from the above, 2015

On first seeing this painting, the viewer’s eye is likely to focus on the two sculptural masses, grey-green and black, on the left and in the centre of the canvas, intriguing shapes that don’t give much away. The eye then follows the curving trail of white from above the green mass, under the black, to the next largest colour shape that combines both green and black, but is made up of more complex brushstrokes and is indeterminate in outline. Here, reassuringly, is to be found the first clue: exquisitely delicate willow leaves, darting to left and right, pointing this way and that, so that the eye gradually completes its journey over the picture, only to begin all over again, this time less hurriedly, lingering over details and colours, slowly making sense of the whole.

This scanning of the two-dimensional surface pattern of the canvas and an appreciation of it purely in terms of colour-shape, space and rhythm before any attempt to correlate these with a particular landscape subject, are what Hitchens hoped for from his ideal viewer and explains why he insisted that his work was essentially abstract.

By 1963, the year of his seventieth birthday and of a retrospective exhibition of over 170 works at the Tate, Hitchens had largely freed himself from the representational—the precise shape of trees and bushes, ponds and distant hills was now less important than the interacting pattern of shapes and the varying strength and direction of brush marks. Equally, his colour vision had grown more complex and his colour range ever wider in answer to the compositional demands of the canvas design as an entity in itself. The blue overlapping magenta in the top right of this painting illustrates this and the perhaps surprising variety of blues, artfully distributed over the canvas, bespeaks the inborn colourist.

Though his painting language was now less obviously representational, the titles he gave to his pictures remained specific. We may be sure that a particular conjunction of water, dark trees and willows was the starting point of this picture and that the artist, even as he built up its dynamic structure, kept what he actually saw before him as a constant control, thereby striving to achieve a balance between picture and nature.

After graduating from the RA Schools, Hitchens moved into a studio at 169 Adelaide Road, Hampstead in 1919 and later became part of a circle of avant-garde British artists including Barbara Hepworth, Henry Moore, Paul Nash and Ben Nicholson living in Hampstead in the 1930s. In 1920 he exhibited at the first exhibition of the Seven & Five Society, becoming a member that same year. Hitchens was elected a member if the London Artists’ Association in 1929, of the London Group in 1931 and of the Society of Mural Painters in 1937. The artist exhibited with the Leicester Galleries from 1940 until 1960, when he moved to the Waddington Galleries.

In 1951 the artist won a purchase prize at the Festival of Britain exhibition, 60 paintings for ‘51.  Hitchens completed a mural at Cecil Sharp House, Regent’s Park Road in 1954, and installed another mural at University of Sussex in 1962.  In 1956 the British Council arranged a retrospective exhibition of his work for the Venice Biennale.  In 1957 Hitchens was created CBE. A major retrospective of Hitchens’ work was arranged by the Arts Council at the Tate Gallery, London in 1963. In 1979 a third retrospective exhibition was held at RA Diploma Galleries. 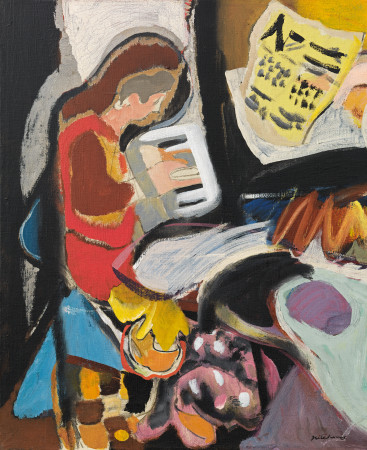