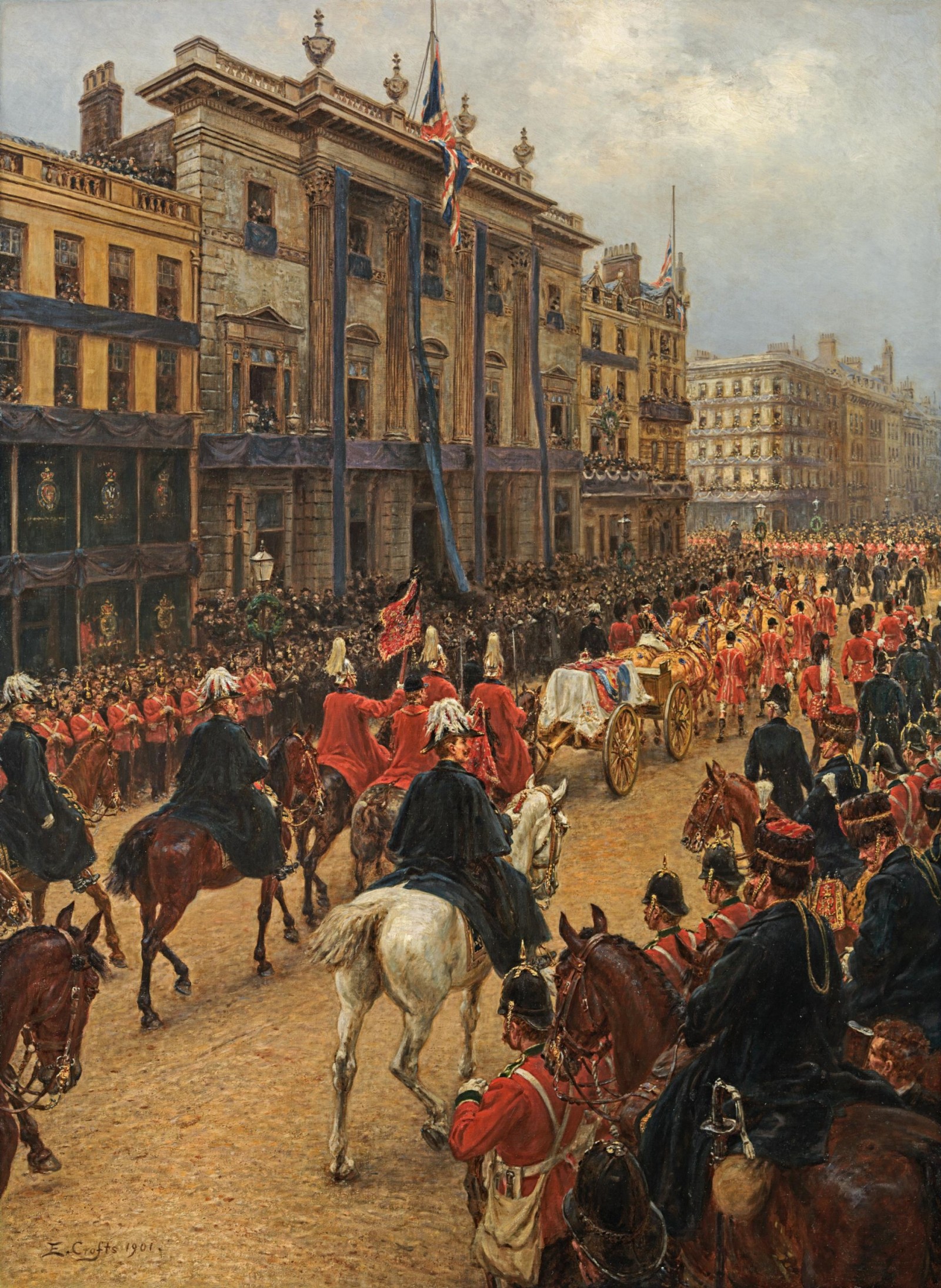 No-one could fail to be moved by the funeral of Queen Elizabeth II on 19th September 2022, after a reign of seventy years. The sad but beautiful ceremony in which she was honoured by her family, her Armed Forces and thousands of her subjects, was unforgettable. The day emphasized the uniqueness of the Monarch and the continuity of the Monarchy. Royal funerals may be founded on tradition, but each is also different, as Edward Crofts’s painting of The Funeral of Queen Victoria demonstrates.

When Queen Victoria died at Osborne House, Isle of Wight, on 22nd January 1901, none of her courtiers had any personal experience of the funeral of her uncle William IV, who had died sixty-three years previously. There were, of course, no photographs of the event, and unlike the meticulous arrangement for the funeral of Queen Elizabeth II, very little forward planning. The Queen’s Assistant Private Secretary, Sir Frederick Ponsonby, recalled ‘no one seemed to know what the procedure was…we spent the evening looking up what had been done when George IV and William IV had died’.

Queen Victoria desired to be buried with military honours and the funeral was to be white. The Queen was dressed in white, wearing her wedding veil, a symbolic reunion with Prince Albert whom she had mourned in black for forty years. The gun carriage bearing the Queen’s coffin was draped in white, pulled by white horses. It was the first time that a gun carriage had been used for a Monarch’s funeral, a tradition that has continued to the present.

Queen Victoria’s body was brought from the Isle of Wight to Gosport on board the Royal Yacht Alberta and conveyed by train to Victoria station. Ernest Crofts depicts the solemn pageantry of the funeral, held on the bitterly cold 2nd of February 1901. The procession makes its way up St James’s Street, past the Devonshire Club, hung with black. There was no public lying-in-state, so thousands thronged the streets to catch a last glimpse of the Queen for whom most was the only monarch they had ever known. Behind the gun carriage rides King Edward VII, flanked on the left by his brother Prince Arthur, Duke of Connaught and on the right by the German Emperor Wilhelm II, Queen Victoria’s grandson. Crofts, a celebrated military painter, evokes the spectacle of black-clad civilians and scarlet Guards and Household Cavalry, all united in reverence.

The procession turned west into Piccadilly and then to Paddington, where a train conveyed Queen Victoria to Windsor for the funeral service at St George’s Chapel, Windsor Castle. At Windsor, a trace on the gun carriage broke, causing the horses to shy. They were quickly unhitched and the carriage was borne to St George’s Chapel by sailors, a practice which has continued with every State funeral since. After two days’ private lying-in-state, Queen Victoria was buried in the Royal Mausoleum at Frogmore, beside her beloved Prince Albert.