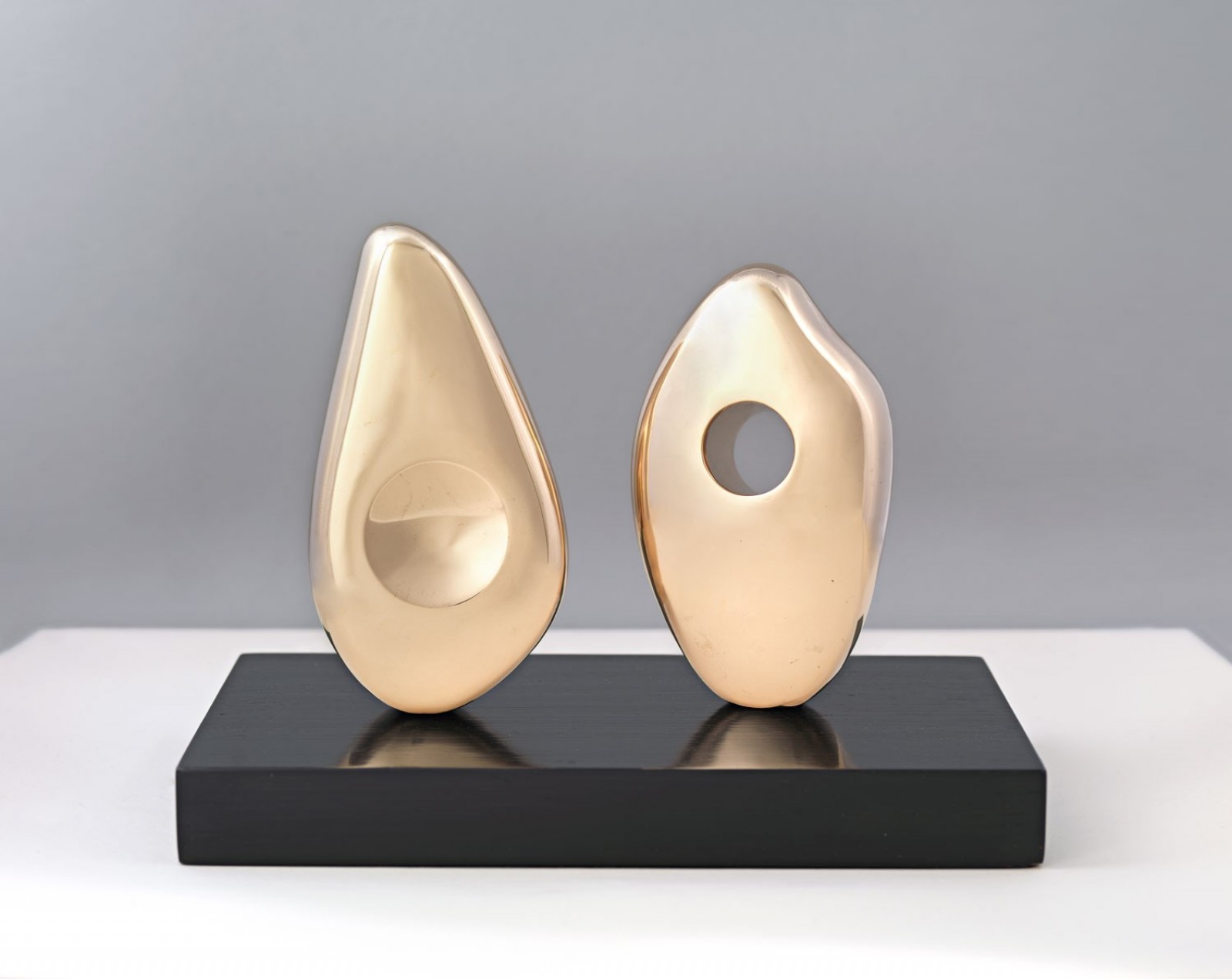 A sculptor of great importance

Though little known in France, Hepworth, who along with second husband, Ben Nicholson, spent time in French artistic circles visiting Brancusi, Picasso, Braque and Mondrian, revolutionised sculpture with her new aesthetic for a modern world. Imbued with poetic purity, her abstract works aspire to an ideal, peaceful world. The exhibition was the Musée Rodin’s tribute to Hepworth’s important sculptural practice and an opportunity for her work to be shown to a wider, international audience.

Marble Form (Coré), 1955, in title and material refers to Archaic Greek female figure sculpture of the sixth century BC, known as ‘kore’ or ‘korai’ (‘koré’ or ‘coré’ in French) which Hepworth saw on her visit to Greece in the summer of 1954. Writing in her Pictorial Autobiography, Hepworth recalled: ‘In Greece the inspiration was fantastic. I ran up the hills like a hare, with my notebook, to get there first and have the total impact of solitude…Saw a magnificent Koros – tall, fierce and passionate, bigger than life-size – in the museum. A heavenly work – the back and buttocks in relation to the hip and waist – an inspiration.’ Chris Stephens offers further insight on the importance of the trip: ‘Though her Greek notebooks reveal, above all, her fascination with the sensuous experience of the landscape, she was also attracted by the tradition of sculpture that united her and the classical sites she visited.’ The artist’s granddaughter and author of the forthcoming Hepworth catalogue raisonné, Sophie Bowness, adds: ‘She owned a postcard of a marble kouros torso c.550BC from Actium in the Louvre, which she may have bought on a visit to Paris before the war. Her Coré shares the upright stance, poise and sensuous curves characteristic of Greek korai.’

The gallery was also delighted to lend Barbara Hepworth’s, Two forms (Orkney), to the Heong Gallery’s exhibition, which responded directly to Hepworth’s large-scale bronze sculpture, ‘Two forms (Divided Circle)’, 1969, a cast of which is on loan to Downing College from the Hepworth Estate. Visible in the College grounds through the Gallery windows, the sculpture stood in dialogue with the exhibition’s featured works by Hepworth, made in the later stages of her career. Divided Circle explored Hepworth’s sculptural language of asymmetry, dualities, movement and spirituality, as well as the centrality of the human form and scale. These ideas are especially meaningful in the context of Hepworth’s life in the late 1960s and in relation to the rapidly changing social-political landscape; the exhibition suggested there is still much to learn from Hepworth’s human-centred approach to sculpture.

Hepworth described the 1960s as ‘a fulfilment of my youth.’ The variety of surface, scale and material in her sculpture from this period is extraordinary, from African hardwood, sheet brass, copper, slate and marble to polished and patinated bronze. Perhaps the most significant, even surprising, development occurred in 1956, when Hepworth began to work in metal, creating sculpture in plaster to be cast in bronze. Two forms (Orkney), in polished bronze, followed Hepworth’s exquisite slate sculpture of the same title, now fittingly at the Pier Arts Centre, Stromness. Commemorating the close friendship between Hepworth and her patron, Margaret Gardiner (1904-2005, the founder of the Pier Arts Centre), the sculpture also alludes to the extraordinary Neolithic monuments of the northern Scottish Isles, close counterparts of the standing stones of the Penwith peninsular in West Cornwall. As Sophie Bowness writes, Hepworth’s small polished bronzes are ‘characterized by a sensuous, golden finish. They illustrate a new richness in her later work.’

To find out more about, Two forms (Orkney), and other sculptures for sale by Barbara Hepworth, please follow our link here.

You can read more about Hepworth and the Heong Gallery exhibition in ‘Barbara Hepworth: A Line of Inquiry’ by Corinne Julius and curator, Rachel Rose Smith, as part of Toast Magazine https://www.toa.st/magazine/barbara-hepworth-a-line-of-enquiry.htm

For more information on Hepworth, we recommend listening to Sculpting Lives: Barbara Hepworth, the first part of the Paul Mellon Centre’s podcast series on six women artists, ‘creating intimate soundscapes of their private and public worlds’, written and presented by Jo Baring (Director of the Ingram Collection of Modern British & Contemporary Art) and Sarah Turner (Deputy Director for Research at the Paul Mellon Centre for Studies in British Art in London) https://www.paul-mellon-centre.ac.uk/about/sculpting-lives-episodes